The World Health Organization recommended the re-scheduling of cannabis and some of its main components, recognizing the plant’s medical potential and acknowledging the need for further research around it, only days after the Israel approved a plan to export cannabis. On the markets front, Slang Worldwide Inc SLNG started trading in Canada.

“The successful SLANG Worldwide IPO is just what the cannabis community needed,” Debra Borchardt, CEO of Green Market Report, told Benzinga. “So many of the IPOs and RTO's we've seen over the past six months have been busts. The stocks fell below the initial stock pricing and found it hard to get strong support in the market. Slang's share rose 33 percent on its first day. Either it was priced too low or investors saw a real opportunity here.”

Here are some of the top marijuana stocks (market cap above $300 million) in U.S. exchanges and how the performed over the last five trading days:

After evaluating the portfolio of cannabis companies of Phyto Partners and investing in the fund, search marketing industry pioneer Jeff Herzog offered to join Phyto’s Board of Advisors. Herzog will also be a source of deal flow for Phyto to harvest new investments from, said managing partner Larry Schnurmacher.

“Jeff’s extensive career building companies using SEO and digital marketing will translate incredibly well to the emerging cannabis industry and help cannabis related companies navigate the digital world, even with restrictions and rules that prevent cannabis companies from advertising and marketing like other companies are able to,” Schnurmacher told Benzinga.

“I look forward to seeing how the cannabis industry fits into our culture globally five to 10 years from now, and I am thrilled to be a part of the community at this stage in its growth,” White told Benzinga.

Ahead of the Super Bowl, Forbes feautred several former NFL players and Super Bowl champions calling for a change in the league's policy to bar its athletes from medicating with cannabis or hemp derived CBD. In a message for commissioner Roger Goodell, Cullen Jenkins said the league is "playing with people's lives, with people's well being," and called for the NFL to become a leader in cannabis.

"The NFL is a leader, a role model. If they took a step in the right direction with cannabis, other people would start to take notice and learn about the medical benefits of cannabis," he said.

GrowGeneration Corp. GRWG, one of the largest chains of specialty hydroponic and organic garden centers, announced the acquisition of Chlorophyll, Inc., a Colorado superstore, with over 20,000 sq. ft. of warehouse, and retail space.

CEO Darren Lampert told Benzinga this transaction marks the company’s first acquisition in 2019, adding $8 million in revenue. “Adding Chlorophyll...adds one of the largest and highest volume hydroponic stores in the country. Chlorophyll has a seasoned team, and we are excited that the founders, Beau Speicher and Lee McCall will continue to support the company in a sales and business development role.”

Cannabis investment firm Treehouse Global Ventures announced the addition of Emily Paxhia of Poseidon Asset Management and Tahira Rehmatullah of MTech Acquisition Corp. MTEC to its Senior Advisory Board, joining the firm’s founders Lindy Snider, Gaynell Rogers, and Lori Ferrara, to create a women-led marijuana investments powerhouse. It’s worth noting that both Rehmatullah and Paxhia were included in Benzinga’s recent list of “20 Women Set To Dominate The International Cannabis Space In 2019.”

One of the fund’s founders, Lindy Snider, said, “We are delighted to add Emily and Tahira to our senior advisory board and look forward to many collaborations around the country and the globe with these two gifted women leaders.”

“We are proud to extend AXIM’s portfolio of intellectual property with this new patent on oral care compositions comprising cannabinoids,” said John M. Huemoeller, CEO of AXIM Biotechnologies. “This patent aligns with AXIM’s strategic advantages in terms of adding additional proprietary delivery mechanisms for cannabinoid-based products and the company could benefit from its use in both our nutraceutical and pharmaceutical product development programs.”

The Flowr Corporation FLWPF opened up two new revenue streams. The company began selling its premium cannabis in Manitoba and announced plans to sell cannabis plant clones and seeds. Manitoba is the fifth province to carry Flowr products and dispensaries there will have access to four of Flowr’s premium strains.

A bigger opportunity may be in supplying other large growers. Flowr recently announced plans to sell clones in volume to other established Canadian growers, the new micro- or “craft” cultivators being licensed in Canada and for export, in addition to Canada’s home-grow market. The company said it can produce more than 3.2 million high quality clones annually once its cultivation facility is completed later this year.

“There’s a huge amount of cultivation space coming online in Canada and around the world over the next few years and that requires high quality starter material -- seeds or clones -- to actually start producing cannabis,” Vinay Tolia, Flowr’s co-CEO told Benzinga. “For a company like Flowr that has both great genetics and the capacity to produce a large volume of clones, it could be a very big revenue opportunity.”

RYAH Medtech, a wholly owned subsidiary of PotBotics Inc., announced a partnership with Green Revolution to launch its dose-standardizing vaporizer in Washington state. David Goldstein, CEO of Potbotics said his company is “excited to be launching RYAH in Washington state with Green Revolution. We strongly believe that the medical and wellness market in WA will greatly benefit from our dose measuring vaporizer by bringing transparency, personalization, and high quality experiences via Green Revolution's great product line."

CBD Unlimited EDXC announced a joint venture with GFe Inc. The companies are establishing a “Special Purpose Vehicle” designed to combine the technology and CBD initiatives of both companies to further accelerate their expansion into international markets. The companies said they plan to file for an IPO on a major international stock exchange.

Todd Davis, CEO of CBD Unlimited, told Benzinga, “CBD Unlimited established an international business hub based in Jamaica to allow our products and technology to be distributed from a fully legalized federal jurisdiction. Partnering with GFE based in Ontario, Canada, who has business footprints in markets in which intend to distribute was an obvious benefit... Through an Initial Public Offering of our international operations, CBD Unlimited, Inc. shareholders will gain optimal share value. Every shareholder of the company will benefit by allowing the company to properly bank its operational and infrastructure growth. GFE brings technology solutions and networking solutions that will help expedite the growth prospects of this international go to market strategy.”

“True Leaf has been able to grow from a Canadian startup to a global brand because our hemp-based supplements for pets are 100 per cent legal in all markets,” said Darcy Bomford, founder and CEO of True Leaf. “CBD for pets is hot right now, but we remind consumers and investors that the CBD pet products you see on the market today are not regulated or legal. Our True Hemp product line for pets has gained worldwide popularity because it is quality-controlled, legal, safe and effective.”

Chemesis International Inc. CADMF subsidiary La Finca Interacviva-Arachna Med announced plans to commence construction of its GMP certified extraction facility before the end of the first quarter of this year in Bogota, Colombia.

“We are extremely pleased with La Finca and the progress it has made in such a short period of time,” said CEO Edgar Montero in statement. “The Company's certified extraction facility will allow the Company to service both domestic and international markets with a variety of finished goods, for its in house and third-party brands.”

“New Highs CBD was created to elevate hemp tinctures and offer an approachable, discreet solution as part of your wellness tool kit. I’m excited to offer a premium brand to consumers who share in our mission towards the path of a productive lifestyle utilizing the healing properties of CBD,” said Remesch.

“The joint venture we announced this week with our partners, Khiron Life Sciences, allows Dixie the opportunity to be first to market with our diverse portfolio of cannabis-infused consumer packaged goods in one of the fastest growing cannabis markets in the world. [W]e look forward to working alongside our new partners to bring Dixie’s broad THC and CBD portfolio to the 650 million consumers throughout Latin America,” said Chuck Smith, CEO and Co-Founder of Dixie Brands Inc.

According to Viridian Capital Advisors’ Viridian Cannabis Deal Tracker, the cannabis industry saw $686.1 million in investments in the first 25 days of 2019. This compares to $820.6 million in the same period last year. While investments were lower than in 2018, the average size of raises jumped from $14.9 million to $22.9 million.

Arcview's Troy Dayton goes into the available investment tiers, best practices for raising capital, and how to interest investors by honing your winning pitch (and avoiding common presentation errors).

This video was originally posted on Green Flower.

Over the week, Benzinga reported on: 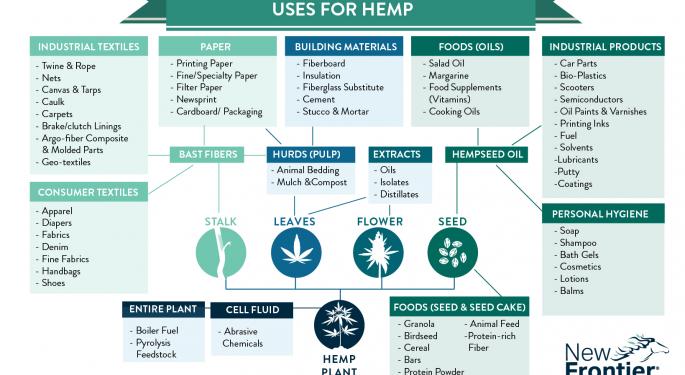 Alex Oleinic’s view on supercritical CO2 extraction and its future in the marijuana industry.

Feb. 4: Shine Papers will hold its nationwide Shine Day contest, with a total of 19 cities across the country taking part in the adventure.

Inspired by Amazon’s Prime Day, Shine Day sends participants throughout their respective cities, in a scavenger hunt- style race for the ultimate prize of the famed “gold briefcase” - filled to the brim with Shine, Pure Leaf and Blaze By Shine swag. CEO Dave Brown told Benzinga, “Our customers are the best out there and we don't take their loyalty for granted. Shine Day is our way of giving back to our clientele. It's a ‘thank you’ for riding with us and a glimpse into the exciting things we have in store.”

Feb. 12–13: CannaTech brings some the world’s highest caliber players in cannabis to an event focused on medicinal marijuana and all the opportunity within.  This is a golden opportunity to network with the bigger players already maneuvering in the Central and South American region, the organizers explained. But, why Panama?

“The cannabis industry in Latin America is projected to reach $12 billion within the next 10 years, as medical cannabis begins to legalize across the region and regulations shift, worldwide. Due to its geographical placement, tax regulations, and longstanding position as a major throughway for international trade, Panama has the potential to be the center of the Latin American cannabis industry."

Feb. 27: CannaImpact and Nextage Innovation announced their first annual Cannabis Tech Pitch Night, to take place in Tel Aviv, Israel. The purpose of this Pitch Night is to ignite innovation in the medical cannabis and tech industry and to provide pioneering startups with exposure to technology leaders, investors, and potential partners, the organizers explained. The winning startup will receive a complimentary creative package to help push their venture forward, as well as mentoring from cannabis industry leaders.

May 28 – June 1: The Cons is a gathering of three trade and fan shows, the Cam Con, the Cannabis Con, and the Inked Con, all under one roof, at the SLS South Beach Hotel in Miami Beach, Florida. The Cons 2019 will offer a variety of seminars with top industry panelist, networking parties and performance displays to benefit the industry’s content providers, models and affiliates. While these industries have differences, in many ways they overlap.