If Wall Street had a seat belt sign, now’s when the captain would tell us to buckle up for possible turbulence ahead.

Even if earnings season didn’t begin tomorrow, there’s plenty to keep investors on their toes. Amazon.com, Inc.’s AMZN Prime Day, Apple Inc.’s AAPL long-awaited product event, continued stimulus negotiations in Washington, and mounting virus cases in the U.S. and Europe all get mixed into the recipe.

Ordinarily, those ingredients would be enough for anyone, but this time it’s happening while investors and the entire world have one eye on polls three weeks ahead of the U.S. presidential election. Despite all this, volatility is the lowest since late August. We’ll see if it stays that way as this thick stew of news flows freely in coming days. With so much coming up, it’s unlikely we’ll see any real trend in the market today unless, of course, there’s news from Washington.

Which brings us to the broken record department, where stock futures rose this morning amid continued hopes of a stimulus agreement. That was last week’s theme and it continues into this week. Negotiations over the weekend had a mixed tone, so it still feels like anything can happen.

Think a stimulus isn’t worth all the Wall Street fuss? Late last month, Goldman Sachs Group Inc GS cut its Q4 gross domestic product (GDP) forecast in half to 3% when it appeared all hopes of fiscal help were lost. No word yet on whether that gets revised if Congress and the White House get something done.

Early strength could partly be a stimulus play, but it also might reflect optimism ahead of earnings. Last earnings season featured many companies beating low Wall Street expectations. Once again, expectations are on the low side, with analysts predicting an average S&P 500 earnings decline of 20.5%, according to research firm FactSet.

Earnings season kicks off this week, and first up … banks. By the end of this week, we’ll have a mostly-complete picture of the state of our top financial institutions as pretty much all the biggies report—JPMorgan Chase & Co. JPM, Citigroup Inc C, Bank of America Corp BAC, and Wells Fargo & Co WFC—investment banking powerhouses GS, Bank of New York Mellon Corp BK and Morgan Stanley MS, as well as money manager BlackRock, Inc. BLK. And that’s just to name a few.

Considering the reach these institutions have into the flow of money in and around the economy—from M&A to home and auto loans to credit card purchases and more—these Financials could set the tone for the earnings season ahead. The short answer ahead of bank earnings is that expectations are lowered relative to last year—a fall of 19.4% according to FactSet—but this Q3 estimate is quite a bit better than it was a few months ago when they predicted a fall of 34.4%. So there’s that.

JPM usually sets the tone for bank earnings, and its earnings call featuring CEO Jamie Dimon is often a big draw. That’s all on deck for early Tuesday. Citigroup and BLK are the other major financial institutions expected to report tomorrow morning.

In general, banks have been aggressively allocating funds for loan losses related to the pandemic. So it’s possible that much of the bad news is baked into the earnings cake, which could leave room for upside surprises. That could be positive for the market in general, especially if it comes amid a fresh round of stimulus.

But on that topic, the outlook is still fuzzy. Both sides blamed each other over the weekend for failure to reach a deal.

The markets seem to continue to be riding on the hopes of a fiscal stimulus package and COVID-19 treatment or vaccine. In the short-term, markets are likely to be optimistic about any developments on both fronts.

Speaking of snapshots, a few storylines from the end of last week could hint at the future—trends in viral treatment, retail sales, and entertainment.

Last week we got some pretty good news from the pharmaceutical companies. Gilead Sciences, Inc. GILD said that their drug remdesivir could speed up recovery from COVID-19. Eli Lilly And Co LLY announced it has an antibody cocktail that may give hopeful results. LLY’s cocktail is similar to that of Regeneron Pharmaceuticals Inc REGN, which is looking to get emergency authorization for its antibody. So overall, lots of news in the virus development space that could take front and center in the weeks to come.

While none of these is guaranteed, and nothing is imminently available for wide-scale distribution, this type of progress helps consumers and investors see the light at the end of the pandemic tunnel.

These developments in possible treatments don’t necessarily mean people will be out and about any time soon. We’re likely to continue seeing people shopping online, especially as we head toward the holiday season. Amazon.com, Inc.’s AMZN Prime Day is scheduled for Tuesday and Wednesday but the special deals are already being publicized so people can start filling their shopping carts. What might this mean for Black Friday and the “traditional” shopping season? Stay tuned. In 2020, game-changers seem to lurk around every corner.

There’s also the entertainment industry. During Q4 we typically see new movies released prior to the holidays. This year those movies are likely to be enjoyed from the comfort of your home. Walt Disney Co’s DIS Pixar announced that their latest movie “Soul” will go straight to streaming. Recall that last week Regal Cinemas announced it would once again close its theaters as COVID-19 slows the rate of new releases. If and when we get to the other side of the pandemic, many in the entertainment world are wondering what the “new normal” might look like.

Oh yeah, one more thing. AAPL’s event is officially on the calendar tomorrow. Invitations featured the phrase “Hi, Speed,” hinting at a long-rumored upgrade that would allow the iPhone to connect to the new 5G wireless network that’s currently being rolled out by carriers in the United States and abroad. That’s according to CNN.

Tomorrow we’ll find out if media got the hint, so to speak. AAPL shares slid after the company’s last event, so beware that things could go up or down, depending on how happy investors decide they are with AAPL’s new offerings.

Want something else to hang your hat on? Look no further than the red-hot chipmakers. The Philadelphia Semiconductor Index (SOX) took out the all-time high close of 2370 on Friday, hitting 2403 before settling at 2398 (see chart below). For those keeping score at home, that’s up 18% year-to-date, and about double the March low.

What’s happening here? It looks to be a confluence of events. Topping the news Friday was a Wall Street Journal report that Advanced Micro Devices, Inc. AMD was in “advanced talks” to acquire rival chipmaker Xilinx, Inc. XLNX in a deal reportedly worth $30 billion. Though AMD shares slipped on the news, XLNX shares soared, as did several other SOX components, as it seems to bode well for the future.

Marvell Technology Group Ltd. MRVL jumped 5% to an all-time high after its “analyst day” Thursday got a warm reception, and ON Semiconductor Corp ON had a monster two-day rally after positive comments from activist investor Starboard Value. And also hitting a new high is NXP Semiconductors NV NXPI after the company updated its forward guidance to the plus side.

In some ways, semis—and the Tech sector in general—are riding the perfect wave in 2020. Regardless of when (or if) the workforce heads back to the office and students return to classrooms, the need for fast, powerful, always-on and always-streaming tech has never been more acute. And it’s all powered by those little chips. 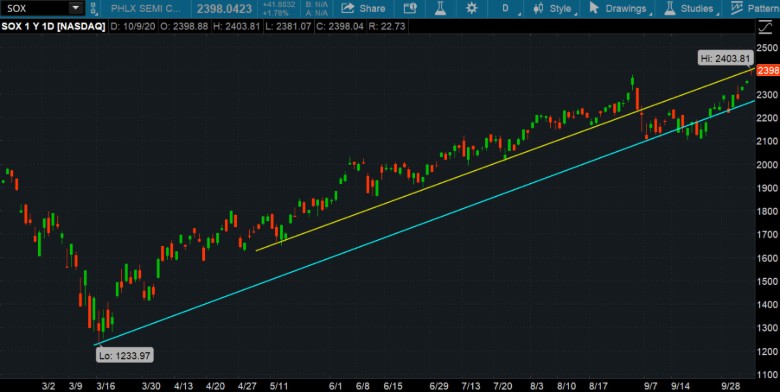 CHART OF THE DAY: A TALE OF TWO TRENDLINES. The Philadelphia Semiconductor Index (SOX–candlestick) has pretty much been on an upward trend since its March low of 1234, even after its September pullback, as seen by the longer-term trendline (blue line). There were only a few days in late September when the index fell below the trendline. But if you look at the shorter-term trendline (yellow line), SOX is looking like it could break out above it. If it does, it could indicate a continuation of shorter-term strength. Otherwise, look for consolidation within the two trendlines. Data source: Nasdaq. Chart source: The thinkorswim® platform from TD Ameritrade. For illustrative purposes only. Past performance does not guarantee future results.

Twenty Basis Points Away: The last few sessions saw the 10-year Treasury yield flirt with 0.8% for the first time in weeks. However, some analysts say they’ll get more interested if the 10-year yield reaches 1%, a level it hasn’t been above since the first days of this pandemic. If that happens, it could conceivably get some investors more interested in fixed income vs. stocks, but right now the stock market’s dividend yield remains well above anything government bonds—even long-term ones—can provide. The 10-year yield spent Friday still bumping its head on 0.78%. That said, the 30-year bond yield isn’t too far below the S&P 500 dividend yield, so that’s something to potentially keep an eye on. The yield rose just a smidgen early Monday to just below 0.78%, a familiar place lately.

Follow the Leader? For most of the summer, it felt like every time shares of Apple Inc. AAPL went up, the broader market followed suit. Come September, AAPL fell off a cliff, diving 20% from its highs. As AAPL cratered, the S&P 500 Index (SPX) suffered its first losing month since March and the Nasdaq 100 (NDX) slid into correction territory.

AAPL’s moves can’t necessarily be tied directly to the rest of the market’s, but it doesn’t seem like that big a stretch. It’s easily the highest-cap stock in the SPX with a valuation near $2 trillion, or nearly 7% of the value of all stocks in the index. It’s also become kind of a bellwether, according to some on Wall Street, and a stock many fund managers feel they have to own simply because their clients demand it.

That’s why it seems a bit odd that AAPL shares recently decoupled a bit from the SPX. Over the last month, the SPX is up nearly 2% while AAPL is down about the same amount. Not a huge gap, of course, but one that’s worth watching because it might tell us something about the market. Perhaps there’s something to be said about people rotating to value, with value stocks outpacing growth stocks in September for the first time in ages and cyclical sectors like Financials and Materials starting to pop a bit. Not to say this means AAPL and other FAANGs can’t get back on their horses. Only that it might be good news for bullish investors if the market finds it can move higher without leaning so much on the mega-caps.

Second Wind for Small-Caps? Industrials have also gained attention recently. This includes airlines, which, according to a Barron’s report, gained 6.7% during the first week of October. The SPX gained about 2.5% during that same time frame. The gain in Financials, Materials, and Industrials is likely helping boost small-cap stocks.

The Russell 2000 Index (RUT), the small-cap index, looked like it was getting left behind when the other broader indices such as SPX and the Nasdaq Composite (COMP) hit their all-time highs in early September. But RUT looks like it’s trying to play catch up as it heads toward its January high of 1715. It’s trading well above its 50-day moving average and is now moving toward its next resistance level of around 1700. The RUT closed at 1637 on Friday.

Photo by Morning Brew on Unsplash