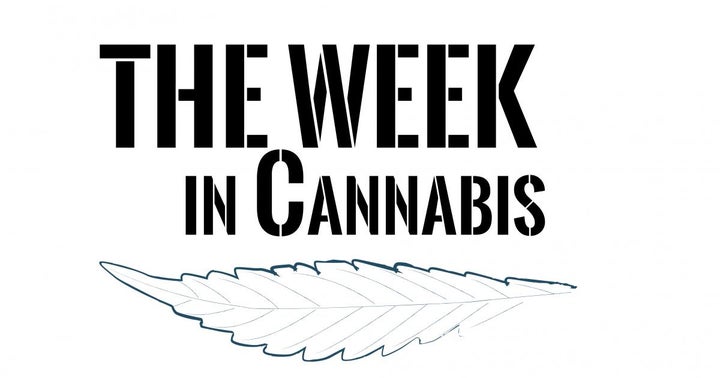 This week, cannabis stocks experienced quite a bit of volatility amid a slew of big news items.

On Monday, New Jersey Gov. Phil Murphy signed a trio of adult-use cannabis reform bills, making recreational marijuana legal and regulated for adults 21 years and older, while also decriminalizing the possession among all inhabitants of the state.

Over the last five trading days:

In addition, the AdvisorShare Pure US Cannabis ETF (NYSE:MSOS), which launched on Sept. 2, 2020 with $2.5 million in assets, confirmed Tuesday it has exceeded $1 billion in assets under management.

Former Eaze Technologies Inc. CEO Jim Patterson pleaded guilty to one count of conspiracy to commit bank fraud, according to Law360. A trial is set for March 1, with charges against businessmen Ruben Weigand and Hamid Akhavan in the Southern District of New York federal court. Eaze has not been charged.

Koach Capital launched a new $100 million fund, Benzinga learned exclusively. The Michigan-based sale-leaseback provider, focused on retail locations for the cannabis industry, will leverage the success of its first fund to continue to pursue transactions of this nature, building on the more than $40 million it has already invested via its first fund. In addition to launching Koach Capital Fund II, the firm appointed Grassroots Cannabis founder and CEO Mitch Kahn to be partner and chair of Koach’s Investment Committee.

Cronos Group Inc. (NASDAQ:CRON) (TSX:CRON) released Friday its fourth quarter and full-year 2020 financial results with a yearly net loss of $75 million, compared to a net income of $1.1 million in 2019.

The Battle Brothers Foundation obtained authorization from the national Independent Review Board for the study on the efficiency of medical cannabis in posttraumatic stress disorder (PTSD) in veterans, in partnership with NiaMedic.

"We lose 22 veterans a day due to post-traumatic stress and its effects," Bryan Buckley, founder of Battle Brothers Foundation, told Benzinga. "It's time that the research and medical community acknowledge the benefits cannabis can provide in alleviating some of these symptoms for veterans." The University of California, Irvine will serve as the participating center for the study.

LeafLink partnered up with Last Prisoner Project, a nonprofit organization dedicated to cannabis-related criminal justice reform, allowing the latter to tap into a platform that powers over $3.3B in annual orders, or 35% of U.S. wholesale cannabis commerce.

The give-back model is accessible directly in LeafLink’s marketplace and has the potential to stimulate the entire network of cannabis businesses that use the B2B platform to streamline wholesale ordering.

Smoking accessories maker Poke A Bowl entered into an agreement to sell its products through Walmart.

Actor and Poke A Bowl co-founder Creagen Dow told Benzinga, “As a company, we had to consider another avenue for consumers to purchase our product after receiving numerous requests asking if our product is available at Walmart. After our team reviewed Walmart and its access to our customer base, it was determined that it would add value to our existing distribution channel and add exposure to the product market, which will give us the edge we are looking for.”

The Blinc Group Inc. and Labstat International Inc. will be conducting a North American Cannabis Vape Consumption Survey, aimed at better understanding how consumers use vaping devices. Administered by Abacus Data, the survey will collect information from more than 2,000 medical and adult-use consumers across North America to understand how they use cannabis vape devices. The data collected will assist the Blinc Group and Labstat in developing a baseline “puffing regime” for cannabis vape testing to help craft standards for future vape policy. You can take the survey here.

The company also closed an initial funding round led by Inner Spirit Holdings Ltd. (CSE:ISH), Kiaro Holdings Corp. (TSXV:KO), Canadian radio host Alan Cross, and prolific investor Michael Wekerle, following an appearance on the Season 15 finale of CBC's Dragons’ Den. CEO Ian Kwechansky told Benzinga, “I am incredibly honored to be working with such a robust roster of talent to shine light on emerging homegrown talent. LOOP/POOL, as a brand, collective, and movement, is committed to giving back and ensuring that artists across all genres feel supported.”

Software company Fyllo hired former Twitter Inc. (NYSE:TWTR) executive Katie Ford as its new chief operating officer. Ford, who served as Twitter’s head of global brands, will leave her spot at Fyllo’s board of directors to undertake this new challenge.

"As someone who was arrested for cannabis at a young age, the work of SSDP made it possible for me to go to college and become the man I am today," Ortiz told Benzinga. "Activism changes lives, and changes our communities, and I'm honored to be able to share what I have learned with our next generation of community builders."