Despite strong opposition from former White House Press Secretary Sean Spicer and Attorney General Jeff Sessions, and the overall limitations imposed by federal illegality in the U.S., 2017 is shaping up to be a great year for the North American cannabis industry. As more institutional investors come into the space and the public gets more comfortable supporting marijuana companies, signs of maturity and consolidation continue to emerge.

Along this line, Viridian Capital Advisors’ latest release of its Viridian Cannabis Deal Tracker, a unique and valuable resource that tracks the capital markets activity in cannabis, showed that capital raises in the first three quarters of the year surpassed $1.8 billion, up from $720 million in the same period last year. Also notable is the surge in the average size of raises, which more than doubled from $3.0 million last year to $6.7 million this year.

Below is a look at some of the most interesting trends witnessed in 2017, including investment drivers, shifts in deal and investor types, and the mounting presence of U.S. assets in major Canadian stock exchanges.

There is certain continuity in the investment landscape. Equity raises keep outpacing debt raises, with the former accounting for more than 86 percent of the total dollars invested versus nearly 90 percent in the first three quarters of 2016. So far, we’ve seen about $1.56 billion allocated to private and public equity, and $247.5 million to debt. This compares to $647.7 million and $72.4 million in 2016.

Another constant is the percentage of dollars going to public and private companies, with publicly traded firms getting just over 73 percent of the money, same as last year.

Beyond these figures, a lot has changed. “The first half of 2016 was pretty slow, while the first half of 2017 saw markets heat up considerably,” Viridian Capital Advisors’ vice president Harrison Phillips told Benzinga, mentioning that $230.1 million came into the industry in the first six months of 2016, versus more than $1.30 billion for the same time frame this year.

On the other hand, the third quarter saw increased activity surrounding the 2016 elections, so numbers were more at par with this year’s. Q3 2016 saw almost $490 million invested in the marijuana industry, while Q3 2017 saw approximately $511 million injected into businesses.

Another interesting change is that in sector allocation. Last year, biotech and pharma industries were clear favorites, trailed from pretty far behind by cultivation and retail. In contrast, this year, the latter category has been the undisputed darling so far. 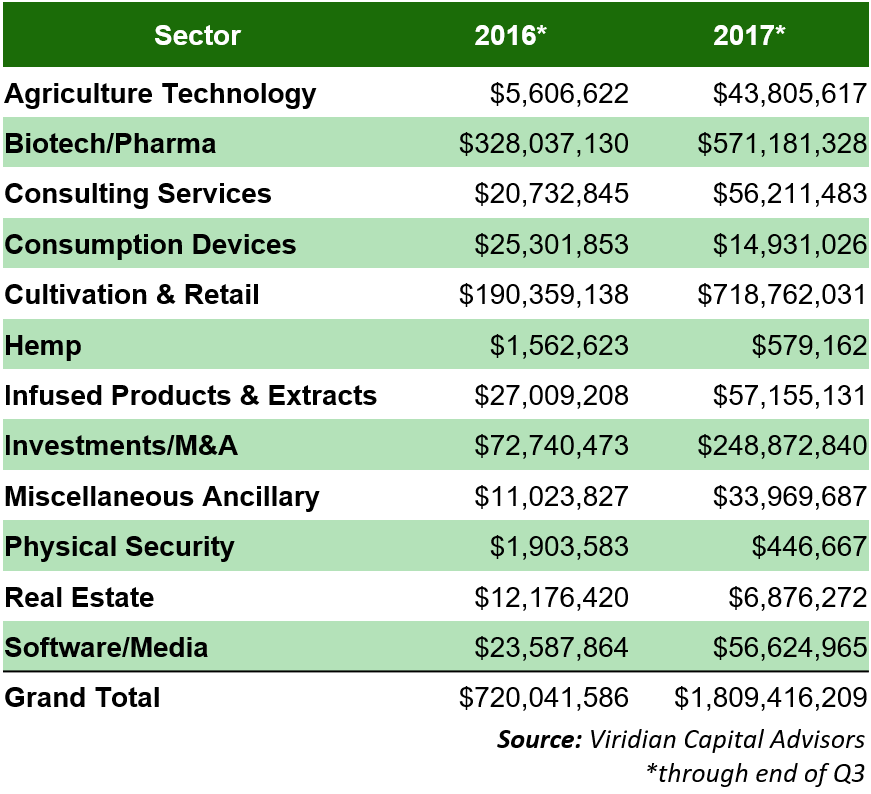 As mentioned above, the average size of raises has more than doubled over what’s past of 2017. We have, in fact, been witnessing numerous raises in the tens of millions. Here’s a look at the five largest transactions in the first three quarters of 2017, and how they compare to the top five deals from the same period in 2016.

Check out additional details on these raises in the table below:

Unlike the U.S., Canada has a federally legal cannabis program. Compliant companies up north do not face the risk of federal prosecution just for being involved in the industry. However, there's been a trend of publicly traded Canadian companies acquiring U.S. marijuana assets.

“This presents a possible existential threat, but there has been no material impact on markets thus far. The TMX Group that owns the TSX and TSXV has not yet come out with a definitive response, but they have expressed concerns around the legality of listing Canadian firms with ownership of U.S. cannabis assets,” Phillips explained.

In the meantime, several Canadian cannabis companies on the TSX and TSXV are approaching year-to-date highs.

But, while some of these Canadian businesses have established outright ownership of U.S.-based cannabis assets, others have gone for management contracts in an attempt to avoid any potential trouble. “The CSE has come out saying they will accommodate companies that own US cannabis assets,” Phillips added, pointing out that at least one firm had “downlisted” from the TSXV to the CSE to take advantage of this.

Beyond the issue of cross-border ownership, Canadian marijuana stocks have been delivering strong results and gaining popularity really fast. This is especially true for licensed producers, Phillips pointed out. But, what’s driving these high levels of acceptance?

“For one, the cannabis market in the Canada is federally legal and regulated. Currently, Canada has a medical market that has been growing strongly under the Trudeau administration, sparking interest in the cannabis industry,” Phillips said. “Additionally, Trudeau’s administration has pledged to launch a nationally-regulated adult-use cannabis market in Canada in July 2018. Further interest in Canadian cannabis-related companies has been driven by the growth prospects of the industry following the launch of this market.

“Furthermore, the federal legality of the industry in Canada allows for much greater access to the capital markets for raising capital and listing on stock exchanges. Many of the largest capital raises in the industry have been completed by these LPs, and these cash positions have allowed many of the Canadian companies to better capitalize on this industry. LPs have been dramatically expanding their capacity in preparation for the coming adult-use market, and many have also been deploying the capital through strategic investments and acquisitions, both domestic and international.”