Just a few minutes ago, Warren Buffett’s Berkshire Hathaway filed its Form 13F for the second quarter of the year, disclosing its long equity positions as of June 30, 2015. Below is a look into the firm’s portfolio and some of its most interesting moves and positions.

As is the norm, Berkshire’s equity portfolio did not undergo many changes during the quarter. Only one new stock was added, and two positions quit. In addition, the fund boosted its exposure in two stocks, and trimmed its stake in another two. Consequently, the market value of the portfolio remained almost unchanged, at $107.18 billion – up from $107.13 billion in the first quarter.

In terms of allocation, financial stocks continued to dominate the portfolio, taking 46 percent of the assets, followed by consumer staples (23 percent) and information technology (14 percent).

The top 12 positions in Mr. Buffett’s portfolio remained unchanged in rank, with the largest bet being placed on Wells Fargo & Co (NYSE: WFC). The stake, comprising 470,292,359 shares, remained untouched over the period, meaning the fund continues to be the largest institutional investor in the company. Berkshire was trailed by the Vanguard Group, which kept the second place despite a three percent reduction in its stake to 267,398,525 shares. Berkshire now owns about nine percent of the financial and bank holding company’s outstanding stock, while the Vanguard Group holds 5.15 percent of the total shares outstanding.

The other stocks completing Buffett’s top five picks are:

These stakes make Berkshire the largest institutional shareholder in all of the above-mentioned companies, except for Wal-Mart, where the Vanguard Group owns 102,048,665 shares.

The only new position initiated over the quarter was Axalta Coating Systems Ltd (NYSE: AXTA). The stake comprises 20,000,000 shares, worth more than $660 million, representing about 8.7 percent of the total shares outstanding.

This wage makes Berkshire the second largest institutional investor in the coatings systems company, only surpassed by the Carlyle Group, which declared holding 104,311,996 shares. Among hedge funds, Robert Joseph Caruso’s Select Equity Group was the biggest shareholder –after Berkshire, with 5,383,924 shares of the company.

The positions closed during the quarter were relatively small in size. Between April and June, Buffett sold all of its 1,978,895 National-Oilwell Varco, Inc. (NYSE: NOV) shares, and all of its 7,499,450 Phillips 66 (NYSE: PSX) shares.

Believe It: A Bullish Call On A Bank ETF 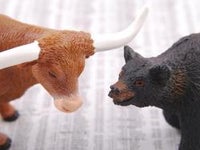