Peter Schiff Says Fed Is Doubling Down On Bad Policy: 'It's Obvious That We're Heading To Recession' 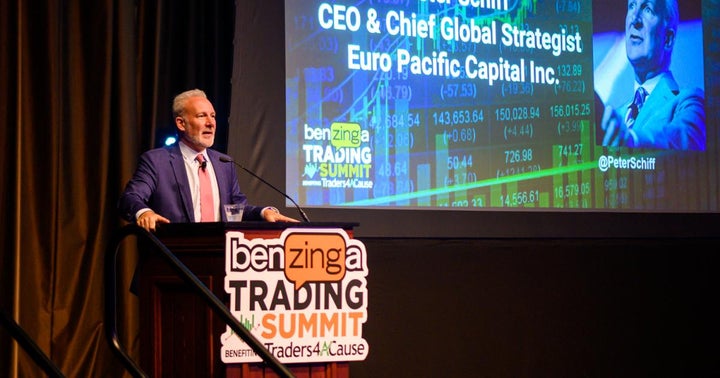 Peter Schiff, the CEO and and chief global strategist at Euro Pacific Capital, pulled no punches at the Benzinga Trading Summit on Thursday in New York City.

To understand today's financial climate, it's best to examine the dot-com crisis of the 1990s, he said.

"That excess liquidity fueled a stock market bubble which popped in 2000, 2001. But instead of learning its lesson and not repeating its mistakes, the Fed did what governments often do, and it just doubled down on his failed policies," said Schiff.

"Those consequences were the 2008 financial crisis. The Fed caused that. That great recession that we had was because we kept interest rates lower for longer, and during that time we made many more mistakes that needed to be corrected."

The Fed's mistakes worsened over time, according to Schiff.

"Only this time they didn't take rates down to 1%. They took them all the way to zero and they left them there for like six, seven years. And after three years or so of trying to normalize rates, they stopped it at 2.25 to 2.5% and now we're going back to zero," he said.

President Donald Trump's role has been to make a bubble bigger.

"We have bigger budget deficits now than we've ever had before," Schiff said. "In fact, we're running larger deficits today when the economy is supposedly still growing than we did during the worst part of the Great Recession. We have the worst trade deficits in U.S. history today."

The combination of enormous trade and budget deficits are evidence that the U.S. does not have a strong economy, he said.

"If you look at all the economic data, it's obvious that we're heading to recession."

The Federal Reserve denied the country was heading into a recession in 2008, Schiff told the Trading Summit — he expects the central bank will "pretend everything is great" when interest rates are once again reduced.

“But this is not a one-time thing. This next cut — this is simply the first step on the road back to zero, and it's not just a return to zero, it's going to be a return to quantitative easing.”

Peter Schiff: Bitcoin Is 'The Biggest Bubble I Have Ever Seen'

Each day, Benzinga takes a look back at a notable market-related moment that occurred on this date. What Happened? On this day in 1637, the infamous tulip bulb bubble reached its peak. Where Was The Market? The S&P 500 and the Dow Jones Industrial Average were nowhere to be found, and neither was the United States of America. read more