My eyes filled with tears as I read the news about Brett Roper, CEO of Medicine Man Technologies Inc (OTC:MDCL), passing away. It’s been a couple of days and I am still in shock.

With nothing left to do but grieve, I felt the need to pay this man — a pioneer in the cannabis industry — some due tribute.

He Was Always Available

I started with Alan Brochstein, author of the 420 Investor and founder of New Cannabis Ventures.

"I have known Brett for several years and admired him for always asking the right questions," he said. "He also made himself widely available to the media, those in the industry, potential entrants into the industry and investors to discuss cultivation and its economics."

He Took No Shortcuts

“I really admire him for taking no short-cuts at Medicine Man Technologies and developing the business from one focused on just new application consulting to a much more diversified organization," Brochstein said. "I am very sorry that he won't be able to see how micro-cultivation plays out in Canada, as this really excited him and was where he had planned to focus his efforts going forward."

He Was A Teacher At Heart

The other indispensable comment was that of Andy Williams, his partner, friend and co-founder of Medicine Man Technologies.

“Brett was my friend and partner," he told Beniznga. "I have known him for nine years. We co-founded Medicine Man Technologies together in 2014. Brett will always be a cornerstone of our company, and it has been an honor and pleasure to be his friend and partner for as long as I have been."

Among the many words Williams said come to mind when thinking of Brett: intelligent, leader, honest, generous, expert. The one that stands out, though, is teacher.

"Brett loved to teach," Williams said. "He gave his time freely to anyone who asked of it; he was insatiable in his learning about so many subjects in his life, as he was about the cannabis industry. I very much believe Brett became an expert in many topics, not just for his love of learning, but so he could help others learn about those things through his teaching. He was a leading expert in the cannabis industry and real estate; he was a skilled pianist; and, I learned at his memorial, he was once an accomplished gymnastics instructor for kids.”

“Brett was one of the cannabis industry's rarefied individuals who was able to bring Wall Street to Weed Street. He embraced the industry's core components: ethics, compassion, passion, and collaboration, and moved our industry forward,” Arias said.

“Always giving of his time and knowledge (from speaking to the retiree looking to invest into the industry and keeping them grounded and realistic about the pros and cons, to other industry leaders and how we can all move and grow this industry responsibly together). Brett will be missed, but he has left his mark and I am thankful for his legacy,” Arias added.

Benzinga's Cannabis Capital Conference is the premier gathering of cannabis entrepreneurs and investors in North America. Click here to learn more about the event, which takes place Jan. 15-16 in Miami, Florida. 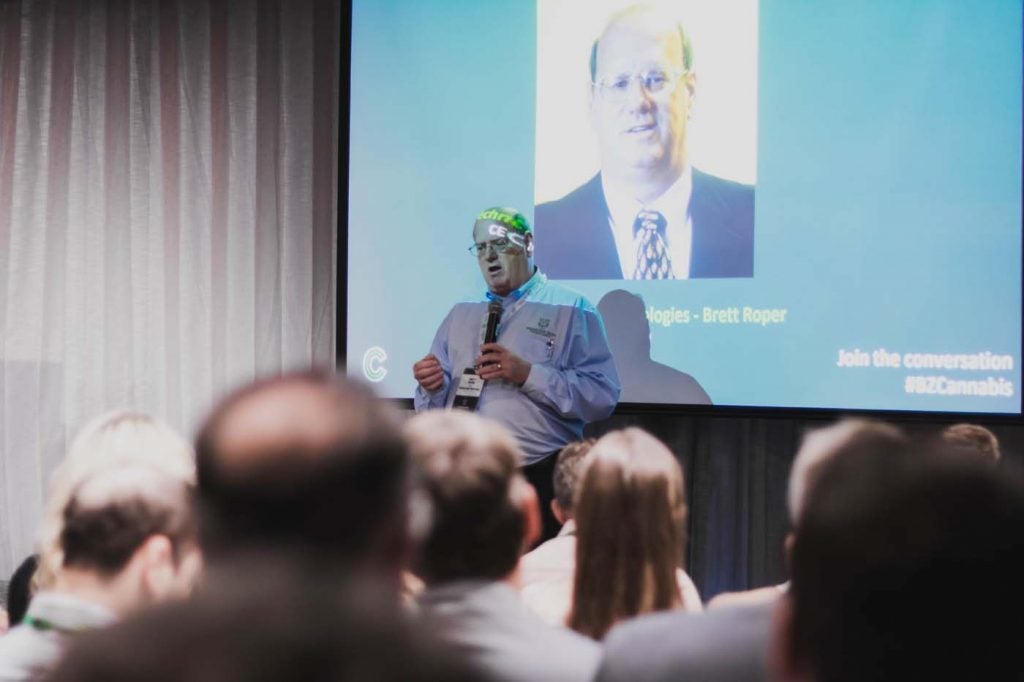 Brett Roper speaking in August 2018 at the Benzinga Cannabis Capital Conference in Toronto.

He Made Ideas Happen

Garyn Angel, CEO and founder at MagicalButter.com, was yet another fan.

“Brett made ideas happen. In an industry full of hyperbole, Brett delivered on a vision with consistency. RIP my friend, you are a legend.”

He Was A Pioneer

I spoke with Phil Carlson and Lewis Goldberg, of KCSA Strategic Communications, who said “Brett was a pioneer and one of the more respected names in the cannabis industry."

He Was Honorable, Kind And Sincere

“We met him at a conference in NYC about three years ago and knew out of the gate we had to work with this guy,” Carlson and Goldberg said. “He was honorable, kind, sincere and certainly knowledgeable. We would reach out to him often for advice. He will always be known as one the leaders in the space who helped shape this growing industry.”

He Was A Mentor To Many

Greg Gamet, former founding partner of Denver Consulting Group and Chief Cannabis Officer of Gold Flora said Brett was a lot of things to a lot of people.

“To me he was at first a mentor on the possibilities of taking companies public," Gamet said. "Next he was a friendly competitor because we both were founding executives at competing consulting companies, then he was a fierce negotiator on the purchase of said consulting company, and finally…. a friend. Over the last several years, I could call and bounce ideas off of and just shoot the breeze… I always appreciated him dumbing down the conversation with me so I could keep up with him- very smart guy.”

He Was A Champion For Cannabis Advocacy

"Brett was a great man in this industry and a kind person to work with. We always had thoughtful open talks about the market and where it's going and I always knew he was excited to help push the community further,” said Drew White, of NisonCo PR. “We’d do PR in CA, CO, and other large cannabis states, but Brett was always persistent in making sure all the small states were touched to ensure that people in any state with cannabis legislation could have their fair chance at getting into the industry. Brett truly was a champion for cannabis advocacy.”

He Was An Amazing Man

Andy Williams concluded, “Brett was an amazing man. I thank him for his leadership in helping to build the foundations of this new industry and I am grateful to have been part of his life.”