Two words summarize last week’s most relevant event for the cannabis industry: John Boehner. The former House speaker announced his views on cannabis had evolved and, in support of legalization, he was joining the board of directors of New York-based marijuana company Acreage Holdings.

To make things better, President Donald Trump struck a deal with Sen. Cory Gardner (R-CO). The Senator will end his blockade of Justice Department nominees; In exchange, Trump promised the federal government would not interfere with states’ rights to decide on their cannabis laws.

“In more than five years of covering the sector, I have never seen a more important week than this one for the U.S. cannabis industry. While the markets were swift to react to the news that the federal government may implement a permanent solution that allows states to regulate cannabis production and consumption, this is likely to have a profound impact on the ability of both private and public companies to access capital. The fact that the cannabis industry has been built on a foundation of quicksand subject to the whims of the federal government has been an almost insurmountable challenge,” 420 Investor Alan Brochstein told Benzinga.

“The Canadian LPs appear to have put in a low, with the Canadian Cannabis LP Index posting a clear double-bottom on Tuesday,” he said. “With that said, investors need to appreciate that the sector isn't likely to move in tandem. In fact this has been the case for the past few months. The diversity of returns so far in April illustrates this as well.” 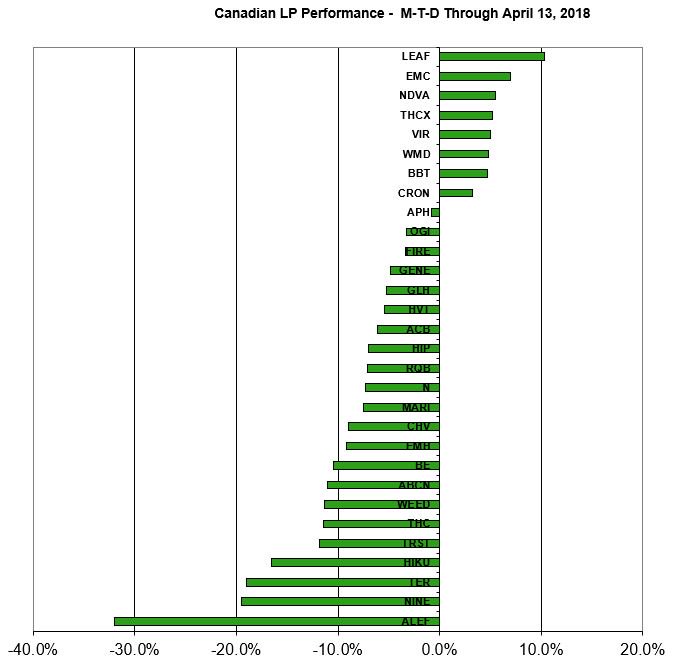 Here are some of the top marijuana stocks in U.S. exchanges and how the performed last week:

“With the cannabis industry growing at a rapid pace, we’re looking to support that expansion by scaling with our customer. Wurk has increased its client portfolio to include companies from 27 states across the US, making us the largest tax processor in the legal cannabis space. Our system must be able to accommodate this growth nationally while incorporating local laws and regulations applicable to each state,” Keegan Peterson, CEO and founder of Wurk told Benzinga.

“When we set out to provide the same kind of professional, retail-standard solutions available in other industries, HP’s ElitePOS was far and above the obvious choice, and we anticipate effortless expansion to new markets as a result,” Kyle Sherman, founder and CEO of Flowhub told Benzinga. “The powerful reliability and innovations HP offers will be a radical change from the hobbyist software solutions that cause such a headache for cannabis companies, which are desperately seeking real results from their compliance and operation systems.”

The Peak Beyond came out as the winner of the CNvest: Terps and Tech pitch contest. The company, which makes interactive smart displays for cannabis retail spaces, walked away with a $10,000 cash prize and 90 minutes of free consultancy with Salveo Capital. Check out their product in the video below.

Cura Cannabis Solutions, one of the largest marijuana companies in the world, announced its entry intro the Canadian market by starting the application process in pursuit of its own Access to Cannabis for Medical Purposes Regulations (ACMPR) license as well as its Dealers License (DL). These licenses would allow the company to not only operate in Canada, but also to its products to Western Europe and other countries.

GreenSpace Labs announced it will be executing a distribution agreement with Sage Analytics. Sage will become the exclusive channel partner for the portable GreenLite Screener, which scans cannabis products for pesticides and toxic metals, in the State of California.

Back in January, Benzinga reported on the decline in the sales of medical marijuana in Colorado. The state recently posted its March figures, and the deterioration continues.

As highlighted by Matt Karnes, founder and managing partner at GreenWave Advisors, sales reached $25 million in March, down 34 percent year-over-year, and 7 percent month-over-month. The first quarter of the year saw a 16 percent fall in medical marijuana sales, to $83.6 million. This number also represents a 12 percent decline in relation to the fourth quarter of 2017.

On the other hand, first quarter recreational cannabis sales surged by 15 percent year-over-year to $274 million, but declined slightly when compared to the $277 million in sales in the last quarter of 2017.

“We believe the overall decline in medical sales is largely attributed to a continued downward trend in pricing coupled with the deterioration in cardholder counts,” Karnes told Benzinga. “Our industry theses (outlined 4 years ago) remains intact: a recreational market will disrupt medical sales.

“We think these weakening fundamentals will cause the state to rethink its current regulatory structure (in the interest of realizing cost synergies) and we expect a continued consolidation of medical (as it exists today) and recreational use markets in states that have fully legalized marijuana."

Consumer Research Around Cannabis released its “Chicago Cannabis Marketplace Report,” featuring interesting facts about consumers in the third largest cannabis market in the U.S., the  Chicago Greater Metropolitan Area. The survey revealed that 63.8 percent of adults aged 21 or older approve of medicinal and/or recreational cannabis. 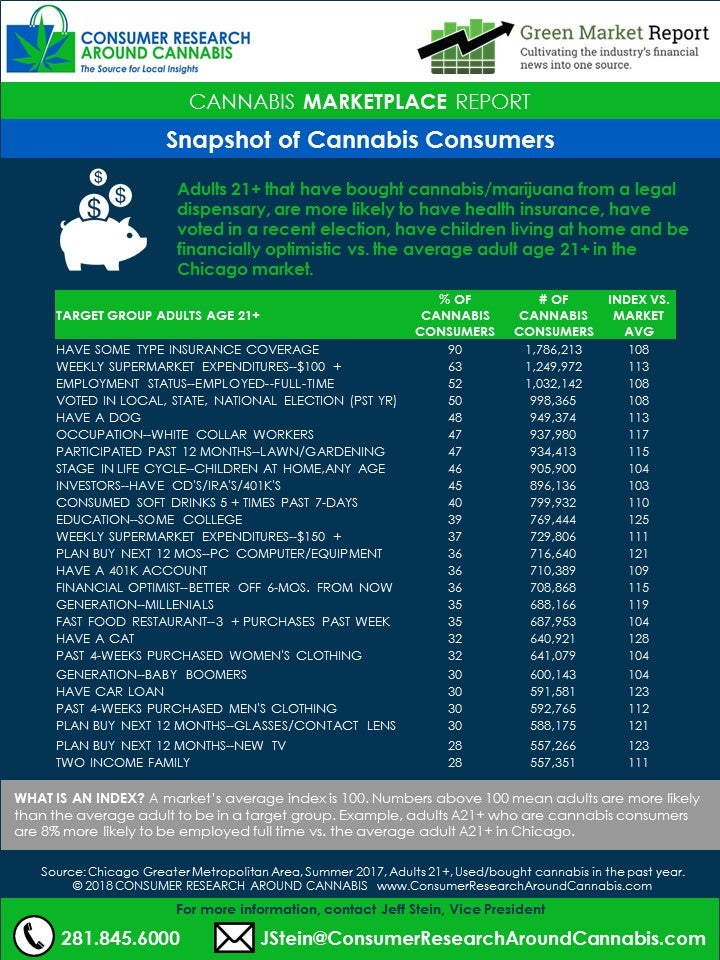 As of July 1, all licensed cannabis retailers in California will be obliged to sell strictly lab-tested products. However, cannabis industry participants have noticed that the state might be approaching a bottleneck, which will threaten California’s already-fragile cannabis supply chain, as only 26 temporary licenses have been issued for testing labs in the state.

“From our experience in Oregon, increased demand for testing services results in product shortage and potential bottleneck. EVIO’s growth is meant to work in tandem with the need for more testing labs, which is an absolute necessity for California’s market. Our labs operate coast-to-coast and ensure standardized safety requirements across the board,” said Lori Glauser, co-founder and COO of EVIO Inc EVIO, owner of EVIO Labs.

May 9–11: Marijuana Business Daily is organizing MJBizConNEXT in New Orleans.