Beyond The Marijuana Index: MJIC CEO Talks Company's Desire To Be 'Amazon Of Weed'

MJIC Inc., the company behind the much-discussed Marijuana Index*, tracks U.S. and Canada-traded weed stocks and has been used as the base for the main cannabis ETFs out there. However, the media seems to have emphasized only one of the company’s multiple business segments.

MJIC started as an investment business, a venture capital firm focused on the cannabis space. Nonetheless, the past couple of years have witnessed a migration toward what Karban has defined as a “full-blown operating business that fits squarely inside of the industry to help professionalize it.”

The legal marijuana industry nowadays is mostly a compliance business. Unsurprisingly, this has been one of MJIC’s priorities as well. “In making the decision to transition from being an investor to being an operator, one of the things that we decided (as a matter of policy and principle) was we would just absolutely not compromise our compliance,” the CEO told Benzinga. And, MJIC does not apply that standard to how it operates its own business but also sets it as a prerequisite for anyone that wants to transact with the company.

When Karban took over as CEO at MJIC, he had a vision for the company: It would become the Amazon.com, Inc. (NASDAQ:AMZN) of cannabis. What he projected was a first-of-its-kind omnichannel approach to the industry that ultimately creates, not just a commercial platform, but also a community — “an identity destination that is more than just a pragmatic instrument for daily life.”

“What we are building toward is an infrastructure, a strategy, a platform and a community that essentially will look a lot like the Amazon of legal cannabis, starting in the state of California and then coloring in the map state by state,” he said.

In other words, the company is looking to be able to service and support every vertical in the supply chain, from B2B wholesale to on-demand consumer deliveries — always with a laser-focus on compliance.

“We want to offer a truly comprehensive, value-added package that goes beyond just logistics and moving stuff around in trucks up and down the state.”

While MJIC seems to be taking many steps in the right direction, becoming “the Amazon of weed” is certainly an ambitious goal.

Many of the pieces are already in place; only some infrastructural details remain to be filled, the CEO said. “We started this with an analytical review of what we already own in our portfolio, the services business that we had built out in the transition period between being an investment company and an operating company,” he said. So, the first question was, which of the assets already owned by MJIC supported the infrastructure they were looking to build?

The first differentiator the management team identified was the media business, which allowed them to “help support and promote client products and services as their distributor.”

The other legacy asset MJIC held, which execs believed would help support an aggressive expansion into distribution, was the compliance business. “That services offering has both a commercial and regulatory value proposition,” Karban said. “It’s commercial because we are constantly on top of what is happening at all 482 municipalities in California, so we have an informational advantage in terms of where licensing is heading. But, most importantly, from a regulatory perspective … We understood the importance of compliance.”

Filling In The Blanks

Once the core assets had been pinpointed, MJIC started looking into how to fill out an infrastructure that could support the transformation of its virtual platform into a physical one — from a logistics, fulfillment and delivery perspective.

First came Rolling Paper Depot: a proprietary, national e-commerce platform focused on unregulated products like lighters and rolling papers. After that, it was Hippie Butler, a personalized subscription business with similar products. With these two businesses, the e-commerce and subscription boxes were checked.

“If you look at all of those channels kind of aggregated into one platform, there is a centralized community around it and an access point to it that we are building on a proprietary technological basis,” Karban noted. “That gives you the reach into everything, every channel. It’s complete and end-to-end, from cultivation all the way to consumer.”

“So, we are bringing that functionality, the ability to lawfully move products in whatever form it is, from whatever place it needs to go in California, across any vertical, and across any channel, supported by media, compliance, and financial services. That’s the package that we’re offering to people and that we have in place today.”

Although MJIC wants to become a full-service company, its core business focus is placed on distribution. “Of all the different verticals that compromise the supply chain, distribution is ultimately going to be the organizing force of the industry because all of the others are kind of siloed in what they do,” Karban explained. “Distribution is a strategic place here because that is ultimately the force that organizes it, connects all of those different stakeholders.” 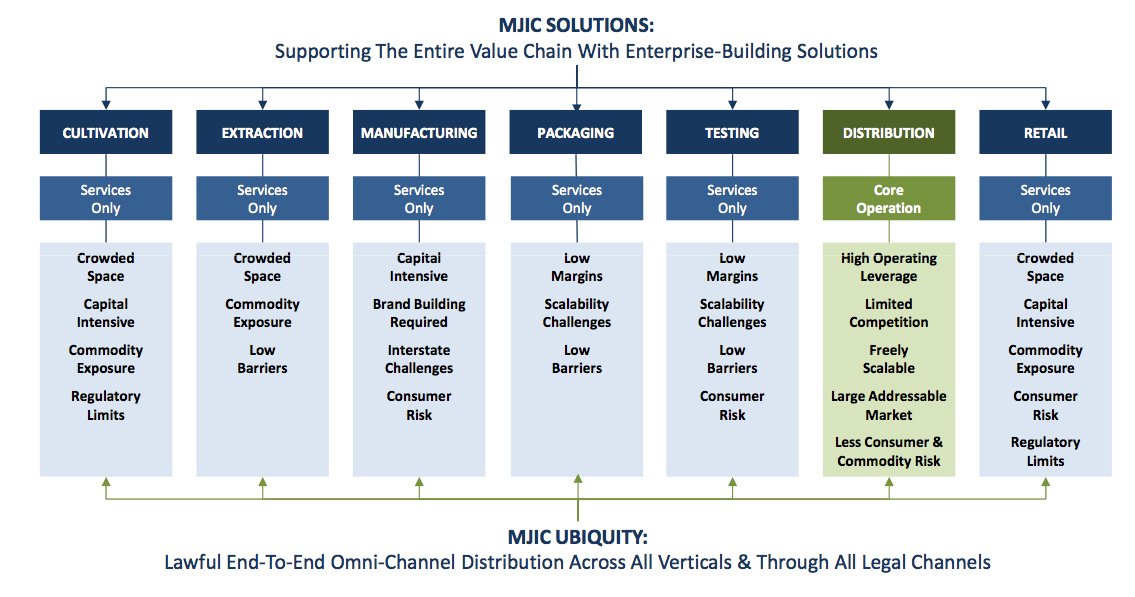 This is where the company aspires to be like Amazon: In wants to insert itself into the lives of its customers, both on the business side and on the consumer side, making itself both instrumental and indispensable to them.

* Some of the major companies included in the North America Marijuana Index are:

Marijuana Venture Capitalist On CanopyBoulder's Investments: We Focus On Co's That Can Scale To Spectacular Levels Very Quickly