After spending considerable time as a drag on the once high-flying consumer discretionary sector, casino and gaming stocks are rebounding this year thanks to signs of stability in Macau, the world's largest gambling center.

The combination of stability in Macau, a Chinese territory, and steadiness in Las Vegas has contributed to a year-to-date gain of nearly 6 percent for the Market Vectors Gaming (ETF) (NYSE: BJK). BJK's performance should be viewed as especially solid when considering softness in other U.S. gaming markets excluding Las Vegas.

“Recovery in U.S. regional gaming revenues continues to be tepid. Longer-term secular headwinds such as slower wage growth, less certain retirement prospects for baby boomers, and alternative avenues for gambling will continue to weigh on the sector, despite tailwinds like more affordable gas and improved economic conditions in 2015. In addition, REIT spinoffs remain risky for regional gaming operators,” said Fitch Ratings in a new note.

U.S. stocks account for 34 percent of BJK's weight. Due to market cap erosion experienced by some Macau names, China is now longer the ETF's second-largest geographic weight. Australia holds that spot at 14.5 percent followed by China at 11 percent.

Overall, BJK features exposure to 15 countries with the United States, Australia and China being the only ones commanding double-digit weights. Five of BJK's country weights are emerging markets.

“Softness in the VIP market and further depreciation of the yuan may challenge Macau's year-over-year comparisons but we do not expect the broader economic slowdown in China to have a material impact on visitation,” said Fitch Senior Director Alex Bumazhny in the note.

Last month, Deutsche Bank upgraded shares of Wynn Resorts, Limited (NASDAQ: WYNN) to a buy rating “while raising the price target from $82 to $94. The analyst expressed optimism regarding the company’s long-term prospects.” 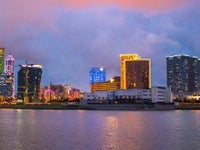 3 ETFs To Watch This Week: China, Casinos And More

Macau Can Spark The Casino ETF