This ETF Is Begging Yellen To Raise Interest Rates

Fed funds futures indicate that a dearth of a traders expect the Federal Reserve to raise interest rates this month. Same goes for December and the reality is, traders are not exactly tripping over themselves to make bets the central bank boosts borrowing costs early next year, either.

Despite its rookie status, USSD merits consideration, particularly by investors betting the dollar's ascent is merely in the middle innings and that the Fed will raise rates this year and next year. If those scenarios become reality, equity portfolios with significant exposure to large- and mega-cap companies that generate substantial portions of their revenue overseas could be vulnerable.

“In a rising U.S. dollar scenario, multinational companies that have more global sales exposure would not only lose on translating sales and profits earned overseas back into dollars, but secularly they’d become less competitive in the global markets, as their goods and services become more expensive to international consumers,” said WisdomTree Research Director Jeremy Schwartz in a recent note.

“The trend in factor-based or so-called “smart beta” investment strategies has focused on common factors such as value, quality, momentum and low volatility. WisdomTree believes currency can also be a critical factor explaining various market returns, even within the U.S. markets. While the real time results are relatively new—as just about four months of performance exist with these indexes being live—we are witnessing a wide divergence in the returns between the strong and weak dollar strategies,” adds Schwartz.

For those that believe the Fed raising rates will illicit a rally in the financial services sector, USSD becomes an even more compelling idea because the ETF allocates 24.6 percent of its weight to that sector, making financials USSD's largest sector allocation by 400 basis points. Three of the ETF's top 20 holdings are financial services names. 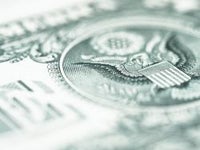 Making Some Green With Dollar ETFs