Walmart Inc WMT and Home Depot Inc HD earnings both looked really impressive, and WMT shares gained some ground in pre-market trading ahead of the opening bell. HD shares fell, however, and major stock indices were in the red early on. This could reflect buying interest drying up a bit following record closes for the major indices yesterday, though it doesn’t necessarily change the overall positive tone. Pandemic-related anxiety also could be a factor in the weakness this morning.

WMT continues to thrive in the stay-at-home economy, and nothing tells the story better than its 79% jump in Q3 online sales. They’ve really become a full-fledged e-commerce competitor over the last few years, and all their work to do that paid off once the pandemic hit. Other numbers also looked good, with WMT beating Wall Street’s projected revenue and earnings pretty easily. Revenue rose 5.2% from a year ago and same-store sales climbed more than 6%, both very impressive considering the recession and virus-related shutdowns.

However, growth was a bit slower than the previous quarter, which makes sense when you consider that in Q2 WMT was often the only game in town due to its huge online business and many competitors being shut down or limited due to the pandemic. In Q3, WMT had more competition.

Despite all that, shares barely gained in pre-market trading, maybe a reflection of the fact that WMT shares have already climbed more than 50% from the March pandemic-related low. In a way, you could argue the strong quarter was built into the stock price.

The same might be true for HD, which also beat Wall Street’s earnings and revenue projections but saw shares slip in the pre-market hours. One possible explanation for the weak stock price action could be HD’s plans to spend more on employee wages. Another might be ideas that the company can’t sustain the current pandemic-related momentum where so many people are focused on home renovation projects because they’re spending more time around the house.

In other corporate-related news, Tesla Inc TSLA will join the S&P 500 Index (SPX) on Dec. 21, a milestone the company’s investors have been eagerly anticipating. Shares jumped 13% in pre-market trading. It may sound symbolic, but joining a major index can actually be pretty good news for a stock because many fund managers will now need to add shares to their portfolios if they’re trying to match S&P 500 performance.

Things weren’t so good on the retail sales front back home in October. They rose only 0.3%, the government said Tuesday, lower than the 0.5% average Wall Street estimate. Stocks fell further in pre-market trading when investors saw that number.

Shares of Walgreens Boots Alliance Inc WBA and CVS Health Corp CVS both got pounded in pre-market trading after Amazon.com, Inc. AMZN announced it would enter the pharmacy business. When you think about it, this AMZN announcement might be one thing keeping WMT shares from making a big move higher on earnings.

While stocks are lower this morning, it’s amazing this wall of worry stocks have climbed to new record highs. All through the rally, you continue to hear talk of why the market should be under pressure, but buyers continue snapping up shares.

Another First, This Time For The $DJI

Another week, another record close for the major indices. That’s how Monday ended after the latest vaccine news, and this time the record makers included the Dow Jones Industrial Average ($DJI) as well as the S&P 500 Index (SPX). For the $DJI, it was the first record close since February, and that’s actually pretty significant when you think about it.

Why? Because the $DJI, unlike the SPX or the Nasdaq (COMP), isn’t so dominated by Tech and mega-cap Communication Services stocks like Amazon.com, Inc. AMZN and Facebook, Inc. FB. Also, Apple Inc AAPL swings less weight in the $DJI than it used to because of its recent split. Instead, the $DJI has major exposure to the big Financial, Energy, and Industrial companies like Boeing Co BA, Chevron Corporation CVX, Goldman Sachs Group Inc GS, JP Morgan Chase & Co. JPM, Caterpillar Inc. CAT, and 3M Co MMM. A lot of these “old line” behemoths had huge days Monday on reopening hopes, including BA and CVX.

Energy, which led all S&P sectors last week, started the new week with another scoreboard topper as it rose an amazing 6.6%. Compare that to Info Tech, once the darling of the “stay at home” set, which rose less than 1% Monday. That’s a pretty good example of current sentiment, which seems to favor the reopening trade over those big Tech firms. It’s not like FAANGs are having a bad time, they’ve just been a bit subdued lately.=

Risk-on was the mood Friday and Monday. Not so much this morning. Bonds are up, gold is up, and volatility is up. When you see those headlines, it often isn’t good news for stocks.

Consider keeping a close eye on fixed income. The 10-year yield clawed its way back above 0.9% Monday, but didn’t gain as much energy from the vaccine news as some might have thought it would. This could reflect continued caution and less enthusiasm about a possible stimulus before the end of the year. The sad headlines about rising virus cases could also be putting a ceiling on yields, and if bonds are getting a bid, that possibly means less money moving into stocks.

Though Tech was a laggard Monday, it’s worth noting that semiconductor stocks had a nice session. They appeared to draw support from reports that Taiwan Semi is expanding production capacity to meet high demand from chip companies, according to research firm Briefing.com. The Philadelphia Semiconductor Index (SOX) gained 2.5%. It’s interesting to see that the SOX has risen nearly 8% over the last month even as the S&P Technology (IXT) sector has fallen 1.2%.

The Cboe Volatility Index (VIX) fell below 23 on Monday, an important technical support level and near the August lows below 22. However, it was up at one point despite the SPX rally, an odd situation that deserves a close look if it happens again. If you see VIX rising in a session when stocks are also up, it might be a bearish signal for stocks. We’ve seen a stronger VIX hoist a red flag several times over the last year,  though past performance isn’t necessarily a future roadmap. VIX futures ticked up slightly early Tuesday but stayed below 25, so nothing too worrisome.

Good News Out Of Asia

One thing we didn’t mention here yesterday amid the vaccine euphoria but which also deserves some attention is really nice economic data from Asia. Chinese investment and consumer spending grew at faster year-over-year rates in October than the month before, while industrial production stayed solid.

Retail sales, which investors might want to watch closely for clues about Chinese consumer sentiment, rose 4.3% in October from a year ago, up from 3.3% in September but a bit lower than analysts had expected. Meanwhile strong Japanese growth data added to confidence the economy is recovering there. Japan’s economy grew at a 21% annual pace in the last quarter, the first quarter of growth in nearly a year.

While China seems to be much further out of the woods on COVID-19 than we are across the Pacific, it’s encouraging to see how quickly its economy was able to recover. Maybe that suggests something similar here once those vaccines start to become available, hopefully over the coming months. At least that’s what investors seem to be banking on lately. 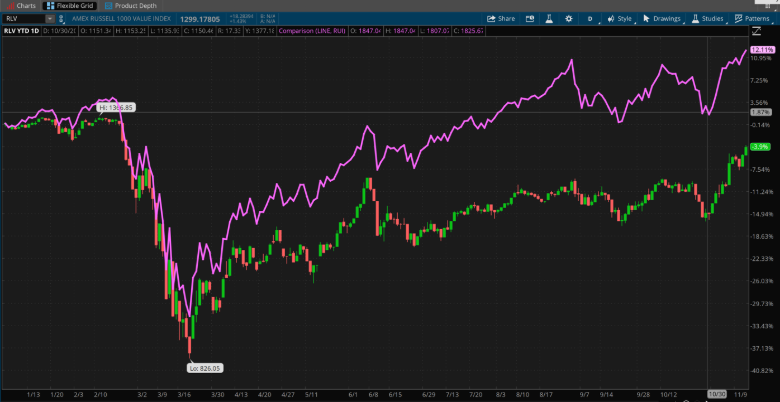 CHART OF THE DAY: EVERY DOG HAS HIS DAY. Value stocks have been kicked around for a long time, but now they’re starting to emerge from the shadows a bit. This year-to-date chart of the Russell 1000 Value Index (RLV—candlestick) vs. the Russell 1000 Growth Index (RUI—purple line) shows the growth index still...well, growing, but value is also enjoying some decent interest over the last two or three weeks. We’ll see if that continues. Data sources: FTSE Russell. Chart source: The thinkorswim® platform from TD Ameritrade. For illustrative purposes only. Past performance does not guarantee future results.

State of Employment: Some economists think more U.S. employment woes could be ahead. Why? Fiscal struggles for state governments in the wake of the recession that could trigger more layoffs, economists told the Washington Post. One reason the 2008 recession took so long to recover from, they said, is soft tax revenue during the downturn that upended state budgets and caused states to slash payrolls. There’s recently been another dramatic fall in tax revenue, and lack of federal support as stimulus talks drag only makes the plight worse for many states.

Current public sector weakness, economists warned, could mean it takes longer for the economy to dig out of the COVID-19 recession and for the unemployment rate to return to prior levels. The Fed has telegraphed plans to keep rates at current levels near zero until employment recovers, and getting back there could be more difficult considering the public sector struggles. It might behoove investors to keep a close eye on the government jobs section of the coming November payrolls report. In October, government employment fell by 268,000. A lot was driven by a drop in temporary 2020 Census workers, but job losses also occurred in local government education and state government education, the Labor Department said.

Several Fed speakers are on the calendar this week, so consider watching headlines to see if they have anything new to say about the job situation.

Amid Vaccine Euphoria, Drug Progress Also Seen: Even as vaccines dominate the news, don’t necessarily count out antiviral drugs making another contribution to the fight against COVID-19. Data from Merck & Co., Inc.’s MRK clinical trials of its antiviral could be available in the next couple of months, MRK told the media toward the end of October. This drug could treat mild forms of the disease or perhaps even be used prophylactically.

And last week, The US Food and Drug Administration (FDA) said it had issued an emergency use authorization for Eli Lilly And Co’s LLY monoclonal antibody therapy to treat mild to moderate coronavirus infections in adults and children. The single antibody treatment, called bamlanivimab, is the first monoclonal antibody to be authorized for use in treating coronavirus. The idea is to kick-start an immune response against infection, CNN reported.

Some advantages for COVID-19 drugs is that they likely won’t face some of the challenges a vaccine does, including possible anxiety among some people about getting vaccinated and the logistical issues around transportation and distribution (some vaccines have to be kept at incredibly cold temperatures). Many analysts say a vaccine would likely be the gold standard to let society get back toward more normalcy. But treatments that make it easier and quicker to recover from COVID-19 also help things return to normal and potentially save lives.

Expert Opinion on Vaccine: This isn’t a medical column, so it’s important to turn to the experts if you want to assess Moderna Inc’s MRNA vaccine results and possible impact. According to at least one expert, it looks like the company hit the ball out of the park. Dr. Robert M. Wachter, chairman of the Department of Medicine at the University of California, San Francisco, tweeted Monday that the MRNA results prove Pfizer Inc.’s PFE results were no fluke and indicate that scientists targeted the right “spike protein” in the virus. Those are the clinical takeaways. Perhaps more important if you’re an investor, Wachter also listed a logistical point: MRNA’s vaccine will make distribution easier due to no need for a special freezer. “If all goes right, both companies will be churning out vaccines by early 2021,” Wachter wrote. Best of all? Back to “normal by late ’21 is possible,” he added.

Photo by Nathália Rosa on Unsplash