Tesla's Up 256% Since It Appeared On Our Top Ten Names In May: Now Is A Good Time To Hedge It.

Astronauts on board the SpaceX Dragon capsule approach the International Space Station on May 31st (photo via SpaceX).

At the end of May, Elon Musk's SpaceX sent two astronauts into space - the first manned launch from U.S. soil in nine years. Also at the end of May, Tesla Inc TSLA made our list of top ten names. Since then, the stock is up 256%.

Our system is still bullish on Tesla. Our analysis of total returns and options market sentiment put Tesla in the top ten again on Wednesday. It was the only name from the May 28th top names cohort to appear in the November 25th cohort. Others, however, have suggested Tesla's valuation may have gotten ahead of itself.

Wiesenthal also suggested that Tesla's spike was a bubble driven by desperate speculators.

Maybe It's Worth Hedging Here

Even if you're bullish on Tesla, it might make sense to hedge here, in the event the stock corrects in the near term (as it did earlier this year). Here's one way to do that.

I tried hedging 100 shares of Tesla against a greater-than-20% decline over the next several months two ways: ones with optimal puts (uncapped upside) and once with an optimal collar (capped upside).

On Wednesday, if you scanned for an optimal put to hedge Tesla against a >20% drop over the next 6 months, you would have gotten this error message. 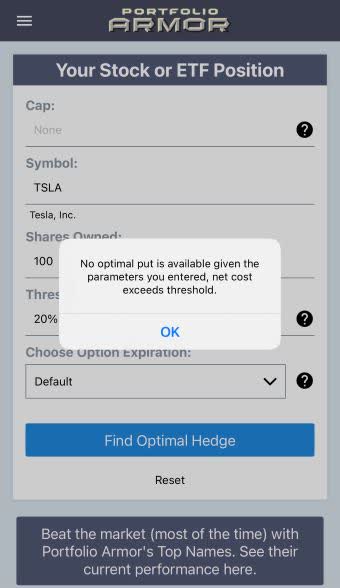 What "net cost exceeds threshold" means is that the cost of hedging against a >20% decline was more than 20% of your position value. So, by buying that hedge, you would have incurred more than the loss you were looking to prevent.

If you were willing to cap your possible upside in Tesla at 38% over the next six months, this was the optimal collar to protect against a >20% decline over the same time frame. 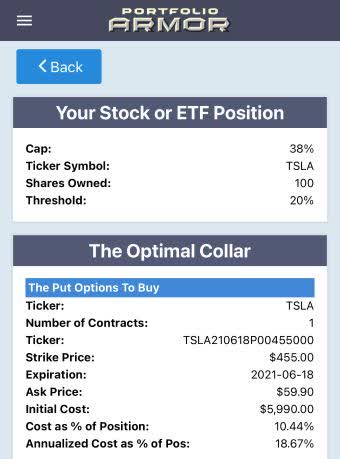 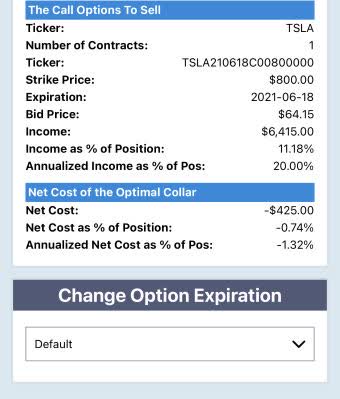 Here the net cost was negative, meaning you would have collected a net credit of $425, or 0.74% of position value, when opening this hedge, assuming, conservatively, that you bought the puts and sold the calls at the worst ends of their respective spreads. That worked out to an annualized cost as a percentage of position value of -1.32%.

When Tesla Pulls Back

If Tesla pulls back within the next few months, you'll be able to buy-to-close the call leg on the collar above for a lot less than you got for selling it, and you'll be able to sell the puts for a lot more. If you're still bullish on Tesla then, you sell those appreciated puts to buy more shares.