A Snapshot Of Bitcoin's Decade-Old Existence

Bitcoin has come a long way from being a questionable unit of transaction for illicit uses to near-mainstream acceptance.

It hasn't been a cakewalk for the digital currency.

Satoshi Nakamoto, widely recognized as the founder of bitcoin, mailed the white paper "Bitcoin: A Peer-to-Peer Electronic Cash System," to a cryptographic mailing list on Oct. 31, 2008. This paper set the ball rolling on the development of bitcoin.

It remains unclear whether Nakamoto is a single person or a group, and he or they have since disassociated from the currency. The rationale for bitcoin was to establish a peer-to-peer transaction without the intermediation of banks, which were at the time caught in the eye of the financial crisis that reverberated through global economies.

See Also: Cryptocurrency Mining: What It Is, How It Works And Who's Making Money Off It

How Bitcoin Traded Over The Years

Since bitcoin wasn't traded on any exchange in 2009, the first available quote is from 2010.

For much of 2010, the cryptocurrency traded at anemic levels, with the highest recorded price for the year being 39 cents.

The crypto achieved dollar parity in early 2011. It breached the $100 level as well as the $1,000 level in 2013. From late 2013 until January 2015, the crypto underwent a correction, dropping about 80 percent of its value in the bargain in the wake of scandals including Mt. Gox. 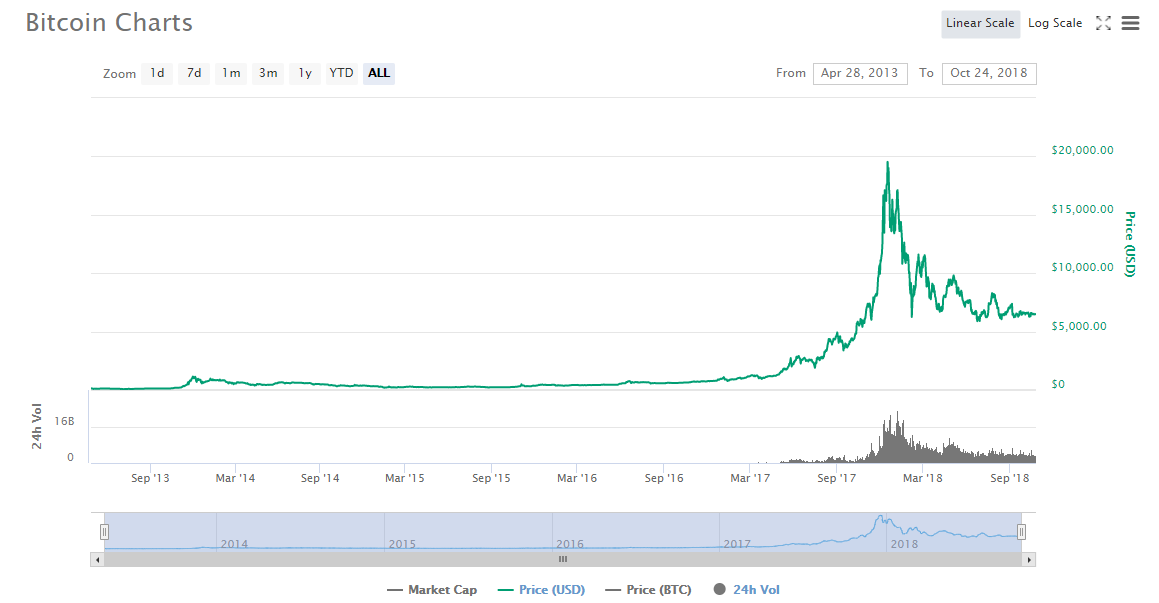 After advancing a moderate 35 percent in 2015, Bitcoin appreciated over 200 percent in 2016, ending at more than $960. The cryptocurrency realm as a whole was bullish in 2017, with bitcoin recording a mammoth gain of about 1,370 percent for the year.

Rising interest in cryptocurrencies; the realization they could come in handy during times of political turmoil; the ICO craze; the SegWit upgrade that increased transaction capacity; and wide media coverage are among the catalysts that sent cryptos soaring, according to Forbes contributor Charles Bovaird.

The rally seems to have lost steam in 2018, as bitcoin has pulled back by about 54 percent year-to-date.

Notwithstanding the lackluster performance so far this year, bitcoin could still see redemption, with the likely approval of a bitcoin ETF by the SEC seen as a catalyst.

"The Bakkt Bitcoin (USD) Daily Futures Contract is a physically settled daily futures contract for bitcoin held in Bakkt LLC, ICE's Digital Asset Warehouse, and will be cleared by ICE Clear US, Inc," the exchange said.

Given favorable developments including bitcoin futures, a bitcoin ETF could become a reality in the late first quarter of 2019, Ran Neu-Ner, host of CNBC's "Crypto Trader," recently tweeted.

I can confirm after SEC discussions, the below statement is true post the meeting held with new SEC commissioner Elad Roisman.This means,a Bakkt,physical settled futures that requires actual purchase of BTC & ETF which also requires purchase in the next 6 months, you do the math. pic.twitter.com/28Tm5rMCzY