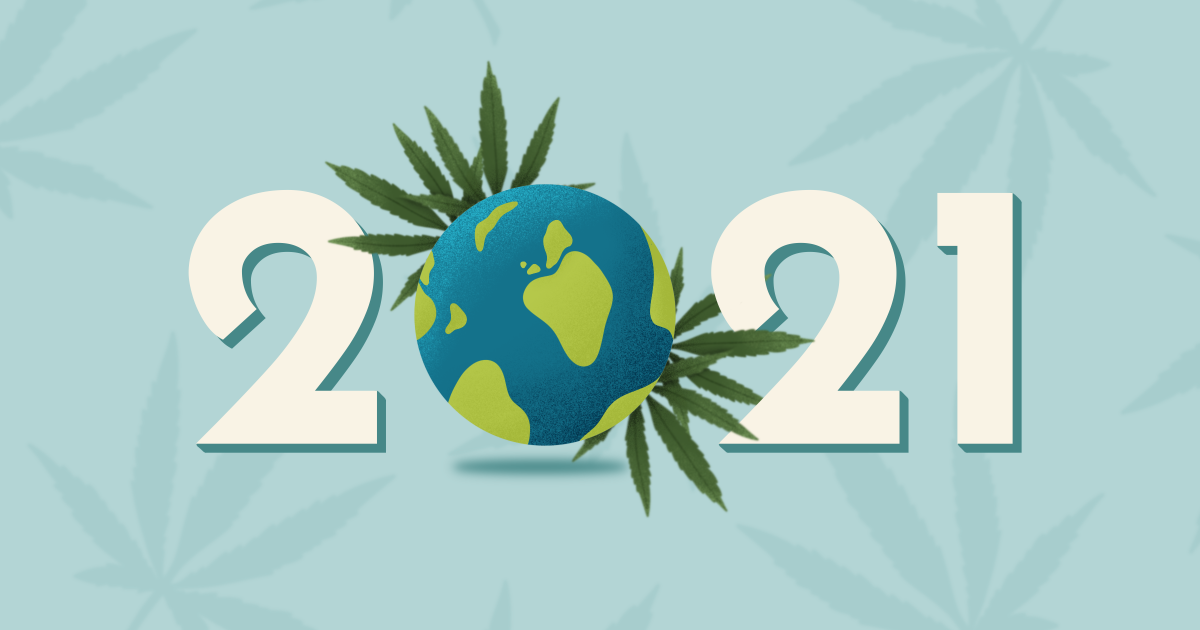 Yesterday we covered the U.S. states that could legalize cannabis this year. Now, let's talk about the rest of the world.

While many eyes are on the United States right now, particularly when it comes to the tumultuous handover of the presidency to Joe Biden, the cannabis industry is much broader than just the U.S., and in 2021, we may see several more countries legalize the plant for medical or recreational use.

This is partly due to the change in scheduling from the U.N., removing cannabis from its Schedule IV category, in addition to European courts deeming that CBD isn't a narcotic. These two rulings will certainly bode well for countries looking at regulatory bodies when deciding their stance on cannabis.

Recreational cannabis is currently legal in Canada, South Africa, and Uruguay, 15 states in the United States and the Australian Capital Territory in Australia. And, based on 2020, there are several countries that look positioned to join these countries in legalizing recreational-use marijuana.

Mexico is the first country that looks ready to legalize cannabis, after years of deliberation and effort.

In fact, Mexico was due to decide whether the country would legalize cannabis back in late October of 2019 after it was deemed unconstitutional to ban cannabis use and possession. The Supreme Court actually issued five rulings decrying the unconstitutional nature of cannabis prohibition, which argued that cannabis's prohibition was against "the right to the free development of the personality," as the country's constitution states.

However, the October legislation was postponed until April 2020, so that the country could iron out the proposed legislation, which was again pushed back to December 2020 due to COVID-19.

Finally, in December, 4/5ths of the Mexican Senate passed a bill to legalize recreational cannabis and a cannabis market, allowing adults to carry 28 grams of cannabis and grow up to four plants.

The bill must now go through the lower house in order to become law, though it looks very likely that Mexico may pass the bill within the next few months.

The legalization of cannabis, if done correctly, would deal a huge blow to the illicit market, and reduce the number of fatalities associated with illegal drug dealing. Some analysts have attributed 55% of Mexico's homicides to the War on Drugs, which is why Mexico's President, Andrés Manuel López Obrador no longer favours a prohibition-styled policy when it comes to cannabis.

"In the matter of narcotic drugs, the prohibitionist strategy is already unsustainable, not only because of the violence generated by its poor results in terms of public health," Obrador stated.

Cannabis has been illegal in Mexico since the 1920s, a status quo that would remain in place for nearly 90 years until Mexico decriminalized possession of small amounts of cannabis in 2009.

The second country that seeks to legalize cannabis is Israel, who, like Mexico, has been discussing cannabis legalization for many months now.

"It's time to make progress and legalize cannabis in Israel," said Justice Minister Avi Nissenkorn in November regarding a new bill that has been introduced in Israel that seeks to legalize recreational-use cannabis for adults aged 21 and over.

The bill was formulated by the inter-ministerial committee for the regulation of Israel's cannabis market and is expected to be drafted and arrive shortly on the Knesset floor, which is Israel's legislative body. Should the bill be passed, it's believed that cannabis could be legalized within 9 months afterward.

Nissenkorn went on to say that "this is a significant, holistic and responsible reform, which shows the State of Israel isn't ignoring reality and is going in the footsteps of developed countries."

The bill was originally introduced on the 24th of June last year when the parliament of Israel approved the preliminary reading of two bills that aim to decriminalize and fully legalize the recreational use of cannabis and its supply chain.

According to the proposed bill, Israeli citizens aged 21 and over will be allowed to use cannabis and to purchase it at designated stores. Smoking in public places, however, will be forbidden.

Israel has previously floated the idea of cannabis legalization in the past, so whether this bill becomes actualized remains to be seen, however, even the Prime Minister, Benjamin Netanyahu has previously expressed his desire to have cannabis made legal, saying that he wishes to "resolve the issue of decriminalization and legalization."

The chairwoman of the Blue and White MK of the Knesset's Special Committee on Drug and Alcohol Use, Michal Cotler-Wunsh, also stated:

"I see great importance that these two bills [to decriminalize and legalize cannabis] be put forth as a single bill, which will be a responsible, holistic step for Israel without compromise. I am committed to leading, advancing, and supervising the application of these recommendations for reform while doing the preparations required in the memo on time."

The final country we see potentially legalizing cannabis in 2021 is the Grand Duchy – Luxembourg.

In fact, we actually had Luxembourg picked for legalization last year, but of course, COVID-19 threw a spanner in the works.

While it may be just a four-hour drive from Amsterdam where the weed is flowing (despite not being entirely legal), Luxembourg is planning to keep things a little closer to home by legalizing cannabis for recreational use within the next two years. This would make Luxembourg the first country in the EU to make cannabis completely legal, while ensuring that its citizens aren't frequently bringing their economic activity to Amsterdam for cannabis.

In 2019, legislators in Luxembourg voted unanimously in favor of legalizing the medical use of cannabis, and in July in 2019, the government announced a two-year plan to legalize recreational cannabis.

The plan was explained to Politico by Luxembourg's Health Minister Etienne Schneider, a vocal proponent of cannabis legalization, who stated that the "drug policy we had over the last 50 years did not work."

Forbidding everything made it just more interesting to young people. Etienne Schneider, Health Minister of Luxembourg

The proposed legislation, introduced by Schneider and Justice Minister Félix Braz, would see that the entire cannabis market would become legal, including possession, production, and consumption. Home cultivation would remain illegal and purchasing cannabis would also remain illegal for non-residents.

Banning cannabis to non-residents, according to Schneider, is an attempt to prevent cannabis tourism, as Schneider has previously stated that "Luxembourg will not be the new Amsterdam."

According to Politico, the "three parties that form the governing coalition in Luxembourg all included legalizing recreational cannabis in their governing agenda, largely driven by young members."