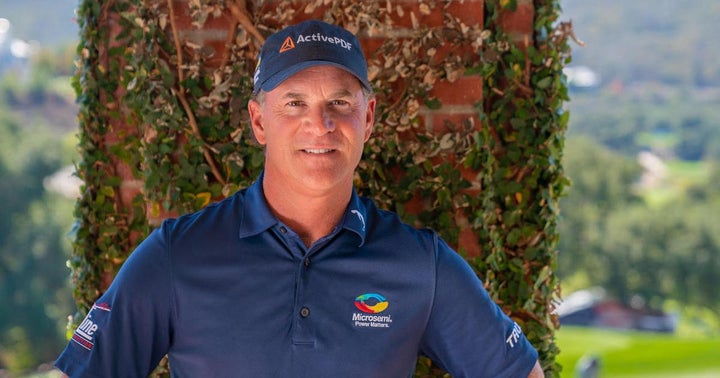 PGA Tour Champions player Scott McCarron has been playing remarkable golf over the past two years.

After finishing second on the money list in 2018, McCarron capped off the 2019 season with a Charles Schwab Cup victory in dramatic fashion on Nov. 10 and topped the money list.

What was the catalyst for McCarron’s success?

“I started taking the pill at night before bed and I noticed my sleep got a lot better. The reason I noticed was because I wear a device called WHOOP, that tracks my sleep, strength and heart rate variability,” McCarron told Benzinga.

“After taking CBD oil for a week, through the device I noticed my sleep was as good as it has been for a year. I was in the green everyday, which I had never been before since I got the device.”

The 'Titleist Of CBD'

The three-time PGA Tour winner said he was first introduced to the product when a representative of Functional Remedies, a brand he now endorses, left some in his locker at a tournament in Florida.

“I said, okay there must be something to this CBD oil because my sleep has never been so good. I start feeling better, not as sore, and at that point I decided this was something I wanted to start taking, and then I formed a partnership with Functional Remedies,” McCarron said.

The golfer calls Functional Remedies the "Titleist of CBD oils" in the fact that they make everything from start to finish.

Titleist, a subsidiary of Acushnet Holdings Corp (NYSE:GOLF), is arguably the top golf ball brand in the world

"They know all of the properties going into the products and I’ve been playing very well since I started taking it two years ago. “

McCarron said while initially taking the product at night, this year he started taking CBD oil before his rounds when felt a little more nervous or anxious and says it calmed his nerves before teeing off in high pressure situations.

“I saw that I was a little calmer on the golf course. I am kind of guy that is running full bore all the time, your brain is always going on the course so those were the three benefits I noticed; better sleep, less sore and calmer.

"At 54 years old, doing what I do playing golf professionally and working out, you are going to be sore, but I noticed I wasn’t getting as sore."

McCarron says the Champions Tour has no restrictions for CBD oil, but the PGA is weary about players taking products with CBD because the Tour tests for THC and with different companies, you don't always know what you're taking.

Since the industry is developing products that are becoming more legitimized, McCarron expects to see more professional golfers form partnerships with CBD companies.

“The Tour wants the players to know what they are taking before they are taking it," he said. "Now that there are companies like Functional Remedies, where you can take their products without the worry of a negative drug test. I think you are going to see more and more golfers sign endorsement deals with CBD company."

Was Tiger Woods Chewing CBD Gum At The Masters?

During the Tiger Woods and Phil Mickelson’s head-to-head battle in Las Vegas in 2018, many viewers noticed both players chewing gum during the round and speculated what type they were chewing. Nerves certainly appeared to be a factor as both players were competing for the biggest money prize in golf history. Both players were also seen chewing gum during the Masters in 2019, but what brand they're using is still yet to be revealed.

“As far as I have heard, they are chewing CBD gum. Now I have not asked Phil or Tiger, so I cannot say for sure, but I would be very surprised that after all these years these guys never chew gum on the golf course and all the sudden CBD gum becomes available and they are not chewing that,” McCarron said.

A CBD company making a push at marketing to an older demographic with the Champions Tour certainly does make a lot of sense. It's the segment of the market that arguably the most skeptical of CBD and places the most stigma on the product.

McCarron agrees with this sentiment.

"[T]hose people need it the most. The Champions Tour is the perfect market for Functional Remedies and any CBD oil company.”

He surmises that roughly 75% of Champions Tour players are taking CBD oil with about 30% of PGA Tour players using it.

Alcohol has long been the go to choice for amateur golfers to cure inevitable nerves on the first tee or during the whole round for that matter.

“If we could educate people about the benefits of taking CBD oil before you play, that it will take away some of that anxiousness on the golf course and you won’t have to drink. I think it will help a lot of people out there and it will help their golf games.”

It's certainly working for him.