The S&P 500 traded lower by more than 10 percent Wednesday morning as investors digest the latest developments in an ongoing Sino-American trade dispute.

On Wednesday morning, President Donald Trump expressed skepticism about a potential trade deal with China, tweeting that the current framework for a deal to avoid an exchange of tariffs between the two countries may be more difficult than anticipated.

“Our Trade Deal with China is moving along nicely, but in the end we will probably have to use a different structure in that this will be too hard to get done and to verify results after completion,” Trump said.

Trump has demanded that China reduce its U.S. trade deficit by $200 billion over a two-year period. Investors were optimistic about the potential outcome after Treasury Secretary Steven Mnuchin said over the weekend that the trade war with China is “on hold.”

Much Ado About Nothing?

So far, analysts have been downplaying the potential long-term impact of the trade talks.

“This supports our longstanding view that the temporary trade dispute will de-escalate over time through negotiation,” Xing said.

Height Capital Markets analyst Clayton Allen said Wednesday that there is still headline risk for investors in the near term.

Allen said Commerce Secretary Wilbur Ross’ upcoming trip to China will likely be overshadowed by the potential North Korea summit, and that the outcome of the North Korea meeting will likely have a much larger impact on the ongoing trade negotiations with China.

“Our base case remains an agreement will be reached between China and U.S. that will have minimal negative incremental impact on the Chinese economy, or the U.S. economy for that matter,” Lynch said.

Investors are clearly concerned with a potential breakdown in trade negotiations. The SPDR Dow Jones Industrial Average ETF (NYSE:SPY) is down 0.6 percent in the past two days, and the iShares FTSE/Xinhua China 25 Index (ETF) (NYSE:FXI) is down 2 percent. 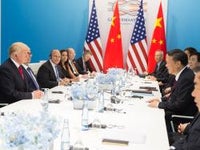