Amazon.com, Inc. (NASDAQ: AMZN) is scheduled to report its 2Q results on July 28.

Goldman Sachs’ Heath P. Terry maintains a Buy rating on the company, while raising the price target from $750 to $900.

Terry expects the company to report its revenue for 2Q at $29.4 billion, largely in line with the consensus, driven by Amazon’s continued investment in infrastructure and innovation to bring down delivery times and increase order frequency.

The analyst also expects operating income of $1.74 billion, suggesting margins of 5.9 percent or 129 bps year-on-year growth, as compared to the 259 bps increase in 1Q.

For AWS, Terry believes the company will report 58 percent year-on-year growth in revenue for 2Q as compared to the 64 percent reported for 1Q, “as new capacity comes online offsetting modest price cuts at the beginning of 1Q.”

“While we estimate 2Q AWS revenue growth will decelerate 6pp as a result of the tougher comp, we believe the rapid pace of migration of workloads to the cloud and Amazon’s investments in capacity in 2016 could accelerate growth in 2H16,” Terry stated.

For e-commerce, North American revenue growth is expected at 28 percent, with reported international growth of 17 percent.

Did you like this article? Could it have been improved? Please email feedback@benzinga.com with the story link to let us know! 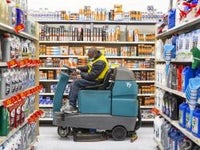 UPDATE: JP Morgan On Amazon: Co. Remains Firm's Top Pick Overall As It's Well- Positioned To Be The Market Leader In The e-Commerce And Public Cloud As Secular Shifts Remain Early