In a report published Monday, Morgan Stanley analyst Fotis Giannakoulis assured investors that the Greek crisis “has no direct impact on shipping companies.” The only headwinds to Athens-based maritime firms, he says, would come from side effects on the global economy.

Giannakoulis notes that “nearly 20 percent of the global fleet is controlled by Greek owners and is managed out of Athens,” giving Greece the largest share of any country.

Furthermore, according to GIannakoulis, the shippers keep their cash in non-Greek banks, eliminating any negative effects of capital controls announced by the Syriza government on Sunday. And with mobile assets sailing worldwide, he believes that a disruption in one small country without major international market share “is more like business as usual.”

Looking in the opposite direction, the Morgan Stanley analyst highlights the fact that “Greek” shipping companies have relatively low exposure to Greek banks. Petrofin research estimated that they owned about $10.8 billion in debt for the firms at the end of 2014 — less than 17 percent of total bank loans to Greek shipping companies. Giannakoulis believes that figure has dipped further since.

In fact, the one significant impact that he thinks a Grexit could have on Greek shipping companies is a good one. The depression of domestic wages that would ensue under an economic collapse, he says, would reduce labor costs. 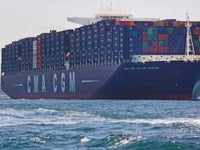 Container Rates Are On Fire. How Can You Invest In That?

How Costamare's Steep Dividend Cut Earned It An Upgrade From JPMorgan

Is Costamare's Dividend At Risk?