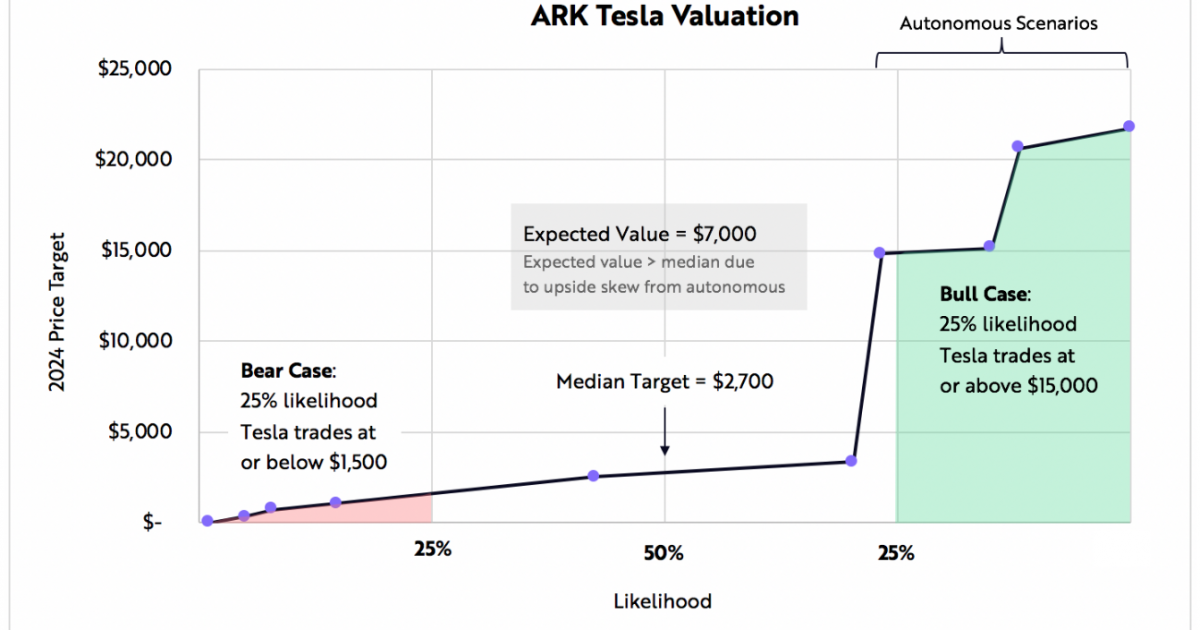 Price targets are as follows:

The numbers are remarkable; ARK’s valuation is based on probability weighted scenarios and the assumption Tesla issues debt and equity capital to scale production and capitalize on its first-mover, competitive advantage.

“Based on this probability matrix, our bear case implies that Tesla will sell 3.2 million vehicles in 2024, cutting its share of total EV sales roughly in half compared to today’s levels. Our bull case implies that Tesla will maintain it’s roughly 18% market share, and that a substantial percentage of its fleet will generate high-margin robotaxi platform flees,” according to ARK.

Analysts at the firm acknowledge the calls are far-fetched, but suggest that research into gross margins and Wright’s Law is explanatory.

“In the fourth quarter of 2019, Tesla reported auto gross margins of 20.9% excluding regulatory credits. Based on Wright’s Law and expressed in ARK’s model, Tesla’s auto gross margins could approach 40% in 2024, though they are unlikely to increase in a straight line as new models launch and production scales,” according to ARK.

In regards to capital efficiency, ARK assumes Tesla will build factories for $11,000 per unit volume of capacity: “For context, Tesla confirmed that $1.5 billion in financing was necessary for its Shanghai factory, which will have an initial capacity of 150,000 vehicles. If $1.6 billion were to net 150,000 vehicles, the cost per unit of initial capacity would be roughly $10,700 before increasing productivity.”

Analysts at the firm also suggest Tesla has the know-how and technology to create a multi-transactional business model.

“Tesla could set rates comparable to the $2.50 per mile that Uber and Lyft charge today, dropping them to $1 per mile in 2023. We model that Tesla will take a 50% cut of gross revenues from autonomous taxi networks, much higher than the 20-30% cut that Uber and Lyft enjoy today,” according to the report.

If you want to get your latest fix on what Tesla and Elon Musk are up to, check out part 2 of Third Row Tesla's interview with Elon and Kimbal Musk.

ARK Invest analyst Tasha Keeney joined Benzinga’s PreMarket Prep on Wednesday to discuss her bullish take on Tesla Inc (NASDAQ: TSLA), what she’s looking for in today’s earnings report and why ridehailing is an important opportunity for the read more

Benzinga has examined the prospects for many investor favorite stocks over the past week. The week's bullish calls included a social media leader, a ride-sharing play and an unloved apparel stock. read more

'Profitability In Sight': Why These Analysts Are Bullish On Lyft

Lyft Inc (NASDAQ: LYFT) announced fourth-quarter earnings after close Tuesday and analysts shared their takeaways on the report and what could be next. The Lyft Analysts: DA Davidson analyst Tom White maintains a Buy rating and raises the price target on Lyft to $66. read more