Stock Wars: GM Vs. Ford Vs. Tesla Vs. Toyota 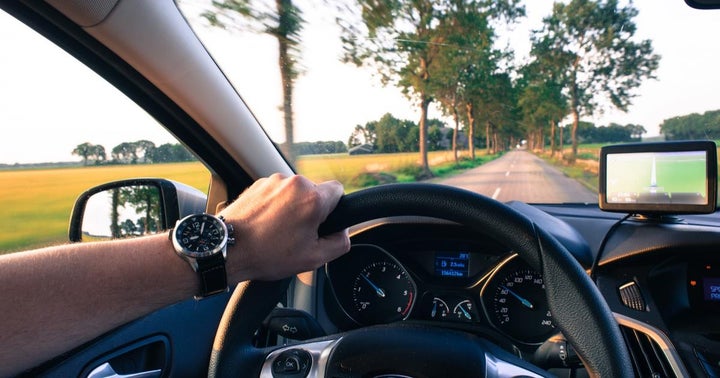 Dave Royse contributed to this report.

Despite a booming market and an overall 52.4% gain for the S&P 500, none of these big automakers has managed to produce a double-digit return for investors over the past five years.

Auto investors are much more concerned about the next five to 10 years at this point.

When looking at U.S. auto sales, it’s not cars, but light trucks, SUVs and crossovers that matter — because that’s what Americans are buying.

Companies that are heavily invested in cars, which made up just 20% of sales by American automakers last year, aren’t as likely to succeed at this time as those focused on trucks and SUVs.

Take Fiat Chrysler Automobiles NV (NYSE:FCAU), which is all-in on trucks, led by its Ram series.

As a result, it was the only one of the traditional “Big 3” American automakers last year to see a sales increase, posting a 9% jump in sales while Ford and General Motors both saw overall year-over-year sales declines.

Fiat Chrysler has basically left the car market in the United States.

Ford is coming along. It pared down its car offerings last year to focus more on SUVs and trucks, along with another trend Ford sees coming down the road: electricity.

With a market shifting to truck and SUV sales, the advantage in product mix right now would seem to belong to Fiat Chrysler given the strength of its Ram brand and last year’s sales figures.

Despite the American appreciation for bigger vehicles like SUVs, another major catalyst for strength in the auto industry over the next several years is expected to be more efficient electric vehicles.

In an interview with Fast Company last year, GM CEO Mary Barra named the move to electrify the country’s cars as one of the major trends she sees in the coming years, along with autonomous vehicles and car connectivity and ridesharing.

Tesla should be the obvious leader in the EV movement, since it is the only big carmaker that makes solely electric vehicles.

But it’s hard to say who might come out on top in the EV space, because all of the carmakers see it as an important part of their future.

Ford said last year it will more than double its spending on its EV program, and Barra has promised to make electric cars profitable for GM — something no one’s been able to yet do — by 2021.

While not winning on pure electric sales, Toyota’s hybrid sales were trending up in the first half of the year, putting it on track to be the U.S. market leader in “green vehicle” sales in 2019.

Navigant Research ranks which car companies are leading in the race to bring fully autonomous vehicles to market. The leader in technology in the space isn’t a car company, but Alphabet Inc. (NASDAQ:GOOGL) (NASDAQ:GOOG)’s autonomous tech company Waymo.

But right behind Waymo in the most recent Navigant rankings on autonomous vehicles are GM’s self-driving Cruise unit and Ford, both of which are considered be the farthest along in the race among American carmakers.

Leading in auto innovation is one thing, but investors are likely much more concerned about the long-term value of the auto stocks, especially after such weak performances for the group in recent years.

Here’s a breakdown of how Toyota, GM, Ford and Tesla look from a long-term fundamental standpoint after their disappointing multiyear run.

A price-to-earnings ratio is one of the most basic fundamental metrics for gauging a stock’s long-term value. The lower the PE, the higher the value. Here’s how the current PEs for these five big names compare.

Tesla is the only one of the four auto stocks without positive earnings, with the other three names well below the S&P 500 average PE of 22.2. Looking ahead, GM, Ford and Toyota all have extremely low forward PE ratios, while Tesla’s 47.9 is on the high end of the range for similar growth stocks.

When it comes to evaluating a stock, price is not everything.

The growth rate is also critical for companies that are rapidly building their bottom lines. The price-to-earnings-to-growth ratio is a good way to incorporate growth rates into the evaluation process. Here’s a comparison of the PEGs of these four names. 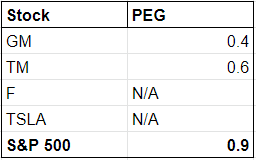 GM and Toyota are the clear leaders when it comes to PEG. Both stocks are priced well below the S&P 500 average of 0.9. Ford’s future five-year earnings growth is projected to be negative, and Tesla has yet to demonstrate it can consistently turn a profit at scale.

When a company reinvests a large portion of earnings back into the company for the purpose of expanding operations and growing the business, earnings numbers aren’t the best measure of a company’s performance or a stock’s value.

Instead, investors may choose to focus on sales, which indicate how much business a company generates. Total sales can be the best indicator of a company’s growth and potential. Take a look at the price-to-sales ratios for each of these four companies. 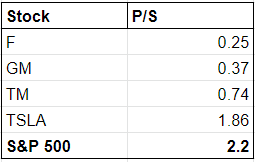 Ford may not have the earnings growth of GM or Toyota, but it's the best value of the bunch based strictly on sales. GM and Toyota are also a relatively strong value based on their sales, while Tesla is reasonably priced relative to the S&P 500 average.

Finally, during periods of extended weakness, such as the one auto stocks have been experiencing over the past five years, a stable quarterly dividend payment can at least reward investors for their patience.

Dividend yield represents the annual return that investors can expect if a stock’s share price gains zero in a given year. The higher the dividend yield, the better. 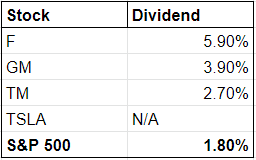 Ford is clearly the king of the auto dividends, with a 5.9% yield followed by GM at around 4%. Toyota pays a relatively high 2.7% yield, while Tesla is still likely years away from instituting a dividend.

Tesla aside, all the major auto stocks appear to offer compelling values for long-term investors based on a handful of popular Wall Street metrics.

While it’s always difficult to choose a potential winner over a five- or 10-year period, GM is the only one of the four stocks that ranked first or second in each of the four fundamental categories.

On CNBC's "Trading Nation," Todd Gordon of Inside Edge Capital Management said auto stocks are on the move. read more

Why This Investor Sold General Motors, Bought This EV Stock

Ford Motor Company (NYSE: F) shares are trading higher after the company announced it spent $250 million to expand its new factory. The new factory will produce the battery-powered F-150 Lightning to tap into the demand surge for electric vehicles. read more

This Warren Buffett-Backed Automaker's OTC Stock Has Given Better 1-Year Returns Than Tesla, Nio And Ford