Turn The Faucet On For This ETF

Dating back to last year's U.S. presidential election campaign trail, investors have been hearing a lot about infrastructure and the related investments. That theme, while still potentially potent, has been dealt a blow this year as the Trump administration has indicated 2018 will be the year in which it attempts to deliver on its massive infrastructure initiative.

There are some corners of the infrastructure investment landscape represented by exchange-traded funds that still merit consideration. That group includes water-related investments and ETFs such as the PowerShares Global Water Portfolio (ETF) (NASDAQ:PIO). The PowerShares Global Water Portfolio is up 8.2 percent year-to-date and was one of a small number of ETFs to hit a 52-week high on Monday.

Over the years, water as an investment thesis has earned increased credibility and that theme has become more accessible thanks to ETFs such as PIO.

“There is a fixed amount of water available worldwide, with 97.5 percent of it in the form of salt water unfit for human consumption,” said PowerShares in a recent note. “Of the remaining 2.5 percent, more than two-thirds of it is frozen in ice caps. The world’s population now stands at roughly 7.3 billion, and is expected to grow by a third to 9.7 billion by 2050. The United Nations estimates that only 1 percent of the world’s fresh water supply is accessible enough to meet the needs of a rapidly expanding world population.”

The Pitter-Patter Of PIO

The $183.3 million PIO, which is nearly a decade old, follows the NASDAQ OMX Global Water Index. That benchmark is comprised of “companies listed on a global exchange that create products designed to conserve and purify water for homes, businesses and industries,” according to PowerShares.

Water infrastructure is a global theme and PIO reflects as much as U.S. stocks account for just 36.2 percent of the ETF's weight. The U.K., Switzerland and France combine for about 42 percent of PIO's geographic lineup. Overall, 10 countries are represented in the ETF. That group includes three eurozone nations and three emerging economies.

The Business Of Clean Water

Pour A Glass Of This New Water ETF 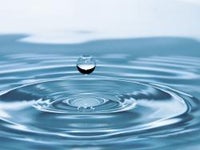 How To Hydrate With A Water ETF

H2 Opportunity With A Water ETF