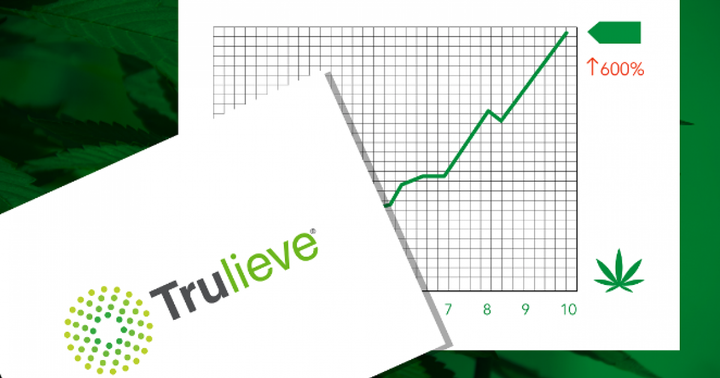 Cannabis companies are experiencing a comeback, and this cannabis stock has climbed over 600% in just ten months.

As we've been discussing recently, the cannabis industry is experiencing a boom as of late, likely spurred on by the recent Democrat gains made in the Senate and Joe Biden's ascendancy to the Presidency.

Given that Democrats are more favorable towards marijuana legalization than Republicans, in addition to Biden's pledge to federally decriminalize cannabis in the U.S., 2021 is shaping up to be a great year for investors in cannabis.

The ETF known as the Horizons Marijuana Life Sciences Index (TSE:HMMJ)—which is considered by many to be the benchmark for the North American cannabis industry—is up over 55.68 on its six-month performance.

Many of the holdings within this ETF, such as Canopy Growth (CGC), Aphria (APHA) and Innovative Industrial Properties (IIPR) have enjoyed significant gains over the past half-year, however, one stock has reached all-time-highs after a steady climb since the beginning of the year.

Let's take a look at this skyrocketing marijuana stock. 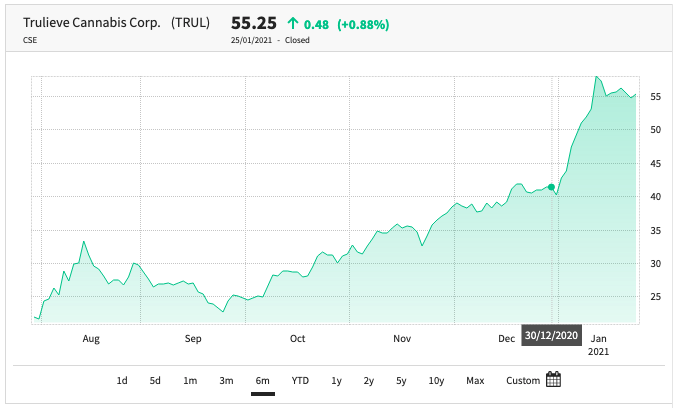 Disclaimer: Past performance is not an indicator of future performance.

Headed by CEO Kim Rivers, Trulieve is a vertically-integrated "seed-to-sale" medicinal cannabis company with a growing network of dispensaries throughout the United States, most of which are situated in sunny Florida. Trulieve was the first company to sell smokeable and edible medical cannabis in the state of Florida, and with 70 of their 75 total dispensaries being in Florida, they are well known and are the first choice for many Floridian medical cannabis patients.

Trulieve's operations span across 5 states, including Florida, California, Pennsylvania, Connecticut and Rhode Island, with operations starting in West Virginia in 2021. BDS Analytics estimates that the combined market value of these states is USD $12.5 billion. With over 500 SKU's in Trulieve's product line and partnerships with brands like Bhang and SLANG Worldwide, Trulieve has cultivated a wide array of cannabis products with brand awareness in order to capture the lion's share of consumers in each state it operates.

In Q3 2020 alone, Trulieve generated over half the EBITDA that it brought in for the entire year in 2019.

Second only to Maine, Florida has one of the oldest populations in the U.S., with 20.5% of its population aged 65 and above. And, as populations increase in age, their likelihood to suffer from a medical condition does too.

This is why Florida has the second-largest medical marijuana market in the country, with its 459,000 registered patients growing rapidly.

Trulieve has established an impressive 1,900,808 sq. ft. of cultivation capacity in Florida, with super-critical ethanol and CO2 extraction and distillation processes that allow the company to produce higher-profit cannabis concentrates.

Beyond Florida, Trulieve has spread its eggs across several baskets, including California, Pennsylvania, Connecticut, and Massachussetts, giving the company a growing footprint throughout the U.S.

Through a series of acquisitions with brands such as Solevo Wellness, PurePenn, The Healing Corner, and Leef Industries, Trulieve has the requisite licenses, cultivation capacity, and retail stores to service patients in each of these multi-million-dollar markets.

Through expanding its national footprint and brand awareness, Trulieve has positioned itself to be a leader in the medical cannabis space.

Trulieve's focus on Florida is a double-edged sword. The company has established a powerful market share in a lucrative state, however it may have done so to the negligence of the rest of the U.S.

However, the multi-year profitability of Trulieve, which looks set to only continue increasing, makes Trulieve a cannabis company to keep an eye on. Additionally, with a 600% increase in stock value in less than 12 months, Trulieve has very little to grimace at for investors looking to make a return on cannabis stocks.

At the end of the day, cash is king – and amid a red sea of unprofitability, Trulieve is a rarity among pot stocks for staying in the green for several years. If they keep this up, the company will cement its position as one of the foremost medical cannabis companies in North America.