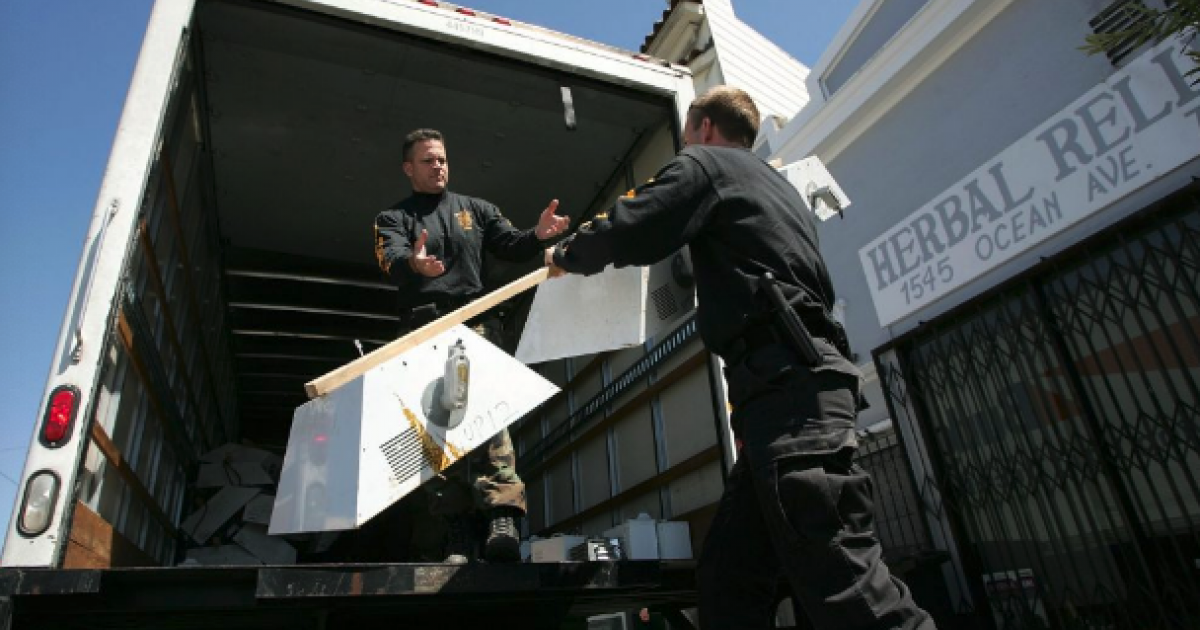 Andres Rondon was miles away from his licensed California cannabis farm when he received an alarming phone call that would set off a years-long legal battle.

Rondon owned Skunkworkx Pharms, a cannabis cultivation operation in Mendocino County, when a worker at the farm called him on a Sunday morning in October 2018 to alert him to a robbery in progress. Because his operation was compliant with the state, Rondon said he immediately called the Mendocino County Sheriff’s Office to apprehend the thieves.

Officers showed up some two hours later, Rondon claimed in ensuing lawsuits, but they showed little interest in investigating a robbery. Instead, he alleges, they quickly left, only to return hours later with a search warrant and a wood chipper.

In lawsuits filed in both California state and federal courts (read the federal complaint), Rondon alleges the deputies ran some 350 cannabis plants – that were a day away from harvesting – through the wood chipper and destroyed several more plant cuttings and pieces of equipment. All told, Rondon claims the allegedly illegal raid cost him more than $700,000.

Rondon, who was never charged with a crime, still has not recovered any of the money or materials he claims he lost. That’s in large part because a California judge and appellate panel both held that the officers involved in the raid were protected from civil prosecution – even if the officers’ actions were “sloppy or malicious,” according to the appellate panel – by the state’s law enforcement immunity provisions.

Rondon’s cases – his state case is likely over, but he is still pursuing action federally – highlight a problem that some criminal justice advocates and civil rights activists view as among the nation’s most ripe for reform: The concept of law enforcement immunity supported by the court system.

Federal judges, through their interpretation of the Civil Rights Act, have broadly applied so-called qualified immunity to law enforcement officers as a way to prevent excess lawsuits brought against officers for carrying out their jobs. Several states have adopted similar provisions that protect local officers. These protections are often used in cases involving police shootings and property seizures, among others.

Rondon’s attorney Arthur Angel said he felt the laws are too often misused to “shield complete lawlessness” on the behalf of law enforcement officers.

Specific to California, Angel noted there are procedures in place to ensure a fair investigation, including that officers must go to a neutral magistrate and show they have solid grounds for a search warrant before receiving one.

“If you pervert that by just lying or making up stuff to get a warrant, and then go out and seize property without giving the person a chance to contest what you’re doing, to me that’s not law enforcement,” he said. “That’s just a rogue state.”

The Rondon case is not unique.

In upholding the decision to dismiss Rondon’s lawsuit this month, the panel from California’s First Appellate District said it recognized that the application of governmental immunity in cases like his may cause hardships to legitimate cannabis farmers whose crops are mistakenly destroyed “and we are not unsympathetic.”

“Indeed, we recognize that immunizing the conduct of any illegal search stymies efforts to hold to account rogue law enforcement officers and the agencies who employ them,” the panel said.

But the panel wrote that it would be up to the state legislature to change the laws.

Angel, Rondon’s attorney, said he isn’t confident that the California Supreme Court will overturn the lower court decisions, so he’s not planning at this time to continue the state case. Instead, he said, he will focus his attention on the federal case.

The only real exception to the broad immunity typically granted to law enforcement officers by federal judges is if there is established law in the same jurisdiction that already demonstrates to the officer that his or her alleged actions were unconstitutional.

Angel said he believes that exception has been interpreted in a “very narrow way” by mostly conservative federal judges.

As an example, he noted that if someone was shot in the eye by an officer while committing no crime, that person would have to find a similar case from the same jurisdiction in which an officer was ruled to have violated a person’s constitutional rights by shooting them in the eye. If that prior case involved an officer shooting someone in the leg, though, Angel said the courts would likely not rule in the plaintiff’s favor.

To illustrate how this could affect cannabis operators, Angel compared a cannabis operator to a gun shop owner. If a gun shop owner was pulled over with a truck full of guns and had them all seized, he’d likely bring up that his store is legal and he has a constitutional right to bear arms. The officer could still seize the guns, claiming they are part of an investigation, Angel said, and there’s nothing the gun seller could immediately do about it.

“People on the right would be so outraged at that kind of police conduct, but it’s just as bad when it’s cannabis being seized as guns,” he said.

One of the initiatives of the Cato Institute, a libertarian-leaning think tank, is to end qualified law enforcement immunity for police and other agents of the state.

Jay Schweikert, a policy analyst with the Cato Institute’s Project on Criminal Justice, said there is a lot of gray area when it comes to who qualifies for certain immunity protections. It’s unclear, for example, in what ways state employees can investigate offenses that are legal within their state but illegal federally, like marijuana cultivation or use.

Also problematic, he said, is that qualified law enforcement immunity is only initiated on the federal level if a plaintiff can show that the officer or actor in question violated their constitutional rights. Courts, however, can determine that a person’s rights were not clearly established – and thus not violated – at the time of the alleged offense if there is no prior precedent in the jurisdiction.

“In some ways, the problems, in that context, are even more foundational than qualified immunity,” Schweikert said. “Because unless you can show that there was in fact a constitutional violation, qualified immunity doesn’t even come into play.”

The Institute for Justice, which uses litigation to try to limit the size and scope of government, also favors doing away with qualified immunity. The organization lists rebuttals on its website to several of the common defenses of the practice, including that it would lead to several public employees being bankrupted by an onslaught of lawsuits.

The Institute for Justice noted that most settlements are paid by government employers and their insurers, though, and that even when qualified immunity has been overcome, a study by Notre Dame Law Review found that individual officers contributed to settlements in just 0.4% of cases and paid just 0.02% of the total awards that went to plaintiffs.

“There is no reason to believe that ending qualified immunity would cause a drastic shift in those numbers,” the institute wrote.

Schweikert, with the Cato Institute, also noted there is a lack of legal clarity surrounding police seizures. A law enforcement officer technically needs probable cause to seize evidence, but officers are granted a great deal of leeway in making that determination, he said.

The person whose property was seized also faces an uphill battle of getting it returned, Schweikert noted, because it is now their obligation to prove they were not involved in criminal activity. Elsewhere in the U.S. justice system, suspects are generally considered innocent until proven otherwise.

“That can be sometimes a difficult showing because you’re trying to prove a negative, but it also means you have to go through forfeiture proceedings, which can be very complicated and very costly and can take several years,” he said. “A lot of people just don’t have the resources or the ability to navigate that, so it often amounts to what seems like legalized theft. It’s like being held up by the cops and they just take your money.”

He referred to the practice as an egregious one that “raises really grave constitutional concerns.”

“I think the courts have been derelict in not recognizing the due process violations inherent in this practice,” he said.

Although the process of regaining seized items – or compensation for them – is difficult, it is not always impossible.

Several cannabis operators reached settlements this year with the Northern California city of Rohnert Park after claiming the city violated their civil rights by illegally seizing their property, including cannabis and cash.

While all the settlement terms weren’t publicly revealed, the city agreed to pay $415,000 to Ezekiel Flatten, a cannabis operator who claimed he was threatened and harassed by law enforcement officers after suing the city. Among his claims were that he was targeted on social media and discovered a GPS tracking device installed on one of his vehicles.

Among the relief sought in the suit, which states that Mendocino County has made it a custom to conduct unlawful raids on cannabis businesses and engage in illegal cover-ups, are monetary damages and for Mendocino County to be forced to properly train and supervise its employees to prevent further violations.

Angel said he believes the basis for qualified law enforcement immunity – to prevent excessive civil suits for every officers’ mistake – is “legitimate,” but that the flip side needs further consideration.

“When you give people the authority to throw people in jail or give them guns and powers that normal people don’t have,” he said, “the responsibility that comes with that is they’re supposed to act in accordance with the law, not just do whatever the hell they want because they have a personal opposition to marijuana or they don’t like the side of a protest that you’re on or some other motive that distorts their law enforcement responsibilities.”