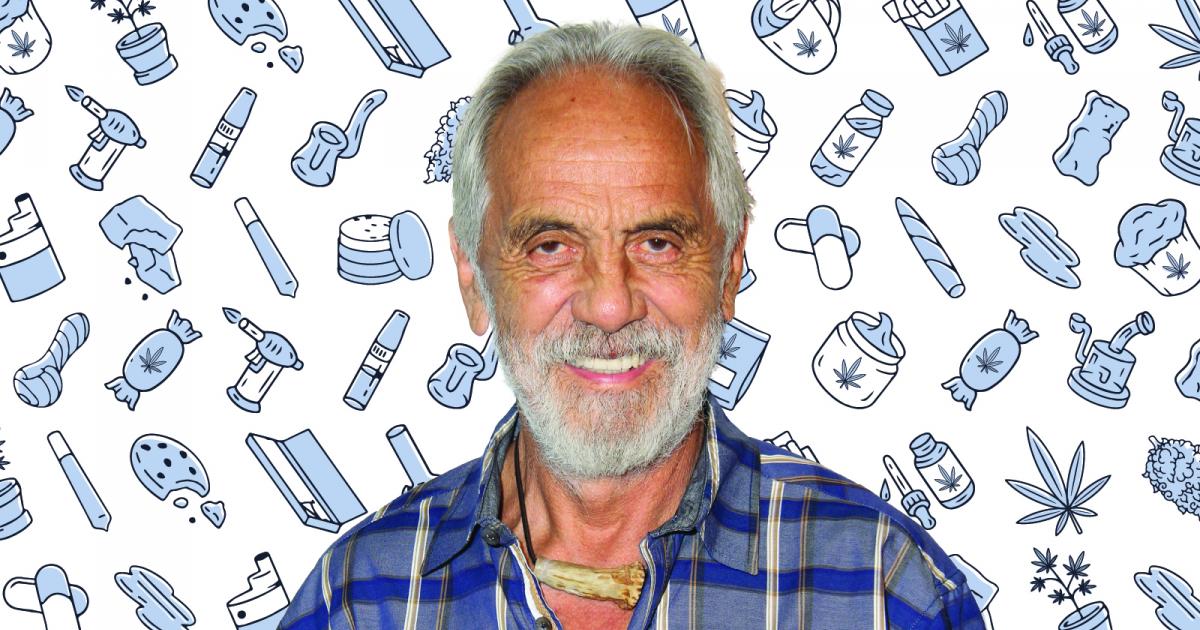 This article was originally published on Weedmaps and appears here with permission.

Tommy Chong exceeds the status of cannabis celebrity. Though he and Cheech were technically the stoner celebs, rising to international stardom in the 1970s by pioneering the genre with their Cheech and Chong franchise, they've since surpassed such worldly roles.

50 years later, Chong functions more as a cultural monolith in the weed world and beyond. Like Jesus, Santa Claus, or Jerry Garcia, the mere mention of his name evokes something magical, mythical, and in his case, super stoned. This kind of ascension can only be achieved through a lifetime of hard work, good vibes, and above all else, being a cool fucking dude.

In addition to his Tommy Chong's line of tinctures, sublingual strips, energy potions, and more, he's slated to pair back up with Cheech — who's been busy building his own weed brand, Cheech's Stash — to open a chain of Cheech and Chong dispensaries in California, starting with San Francisco, then on to Los Angeles.

“On the West Coast, Cheech and Chong are semi-gods,” Chong told Weedmaps. “We're not fully gods, but we're semi. So we're just going to provide the best product we know is out there, and a delivery service in every one of our dispensaries. And we're also going to provide a fun location to go to. It's not going to be as, you know, weird as some of them are.”

Ideas for the dispensaries include television screens playing Cheech and Chong movies, “as well as other stoner movies,” nonstop, appearances by the duo, and virtual art shows.

“Cheech is a world-renowned collector of Chicano art,” said Chong. “They're building a museum in Riverside just for Cheech's art. So we're going to have virtual art shows on the screens too,” he paused, “and I've got a killer bong collection to display.”

In honor of his new venture(s) in a market he helped create, here are the weed products Tommy Chong can't live without  — straight from the Godfather himself.

“My preferred method of smoking is to use a Chong Bong,” said Chong. “It's one of my vintage bongs from the nineties. Jason Harris made it for me.”

Jason Harris, famed glass blower and founder of Jerome Baker Designs, got his start apprenticing with glass blowing god Bob Snodgrass in 1991. Since then, Harris has worked with numerous celebrities to create outlandish and wildly high priced smoking creations. For example, the $18,000 nug jar capable of holding a full pound of flower that he blew for Snoop Dogg. “The Chong Bong retails for about $5000 dollars,” said Chong.

“I have this wooden pipe from Germany, and I actually just did a little commercial for it,” said Chong. “It's a one-hander. There's a built in lighter and a bowl, you can light it up and smoke and everything all with one hand.”

Tommy Chong's PurePipes are handcrafted in Erfurt, Germany. Not only can users light and smoke all with one hand, they're designed specifically for smoking cannabis, with an attention to drawing resistance and volume of the packing chamber.

Chong continued, “It's great for me, because a lot of time when I'm doing cameos they'll want to light up. So I just grab my little solo pipe and away I go!”

“I love my breath strips,” said Chong. “They don't carry that telltale odor, so you can do them anywhere, in church, in prison, or in court! And the best part is, you can function. You can function all day.”

Though this product hasn't hit the shelves just yet, I tried one of these little shots and they really work. I felt alert, focused, and not jittery or anxious like I often do after coffee. And the ingredients are even approved by Chong's uber healthy wife.

“Oh my wife, she's my tester,” he said. “She is so fussy and so healthy. But she loves that energy drink! She takes ballet, and she'll do a bottle before she does that. I should be doing it more.”

When I asked if there were any strains he was particularly into right now, Chong replied, “Honestly, I've lost track of all the strains. When people ask me, I tell them my favorite strain is cannabis. It's crazy because in the government, people try to treat cannabis like alcohol, or some kind of weird drug, and you can't. It's not a drug. It's a medicine that's an herb. It grows wild in the forest. The animals love it. It's a plant that should be respected.”

He continued, “And the people who say it's a gateway drug, well, those gates can be phenomenal. They can swing you into becoming an artist, or a rapper, or an author, or a conductor. Those gates open to all the creative outlets that exist on this planet. So, as we go along with our dispensaries, we're going to really educate the people. It's going to be so much fun. Then, we're going to make so much money that we're just going to retire and never have to work again. You'll see.”