The History Of Cannabis Legislation And An Homage To Its Pioneers 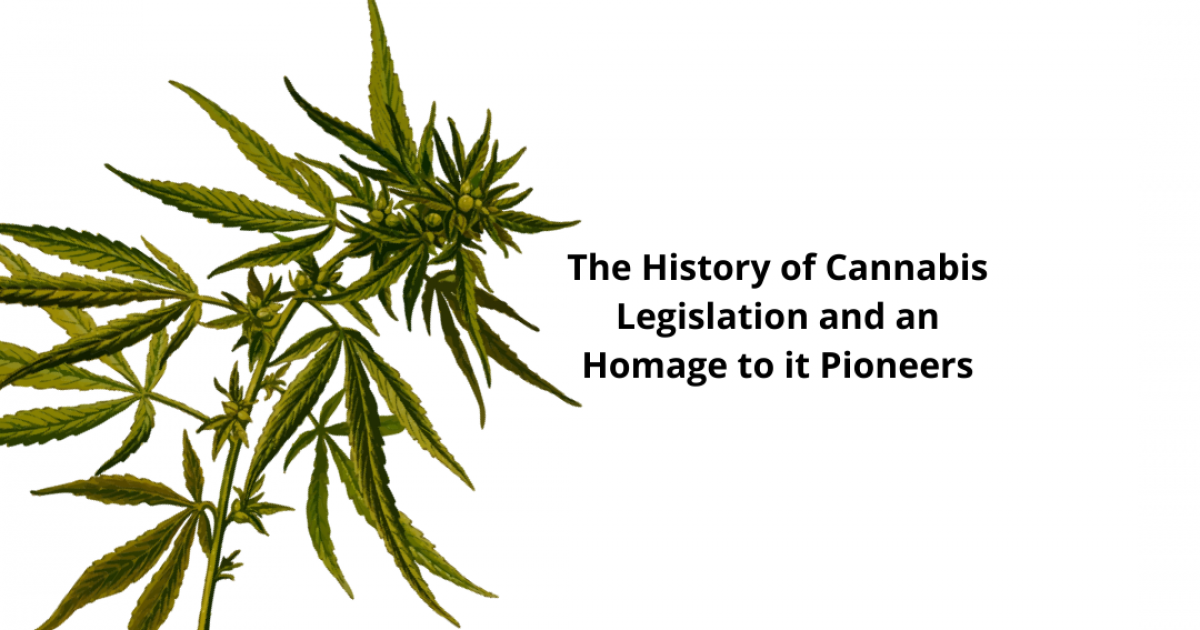 This article was originally published on The Medical Cannabis Community, and appears here with permission.

Anyone who has the slightest interest in marijuana or the cannabis industry is aware that the subject has as many detractors as it does proponents.

The legalization debate is one encompassing many different elements and opinions (factual or not). There are several recurring questions that always seem to arise during the discussion:

Though it may appear the debate has occurred relatively recently, questions such as these have been asked for decades.

The only contemporary change in the conversation is the shift from when will marijuana be legal to how will legalization impact society? Additionally, what are the benefits now that it has been legalized in most states?

Though the dynamics of the debate have changed, the one thing that can’t be questioned is marijuana’s long-standing history in the United States.

Dating back to the 1600s, Americans, with the blessing of the federal government, used hemp to produce clothing, rope, and sails.

In 1619, the state of Virginia passed legislation that required all farmers to grow hemp. The commodity was considered so valuable, it was legally allowed to be traded as legal tender in Maryland, Pennsylvania, and Virginia.

Production across the country flourished until the end of the Civil War. At that time, hemp was replaced by imported goods and materials manufactured domestically.

In the late 1800s, marijuana rose to prominence as an ingredient in several medicinal products sold to the general public by pharmacies. As it gained popularity, the Pure Food and Drug Act of 1906 mandated the labeling of any products containing cannabis which were sold over the counter.

Prejudice and hostility toward the new arrivals became intertwined with marijuana use. As a result, marijuana consumption was demonized. From the early 1900s through the 1920s, politicians ran on anti-drug campaigns. Rumors circulated that Mexican immigrants were giving marijuana to schoolchildren.

Also, at the time, immigrants and sailors from the West Indies smoked marijuana in port cities along the Gulf of Mexico. Publications in New Orleans associated the substance with African-Americans, prostitutes, and jazz musicians.

The vilification of cannabis peaked with the proliferation of stories about “The Marijuana Menace”. It was considered a drug that was used by social deviants, sub-human races, and the dregs of society.

The federal government deemed marijuana illegal in the late 1930s. Congressional hearings in 1937 resulted in the first federal restrictions on marijuana.  The Marihuana Tax of 1937 regulated the cultivation, importation, and/or distribution of marijuana.

Before the restrictions, it was a legal cross-border import.

It’s important to note that the restrictions in 1937 weren’t the only obstacles on the path toward marijuana legalization:

Fast forward a few decades and the cannabis industry begins to show signs it won’t be stopped even with federal constraints.

The Birth of the Cannabis Industry

Today, there are over 30 publications specifically targeted toward the cannabis industry. Many people are unaware of the godfather who started it all- High Times.

While today’s magazines are primarily online and just getting their baby teeth, old issues of High Times could once be found in the Library of Congress.

Issues from the 1970s showcased ads where kids could get a unique pipe (the predecessor of today’s bong) if they bought a frisbee. Other advertisements showed board games where kids could pretend to be marijuana dealers.

Unfortunately, the success of the magazine and paraphernalia marketed to kids created an enormous obstacle for decriminalizing marijuana in the 70s.

As 1980 was approaching,  a troublesome trend was reported. The daily or near-daily use of marijuana by high school seniors almost doubled between 1975 to 1978.

Almost 1 in 9 seniors were smoking marijuana daily. Kids just entering their teenage years were boasting how easy it was to buy on the street or from friends.

At the time, they saw paraphrenia marketed to kids and marijuana use in general as a gateway to other drug use.

Concerned parents across the nation created a movement that started in the mid-70s and peaked when President Reagan took office. The groups worked diligently to squash decriminalization bills on the state level. They also bolstered the anti-marijuana stance held by the federal government.

Once state-level bills were overturned, companies across the country that marketed paraphernalia to kids went out of business and quickly.

A product or service won’t survive in the marketplace if demand doesn’t exist.

The popularity of marijuana-related accessories in the 1970s was evidence of the country’s rising interest in the use of recreational marijuana.

At the time, the economy was also struggling. Lines for gasoline stretched for blocks. Inflation continued to rise. Not only were unemployment rates very high, but the demand for goods from the United States was stagnant.

Imaginative capitalists were looking for new ways to generate revenue.

A fledgling cannabis industry was born.

But because marijuana was still illegal, most of the industry’s revenue was created by ancillary products. Aspiring business owners whittled pieces of wood in their garages to make “hash pipes.” Large companies imported incense and other products that complemented marijuana purchases.

Not only were beaded curtains and other goods sold by bigger organizations, but this type of paraphernalia was also available at local 7-Elevens and record stores. It was a field that brought in over $200 million annually.

Now, the sale of cannabis and its related products is legal in many states. The field is so profitable, the capital generated could possibly surpass NFL revenue in 2020.

But none of this would have happened if not for the valiant efforts of a few pioneers in the cannabis industry.

Two Pioneers in the Cannabis Industry

As mentioned, the road to marijuana legalization was long and arduous.

One of the organizations at the forefront of the fight is The National Organization for the Reform of Marijuana Laws, also known as NORML.

NORML is a non-profit organization whose mission is initiating, supporting, and enforcing the fight for legalizing marijuana in the U.S.

Pioneer Keith Stroup founded NORML in 1970. Since then, the organization has had significant triumphs in the fight to win favorable legislation.

Stroup was the leader of the organization for 34 years.

A few victories of note include:

These milestones may have been reached without NORML, but there is no doubt the organization played an integral part in their acquisition.

Though the cannabis industry owes a great debt to Keith Stroup, other people have also contributed to the massive strides taken by the industry.

In 1971, a psychiatrist from Harvard Medical School wrote a book entitled, Marihuana Reconsidered. The book raised the ire of president Richard Nixon because it decimated the federal government’s case for maintaining the illegal status of cannabis.

Written by Lester Grinspoon, the book was immensely popular. His ivy league credentials made it difficult for critics to pan the work as hippie nonsense.

The White House wasn’t the only establishment that objected to the publication.

Grinspoon believed Harvard disapproved as well. He was denied promotion to full professor two times even though his illustrious career included dozens of books, a leadership role at Massachusetts Mental Health Center (among others) and encompassed innovative research on schizophrenia.

During his entire tenure at Harvard, Grinspoon was only able to reach the mantle of associate professor.

The esteemed academic institution never provided a reason. But friends of Grinspoon felt he was a victim of discrimination. It was believed that conservative faculty and leaders at the school frowned upon Grinspoon becoming a full professor and a possible representative of the university.

In his own words, Grinspoon recalls a dean telling him the committee responsible for promotions “hated” the book.

The irony is that, before becoming a faculty member of Harvard, Grinspoon was certain marijuana was an illicit drug destined to doom the youth. As he conducted his research about the dangers, he came to realize he had been “brainwashed.”

Even though his decision prevented him from attaining the status of a full professor, Dr.  Grinspoon’s book provided the foundation for cannabis legalization.

The legalization of marijuana still has its battles. The negative stigma associated with its use can be traced back as far as the 1930s. Fortunately, the fight is being won one state at a time.

Read the original Article on The Medical Cannabis Community