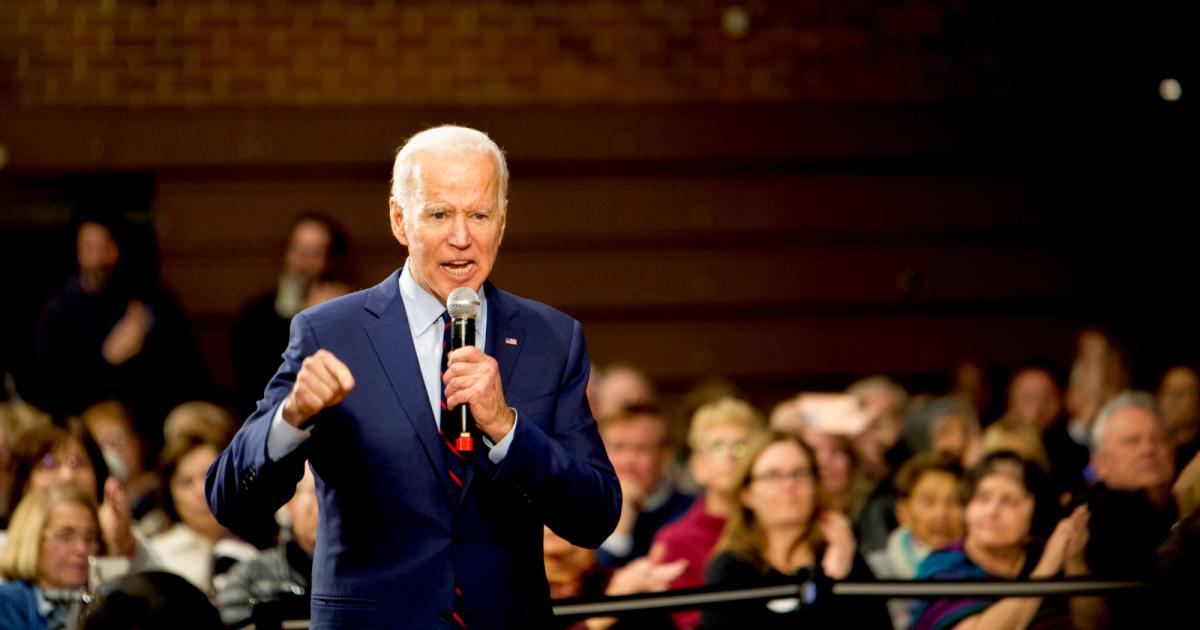 Cannabis legalization should be a no-brainer for Democratic presidential nominee Joe Biden.

As a standalone issue, cannabis legalization has widespread, bipartisan support. Over two-thirds of Americans favor legalization, and that support is intergenerational and spans across all political affiliations. Additionally, individuals aged 65 and over — a demographic that Biden polls well with — are the fastest growing category of cannabis consumers in the United States. In the broader political context, cannabis sits at the intersection of major contemporary issues Biden would face as president.

Cannabis is deeply intertwined with criminal justice reform and a key player in many local and state government economic recovery plans. The cannabis industry generates millions of dollars in tax revenue every year, supports hundreds of thousands of jobs, and provides numerous health benefits to patients and veterans alike.

But despite the numerous benefits, Biden stops just short of supporting adult-use legalization.

The Democratic Party and decriminalizing cannabis

Last month, the “Biden-Sanders Unity Task Force” submitted a set of policy recommendations to the Democratic National Committee's (DNC) platform committee ahead of the Democratic Convention in August. Within the 110-page document lies a small paragraph (page 9) on cannabis policy, located in a broader section dedicated to comprehensive criminal justice reform. The recommendations include rescheduling cannabis through executive action, decriminalization, automatic expungement for use and possession charges, federal medical legalization, and allowing states to make their own decision about adult-use cannabis.

A few weeks later, the DNC's platform committee rejected an amendment in a 50-106 vote that called on the Democratic party to support cannabis legalization as part of their 2020 policy platform. The committee opted instead to adopt a position that aligns with the Biden-Sanders recommendations, meaning that Biden faces no pressure from the Democratic Party to change his current position on cannabis.

Given that 78% of people who identify as Democrats support legalization, the Biden campaign and the DNC appear to be out of step with their base. Many are frustrated as to why, despite its legal status in 33 states, it's well-documented social, economic, and health benefits, and its widespread support, Biden and the Democratic Party won't endorse cannabis legalization in 2020.

So, if public opinion won't sway him, and the Democratic Party won't push him, what could it take to get Joe Biden to support adult-use legalization?

Biden's history on cannabis and the criminal justice system

Historically speaking, Biden has budged on cannabis. Quite a bit, actually. For decades, Biden was a vocal opponent of cannabis and a believer in the disproven gateway theory, a myth born of the Reefer Madness era that believes cannabis causes users to go on to use hard drugs. Biden fully embraced the tough-on-crime philosophy and has a long track record of supporting legislation that directly contributed to the War on Drugs.

“Every major crime bill since 1976 that's come out of this congress, every minor crime bill, has had the name of the Democratic senator from the state of Delaware, Joe Biden, on that bill.”

With his political career now under a microscope, the presidential hopeful has had to come to terms with his hand in contributing to the current state of mass incarceration and the perpetuation of racial inequities in the U.S. criminal justice system.

Among other things, Biden now supports expanding rehabilitation and social services, eliminating mandatory minimum sentences, abolishing the death penalty, and ending the federal government's use of private prisons. As for cannabis, he has come a long way. Even throughout his 2020 presidential campaign, Biden's position on cannabis continues to evolve.

While it doesn't appear likely, it's also not entirely unfathomable to think that Biden could change his tune on cannabis before the election or during his possible presidency. Here are a few scenarios in which Joe Biden could potentially support adult-use legalization:

A major barrier preventing Biden from going all-in on his support for cannabis legalization is a lack of research. Biden wants proof that cannabis use will not result in long-term physical or mental health issues. In an interview with the New York Times he said, “we should just study it and decriminalize it, but study it and find out. Get the medical community to come up with a final definitive answer as to whether or not it does cause [other problems].” Which begs the question, if presented with definitive research demonstrating cannabis does not pose a major public health concern, would he then support adult-use legalization?

The truth is, acquiring more research is not that simple — a fact that Biden is likely keenly aware of. By claiming he needs to see more research, Biden is kicking the can down the road on cannabis legalization while maintaining an appearance of open-minded pragmatism. There are over 29,000 published scientific papers on cannabis, 3,300 of which are dedicated to its medicinal use. There is, arguably, plenty of convincing research documenting the medical benefits of cannabis, however there are few clinical studies that actually involve the plant.

Because cannabis is classified as a Schedule I substance on the Controlled Substances Act, conducting research using the plant requires a lengthy review process and clearing a number of bureaucratic hurdles. It can take years to receive approval to begin research using cannabis.

Biden has indicated he will reschedule cannabis from a Schedule I substance to a lower schedule, but his policy plan does not specify whether he would remove other barriers to research. So long as receiving approval to conduct clinical studies is exceedingly difficult, it is unlikely the type of research it would take to get Biden to support adult-use legalization will come out any time soon.

Whoever Joe Biden selects as his running mate will undoubtedly play a significant role in shaping public policy and influencing the potential future president. During his own time as VP, Biden often received credit for forcing President Obama's hand on LGBTQ marriage by making a simple statement in support of the issue on Meet the Press. Perhaps Biden's vice president could employ a similar tactic to pressure him into supporting adult-use cannabis legalization.

The influence of former political rivals

During the primaries, Biden stood out as one of the only major candidates who did not support cannabis legalization — a point of contention during the debates that further solidified him as the moderate candidate. Rumored cabinet picks among his former opponents include Elizabeth Warren, Jay Inslee, Pete Buttigieg, Kamala Harris, Cory Booker, Andrew Yang, Julián Castro, and Amy Klobuchar, all vocal supporters of cannabis legalization. If given a spot on the transition team or the cabinet, perhaps it's possible that Biden's former political rivals could dust off their legalization plans and sway him on the matter.

However, keep in mind that even after months of deliberation, the Biden-Sanders Unity Task Force recommendations still fell short on legalization. The fact that Bernie Sanders — a candidate who vowed to legalize cannabis on day one if elected — was unable to push Biden's team on legalization lends skepticism to the level of influence other candidates could have on this particular issue.

What would happen if Biden won the presidency and somewhere down the road a cannabis legalization bill landed on his desk? For a bill to even get to that point would require a few key changes to the legislature, most notably in the Senate. The current Senate majority leader, Mitch McConnell, is vehemently opposed to cannabis legalization. The role of the Senate majority leader is to serve as a spokesperson for their party and decide what bills will be brought to the Senate floor for a vote.

While the House of Representatives is gearing up to vote on the MORE Act, a bill that would effectively legalize cannabis at the federal level, it's extremely unlikely it will be taken up in the Senate so long as Mitch McConnell is the majority leader. For a legalization bill to make it to the President's desk, a change in leadership in the Senate would be necessary. Even then, legislation passing in both chambers of the legislature would be no small feat.

But as to whether Biden would sign legislation that would legalize adult-use cannabis at the federal level, there is no clear answer. Biden has not provided any indication as to how he would vote in this particular situation. It's reasonable to assume he would vote alongside his party, as is typical of the president, but nothing is certain.

Biden's position on many issues, including healthcare, criminal justice reform, and cannabis, continues to evolve along with an ever-changing political landscape and the Democratic Party. It's worth noting that, although his position appears out of touch with voters, he would be the most progressive president ever on cannabis.

While incremental change is better than inaction, hopefully, Biden will budge on cannabis.

A Guide To Saving Money On Weed

This article was originally published on Weedmaps, and appears here with permission. Weed is expensive. There's no way around it.  read more

Why Jefferies Is Losing Its Tilray Buzz

India Globalization Capital, Inc. ("IGC" or the "Company") (NYSE:IGC) announced that it is enrolling participants suffering from mild to severe dementia due to Alzheimer's disease for its Phase 1 read more