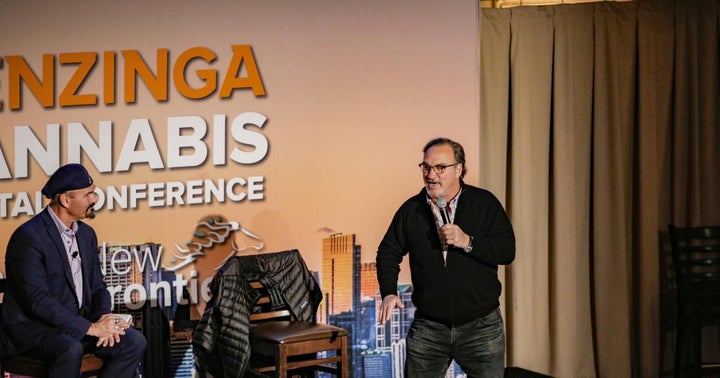 Actor Jim Belushi and CNBC's Jon Najarian closed day one of the Benzinga Cannabis Capital Conference in Chicago with a bang Tuesday.

The entertainer and founder of Oregon-based Belushi's Farm took the audience on a ride as he detailed his entrance into the space, as well as the emotional significance it holds for Belushi and his customers.

Offering up a healthy dose of business insights and comedic levity, Belushi and Najarian riffed on the entertainer’s history of cannabis use and how his passion for healing helped bring him into the industry.

Belushi showed a Belushi Farms sizzle reel that's being shopped as a potential TV series. The clip delved into Belushi as a person, the farm's staff and strains like Captain Jack, named for a pot dealer at the "Saturday Night Live" studios in the 1970s.

Captain Jack is one of the most popular strains produced on Belushi Farms.

Giving the plant the nickname “The Marriage Counselor,” Belushi said smoking it has resolved marital conflicts over things like dinner plans.

"I told that story … to 400 people, and within two months, all my Cherry Pie was sold out," Belushi told the crowd, drawing laughter.

Belushi: Pot Could Have Saved My Brother

While the presentation leaned toward comedy, Belushi also spoke about the importance of building a cannabis company with substance.

“Branding's got to be tied to something that people relate to; an emotion, a feeling, a context,” he said.

For Belushi, that emotion includes the death of his brother John from a heroin and cocaine overdose in 1982.

Jim recalled flying over coca fields in Colombia, wondering if the cocaine that killed his brother was grown in the fields he was passing over.

“Sh–, this is a cemetery,” he said of the coca fields.

"I believe my brother John would be alive today if he was a pothead."

John’s passing sent Jim on a path to healing, he said, adding that it has been achieved to a degree with the help of cannabis.

Since Belushi Farms launched, Belushi said he's learned of the impact of the products on customers.

He gave the example of a veteran who said he could not sleep or interact with his family without consuming the company's Black Diamond OG strain.

Belushi supports the efforts of celebrities like Snoop Dogg and Willie Nelson, but said he brings a different perspective to his own company.

"I'm a little different because I'm a grower. I'm not the party guy — I'm on a mission from God."