Bulls And Bud Of The Week: Dixie Brands And James Henry

Welcome to the first installment of “Bulls and Bud,” where we take a look at some of the most promising stocks and brands in the legal cannabis industry.

This news actually came not long after Dixie Brands announced an LOI with Khiron Life Sciences (OTC:KHRNF) that would get Dixie Brands’ products into the Latin America cannabis market as well. With Mexico on the cusp of legalization, this is a pretty big deal.

In addition to Michigan and Latin America, Dixie Brands already has solid footprints in California, Colorado, Maryland and Nevada.

It’s quite clear Dixie is getting very aggressive in terms of expanding its footprint, not just in the U.S. Over the course of 2019, expect to see Dixie Brands entering new markets while further bolstering its status of having the broadest portfolio of revenue-generating consumer-facing products in the market.

In honor of Black History Month, I decided to focus on a successful, black-owned cannabis business in the U.S. The downside to this is that there aren’t too many.

While we're starting to see more black-owned businesses in the cannabis industry, it’s still not enough to make up for nearly a century of a war on drugs that has ravaged black communities, imprisoned far too many black people and laid the groundwork for a level of social and economic oppression that represents the very antithesis of freedom and justice for all.

More social justice programs are starting to be implemented in states where cannabis is legal, but we still have a long way to go.

Despite a playing field that's anything but level, there are some black-owned cannabis business that are thriving. One I really like is James Henry.

James Henry is the brainchild of founders James Victor and John Alston, who developed what I believe to be one of the best disposable vape products on the market.

I’m not typically a fan of disposable vapes, as I find them to oftentimes be lacking in quality and attention to detail. James Henry, however, does not fall into this category.

I’m a huge fan of the Indica, not only for the experience, which is far better than I’ve had with other disposable vapes, but for the flavor, too.

If you’re looking for some kind of artificial berry flavor, James Henry is not for you. But if you appreciate quality terpene profiles that don’t overpower the experience, but instead, enhance it, then you’ll love James Henry.

It’s clear that the good folks over at James Henry put a lot of time and care into product development. Even the hardware is far superior to what you might find with other disposable vapes.

When it comes to what one should expect with a disposable vape, James Henry has definitely upped the ante. 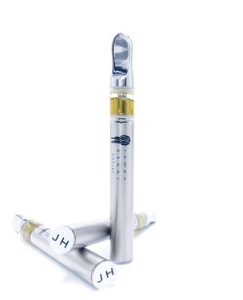