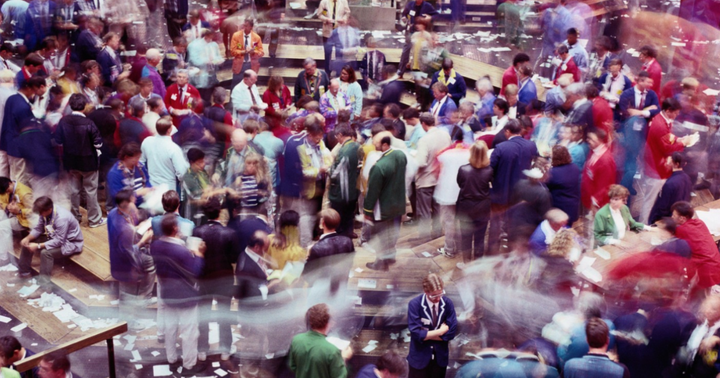 (Tuesday Market Open) After starting the week with a long bomb, the market looks ready for a lateral today. The same shares that led the forward rush on Monday—travel-related companies and technology firms—fell back a bit behind the line of scrimmage in pre-market trading.

This is exactly what we’ve been talking about. When there are no earnings, the market is going to go back and forth a lot on little pieces of news. One piece of news this morning was Atlanta Fed President Raphael Bostic telling the Financial Times he was seeing signs that the U.S. economy was “leveling off.” He also said the trajectory of the recovery could be “bumpier.”

The sentiment this morning seems to be that the rally yesterday might have been overdone to the upside considering the economy still faces all the same problems, so we’ll see where we go to the downside. A couple of things to monitor include whether crude can hold $40 a barrel and whether the Cboe Volatility Index (VIX) can stay below 30. If we do have a down day and crude stays above $40, that could be a positive sign.

Unlike yesterday when overseas markets roared and gave U.S. stocks a nice lift at the open, today saw most European and Asian stocks pull back a bit. Still, the Shanghai market managed a slightly higher close following its nearly 6% gain on Monday. Some analysts say China’s government helped spark the rally heard around the world yesterday by encouraging people to buy stocks.

A couple of things to consider watching today include three more Fed speakers and the monthly Job Openings and Labor Turnover Survey (JOLTS) for May. The comparison is 5.046 million in the previous month. This data is pretty backward-looking, however, so it’s unclear how much relevance investors will assign it.

Despite the early weakness, some things continue to point toward the positive sentiment. Crude remains above $40, the dollar index (which sometimes goes up at times of market anxiety) remains relatively low below 97, and gold is also a bit weaker this morning. The horsemen of risk seem to remain in the stable, for now.

Will Market Enjoy A Six-Pack?

Today we’ll see if the S&P 500 (SPX) can add to what’s now a five-day streak of higher finishes. It’s the longest winning streak since last December.

While you obviously can’t ignore that virus caseloads continue to rise and millions remain out of work, many people seem to be focusing more on the fact that the death rate isn’t rising as quickly and companies are making progress on treatments. The SPX is just 6% below the all-time high posted in February.

The only thing that went down yesterday was Utilities, though that might seem ironic if your air-conditioning costs are skyrocketing in this heatwave most of the country is suffering. Even Energy got a bit of a boost, and sectors like Consumer Discretionary, Communication Services (led by Amazon Inc (NASDAQ: AMZN) and Netflix Inc (NASDAQ:NFLX), and Financials all performed well.

Some help yesterday came from the ISM Services index for June, which registered a much higher than expected 57. Anything above 50 shows expansion. The 57 compared with 45.4 in May, making this the best monthly gain for the index in 23 years it’s existed. New orders, prices, and order backlogs all jumped. So did employment, though that one remained well under 50.

While the report did reflect businesses reopening in June, this month could be a test as some states are seeing stores close as caseloads rise. It’s unclear if this will be big enough to have an impact on numbers.

Even amid all the hoopla, reminders persist that things aren’t necessarily ready for the all-clear. The 10-year Treasury yield can’t seem to get above 0.7% and stay there, while gold continues to flirt with $1,800 an ounce and is up five of the last six days. It sounds like some investors might be hedging a bit in case stocks let them down.

Technically, the SPX appears to be enjoying a bit of a breakout (see chart below), which could be injecting itself into the positive mood on Wall Street. Remember that before its little June swoon, the SPX had ventured above 3200 for a while in late May and early June, hitting an intraday post-crisis high of 3233 exactly a month ago today. Things are approaching that level again, but first, they have to get past the psychological 3200 levels.

On the downside, there could be support near 3150 and below that at 3130. If things really fall out of bed, the 3000 level has held pretty firmly on several recent tests. That might be the so-called “Fed put” in action, meaning investors get hesitant to sell because they feel the Fed will come in and help bail out the market. That’s not officially the Fed’s job, though one could argue the Fed has basically been the backstop for many years.

Retail investors added to their stock market exposure in June, but not by a huge amount, according to the TD Ameritrade Investor Movement Index® (IMXSM).

The headline figure rose to 4.55 in June from 4.35 in May. That was a much slower climb than the hefty May gains. During June, investors tracked by IMX kept piling into the travel names, including Boeing Co (NYSE:BA), Norwegian Cruise Line Holdings LTD (NYSE:NCLH), and Carnival Corp (NYSE:CCL), using weakness to add to positions. The same appeared to go for American Airlines Group Inc (NASDAQ:AAL) and Southwest Airlines Co (NYSE:LUV).

When you dig a little deeper into who was buying what, you find out that millennials still believe in cruise lines and airlines—the “reopening trade”—at least according to IMX. That generation also gravitated toward Microsoft Corporation (NASDAQ:MSFT) and Coca-Cola Co (NYSE:KO).

Gilead Sciences Inc (NASDAQ:GILD) and Alibaba Group Holdings Ltd (NYSE:BABA) were among the names that were net-sold, according to the IMX. The selling tracked by the IMX mostly appeared to be a lot of profit-taking on stocks that had enjoyed big runs. Apple Inc (NASDAQ:AAPL) and NFLX also wound up on the net-sold list, though AAPL continues to be the most widely-held stock among the investors tracked. See more below on IMX.

The IMX is TD Ameritrade’s proprietary, behavior-based index, aggregating Main Street investor positions, and activity to measure what investors actually were doing and how they were positioned in the markets. 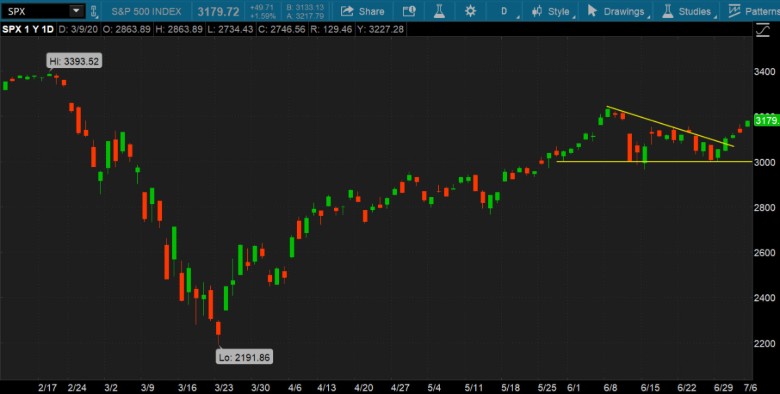 CHART OF THE DAY: LOOKING LIKE A TRIANGLE BREAKOUT. After coming off its March low, the S&P 500 Index (SPX–candlestick) has been in an uptrend although it stalled in what looked like a descending triangle pattern. But it seems to have broken out of that pattern. Could it be heading toward its all-time high or will it stall again? Data source: S&P Dow Jones Indices. Chart source: The thinkorswim® platform from TD Ameritrade. For illustrative purposes only. Past performance does not guarantee future results.

The P And The E: In an analyst note last week, a team from JPMorgan Chase & Co (NYSE:JPM) forecast $16 trillion in worldwide debt creation this year due to money creation and accommodative central bank policies. According to the analysts, “most of this liquidity will eventually be deployed into equities as the need for precautionary savings subsides over time.” In other words, central banks have been priming the pump to help boost confidence and shore up business (and personal) balance sheets. And as the crisis subsides, cash could continue its apparent shift from the sidelines to the stock market.

While that’s good for share prices in the short term, it’s important to remember that over the long term, earnings drive valuation. With the Nasdaq 100 Index (NDX) surging to new highs, and the S&P 500 Index (SPX) in hot pursuit—despite the coronavirus’ direct hit to commercial activity—P/E ratios have expanded in recent weeks. According to The Wall Street Journal, as of last Thursday, the P/E (12 months trailing) for the NDX is 31.95 (vs. 24.5 a year ago) and the SPX’s is 27.4 (vs. 22.8 a year ago). These are well above long-term averages. As we begin another earnings season, it seems—from a P/E ratio standpoint—the market is pricing in a “V-shaped” recovery.

Millennials And The Markets: The IMX data for June showed Millennials were generally a little more stock-oriented than average, with the Millennial IMX rising 8.5% in June compared with 4% for the overall IMX. From what we can see, millennials seem to be emboldened by the Fed’s backstop. However, some of the profit-taking in stocks that had big gains could reflect less experienced investors exiting winning positions perhaps a bit too soon.

Generally, what we saw in June was a little less of the incredible optimism that held through most of May. Instead, optimism waxed and waned as state economies took steps to reopen and spikes in cases of COVID-19 rippled across the country, contributing to continued volatility in the markets. Still, the net-buys seen in the travel and hospitality sectors might be a sign that many retail investors used the uptick in economic activity to take advantage of the ripple effect they see coming to these sectors.

Oh, Rats! There’s a famous cartoon character known for standing by the mailbox each day hoping for a Valentine’s card. If that describes you and your eagerness for another government stimulus check, you might ultimately find yourself saying, “Good grief!” Chances of another round of government stimulus could be on pause for a bit as Congress just began a two-week recess. The Fed has done an incredible amount of heavy lifting since the crisis began, and so did Congress early on. Now, with the fiscal stimulus winding down, the market might be anticipating a new round. Failure of Congress to come up with one has the potential to sap some investor enthusiasm and hurt consumer sentiment. Keep in mind that some of the decent data lately could reflect the spring stimulus.

However, President Trump has signaled some willingness for another batch of stimulus checks, and Congress doesn’t stop working just because U.S. senators and representatives aren’t down the block from the White House for a bit. It seems likely we could hear more developments on a possible package before Congress gets back. Every week brings the election closer, and neither party likely enjoys the prospect of facing angry voters. Maybe the government will connect with the football before it gets pulled away, but we’ll have to wait and see.

'A Clear Break With Prevailing Policy': Stock Market Update For The Week Ahead

The Last Week In A Nutshell What Happened: Last week ended positive, with broad gains in all S&P 500 sectors. read more

'Psychological Milestone': Stock Market Update For The Week Ahead

The Last Week In A Nutshell read more

'Further Gains Ahead': Stock Market Update For The Week Ahead

The Past Week, In A Nutshell What Happened: Last week ended negative alongside mixed messaging on stimulus. read more

'Make Or Break': Stock Market Update For The Week Ahead

The Last Week, In A Nutshell What Happened: Stocks closed the week lower on an escalation of U.S. and China tensions, mixed reactions to earnings results, and delays in stimulus talks. read more