With the cannabis sector heating up recently, we invited "420 Investor" Alan Brochstein to guest on Thursday's PreMarket Prep show. One of the issues discussed, GW Pharmaceutical PLC GWPH, is the PreMarket Prep Stock of the Day.

The Company: GW Pharmaceuticals PLC is a biopharmaceutical company focused on discovering, developing and commercializing novel therapeutics from its proprietary cannabinoid product platform in a broad range of disease areas.

The company's lead product is Epidiolex, a liquid formulation of pure plant-derived cannabidiol used for the treatment of a number of rare childhood-onset epilepsy disorders.

The company also develops and markets Sativex, an oromucosal spray for the treatment of spasticity due to multiple sclerosis.

GW Pharma Price Action Since May 2019: While many issues in the sector peaked in the fall of 2018, GW Pharmaceuticals did not make its all-time high until May 2019 at $196.

It trended lower for the remainder of the year and had lost nearly half its value when it ended 2019 at $104.46.

It was more the malaise in the cannabis sector than the company’s earnings that accounted for the poor performance.

Then Came COVID-19: GW Pharma rebounded in early 2020 and was able to reach $132.50 in February before it got smoked along with the broad market.

It bottomed in March along with the broad market at $67.98 and began to rebound.

Until Tuesday, the rebound high from the March low was made in July at $141.98.

Limited Coverage From Wall Street Firms: Only two ratings changes have been made on the issue from U.S. brokerage firms since May 2019, although several have a Buy rating.

On May 7, Oppenheimer upgraded the issue from Perform to Outperform.

The other ratings change came from Stifel on July 15, when it downgraded the issue from Buy to Hold and lowered the price target from $150 to $140.

The Street-high price target is at Needham, which initiated the issue with a Buy rating Oct. 21. The firm has a $200 price target.

Brochstein's Take On GW Pharma: “I love it, with a price target of $212,” Brochstein said of GW Pharma.

As the author of this article discussed the potential breakout on the monthly chart, Brochstein said: “the best investors know how to integrate the technical side with the fundamental side.”

His two final points were that the company has other drugs in the pipeline that may soon receive FDA approval — and he identified the company a possible takeover target. 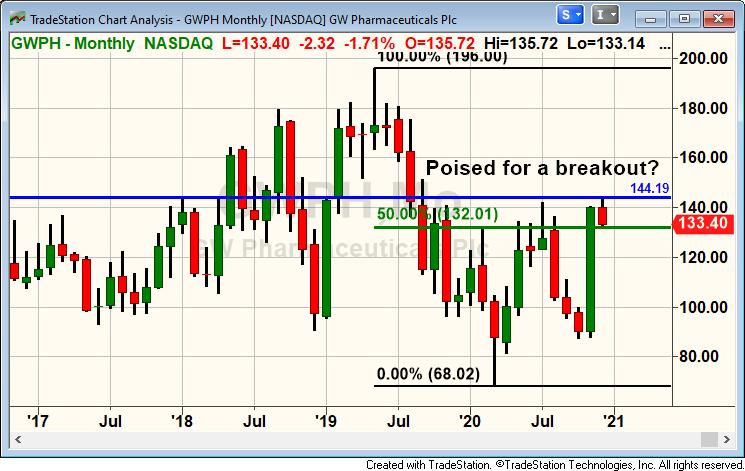 The full talk with Brochstein can be found here, with the GW Pharma discussion starting at the 49:55 mark.