Earth Science Tech Inc (OTC:ETST) is a micro-cap biotechnology company focused on the delivery of nutraceuticals, bioceuticals and dietary supplements. Havind said this, and given that its flagship product at the moment is its High Grade Hemp CBD (Cannabidiol) Oil, the company can be considered a cannabis business, though.

As Benzinga readers know by now, one of our top sources for investments in the cannabis industry is Alan Brochstein. The founding partner at New Cannabis Ventures and founder at 420 Investor periodically updates us on which marijuana stocks we should keep an eye on and which ones we should avoid.

In recent tweets, Brochstein mentioned a few stocks in the marijuana space that seem overvalued. Among them were mCig Inc (OTC:MCIG), a company we looked into a few days ago, and Earth Science Tech, which will be the focus of this piece.

On Wednesday afternoon, Brochstein tweeted, “Be careful with $ETST — insanely overvalued after being run up by traders.”

Intrigued by this statement, we reached out to the expert and asked for an explanation.

Earth Science Tech is controlled by "Majorca Group, Inc. (‘Majorca’), a corporation incorporated under the laws of the Marshall Islands,” he explained. It should be noted that the Marshall Islands are known for the extensive benefits it offers foreign companies, including statutory tax exemptions for LLCs, extremely low capital share requirements, high confidentiality, and no filing obligations.

Majorca Group owns 5.2 million preferred shares (which represent 52 million voting shares) and 25 million common shares, Brochstein continued. “I have never been able to learn much about this controlling entity, but it is a yellow flag,” he pointed out.

Moving on to Earth Science Tech per se, the expert explicated that the company has 40.47 million shares, plus the Preferred shares that convert 1:1, giving it diluted shares of 45.67 million. “At a price near $3.00, the market cap is about $135 million, which is crazy,” he voiced. 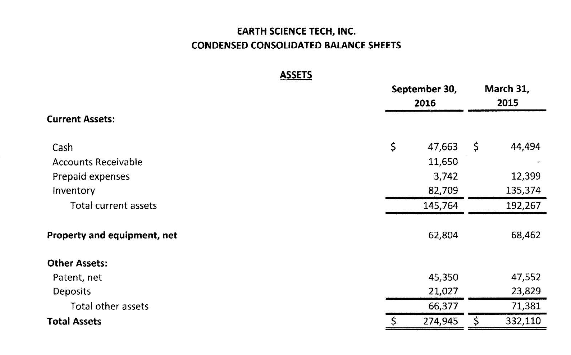 TSLA: Elon Musk Comes Out Against Biden's Infrastructure Bill, Says China Needs To Realize Its Role As The 'Biggest Kid On The Block' As It Races Ahead Of US

AMC, SONY: AMC Giving Away Free NFTs: Here's How You Can Get One

$DOGE, $SHIB, TSLA: This Coin Named After Elon Musk's Pet 'Floki' Is Up 1094% Today Even As Dogecoin, Shiba Inu Fall

$DOGE: Why Is Dogecoin On The Rise Today?