The latest numbers in the asset-backed securities (ABS) market are drawing some unfavorable comparisons to derivative market dynamics prior to the Financial Crisis. A new report by Wells Fargo indicates that, while the overall ABS market has cooled so far in 2016, subprime auto loan ABS origination has been on the rise.

In addition, the percentage of the total amount of auto loans going to borrowers with credit scores below 620 is currently at its highest level since before the Financial Crisis. 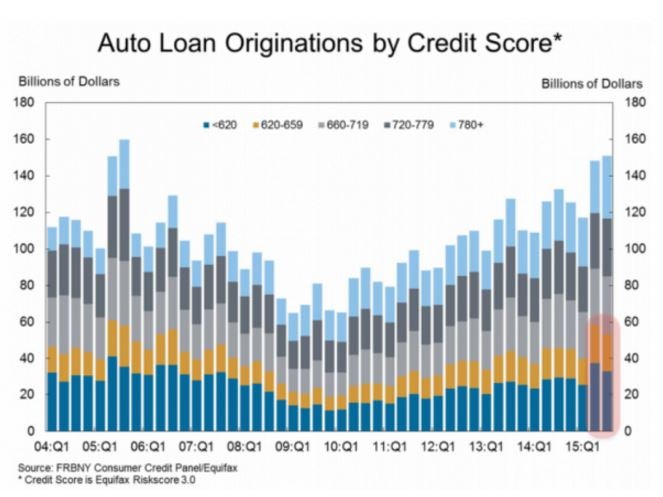 Much like the MBSs constructed during the mortgage bubble, subprime auto loan-backed securities are designed to withstand a certain level of defaults. However, the market runs into trouble when default rates exceed the estimated levels. Bloomberg reports that subprime auto default rates have also reached their highest level since 2010, climbing a staggering 1.0% month-over-month in January to 12.3%.

Not only are the overall numbers trending in the wrong direction, there is anecdotal evidence of loosening lending standards happening in the auto lending space that are nearly identical to the dynamics of the subprime mortgage bubble. Auto lender Skopos Financial recently packaged $154 million in auto loans to be sold to investors.

Incredibly, more than 84 percent of these loans were made to borrowers with credit scores under 600 or no credit scores at all. Despite the extremely low credit quality of the borrowers, the ABSs they comprised were expected to be rated as high as AA when marketed to investors by Citigroup.

Unfortunately for lenders, the market of credit-worthy borrowers is a set size. That means that at some point, loan growth will require lowering lending standards. The latest statistics seem to indicate that the auto loan market has already taken that dangerous turn. Parallels to the mortgage crisis have not escaped the attention of U.S. comptroller of the Currency Thomas Curry, who says it “reminds me of what happened in mortgage-backed securities in the run-up to the crisis.”

The U.S. auto industry has been riding a record-setting sales wave in the past couple of years. However, if sales have been fueled in large part by subprime lending, the house of cards could soon come crashing down.

If it does, Americans must hope that regulators and leading financial institutions have learned some important lessons from the mortgage crisis and are better prepared to weather the coming storm without significant systemic risk.

Dissecting The Economy Trump Is Inheriting

Pro: Markets Should Take A Step Back