Greece ETF Tries To Get Going

The lone U.S.-listed ETF dedicated to Greek stocks plunged 31.2 percent last year, or more than the double the loss of the MSCI Emerging Markets Index.

Still residing more than 36 percent below its 52-week and 13.67 percent below its 200-day moving average, GREK is attempting to rebound this year. The Greece ETF is higher by 6.23 percent year-to-date and some data points suggest traders are revisiting the fund.

“Earlier this week we noted call buying in infrequently traded GREK options involving the March 7 strikes more than 10,000 times versus scant open interest in the line,” said Paul Weisbruch, head of ETF sales and trading at Dallas-based Esposito Securities, in a recent note.

The $240.87 million GREK follows the MSCI All Greece Select 25/50 Index. GREK, which is just over seven years, reflects the small size of the Greek equity market with just 34 holdings. Additionally, the fund has sector-level concentration risk as two sectors – energy and financial services – combine for over 42 percent of GREK's weight.

“There is a substantial overweight across the first several holdings where more than 38% of the basket is spread across only the top four names,” said Weisbruch.

Greece last week sold $2.90 billion in sovereign bonds, the country's first bond issue following various bailout packages. Those bonds yield 3.6 percent. However, the country is also planning an 11 percent boost to its minimum wage, a sign that its days of austerity are officially over.

GREK could continue to garner the attention of tactical investors this year if Greece makes good on expectations of steady economic growth. The government there is forecasting GDP growth of 2.5 percent for 2019.

“Greece’s economy will expand by around 2 percent in 2019, the influential Greek IOBE think tank predicted on Tuesday, slightly below a previous forecast of 2.4 percent,” according to Reuters.

This New Bond ETF Is Cheap 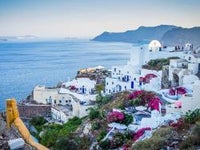 Inside The Greece ETF's Epic 2019 Rally

The Greece ETF Continues To Impress

Reasons To Cheer For The Greece ETF