A Standout Among Leveraged EM ETFs

The MSCI Emerging Markets Index lost 2.16 percent Tuesday. That was just another day at the office for the downtrodden benchmark, which is now sporting a year-to-date loss of 16.21 percent.

A slew of emerging markets exchange traded funds, both single-country and diversified funds, reside at or near 52-week or all-time lows, but one market is showing signs of life: India.

Yes, the MSCI India Index lost 1.79 percent yesterday, but that benchmark is up nearly 8 percent this month, which has trimmed its year-to-date loss to nearly 500 basis points less than the MSCI Emerging Markets Index.

The MSCI India Index is home to nearly 80 stocks, about 40 percent of which are financial services or technology names. The energy and consumer staples sectors combine for over a quarter of the benchmark's weight.

Even with its Tuesday decline, INDL is the best-performing leveraged bullish in Direxion's lineup on a month-to-date basis, according to issuer data. Still, there are some risks to consider with INDL and traditional, plain vanilla ETFs. Those risks include the massive amount of capital that has flowed into Indian equities since the end of the financial crisis.

“Indian stocks have been the biggest emerging-Asian beneficiaries of the wave of liquidity that swept over world markets in the wake of the global financial crisis, according to data compiled by Bloomberg. That may also make them the most vulnerable, now that the waters are receding,” according to Bloomberg.

Traders are displaying modest enthusiasm for INDL. Over the past month, the leveraged India ETF is averaging daily inflows of almost $25,000, according to Direxion data. That may not sound like sound much (it's not), but those inflows compare favorably with some other leveraged emerging markets ETFs.

Time For This Retail ETF 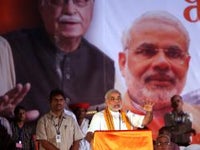 Traders Are Piling Into This India ETF