Japan: Land Of The Rising ETFs?

However, some market observers believe Japanese stocks could be poised to outperform riskier emerging markets fare. While Japanese stocks have been decent performers this year, a lid has been kept on any rallies because the yen has traded slightly higher against the dollar. That situation is showing signs of reversing: The yen is lower by 2.4 percent against the greenback this month.

That could lead to increased upside for the iShares Currency Hedged MSCI Japan ETF (NYSEARCA: HEWJ), the currency hedged version of EWJ. HEWJ, which tracks the MSCI Japan 100% Hedged to USD Index, is up 11.7 percent this year.

Like it or not, when investors venture outside the U.S., they take on currency risk. This year, the weak dollar, as noted above, has weighed on Japanese stocks. Conversely, emerging markets investors are being rewarded by the weak greenback.

“Thus far, 2017 has been defined by a sharp decline in the dollar. From the January peak to the September low, the U.S. Dollar Index lost approximately 12 percent,” said BlackRock. “However, selling dollars has become a bit too popular and the greenback has started to stabilize. A stable or appreciating dollar would likely prove a modest headwind for EM equities and a tailwind for Japanese stocks.”

EWJ and HEWJ allocate about 41 percent of their combined weights to industrial and consumer discretionary stocks, meaning these ETFs are highly levered to Japan's export story. In turn, that makes these funds levered to price action in the dollar/yen currency pair.

While U.S. stocks are among the priciest in the developed world, the opposite is true of Japan. The world's third-largest economy is home to some of the most attractively valued stocks in the world.

New Addition For This ETF. 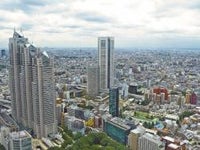