Benzinga had a chance to speak with Frank Holmes, CEO and Chief Investment Officer of U.S. Global Investors, about the new ETF.

The JETS ETF is comprised of four tiers of airline stocks.

The top tier will make up nearly half of the ETF’s portfolio and will consist of an equal weighting of the top four domestic U.S. airline stocks based on market cap and load factor. For the foreseeable future, this tier of holdings will likely consist of Delta Air Lines, Inc. (NYSE: DAL), United Continental Holdings Inc (NYSE: UAL), American Airlines Group (NASDAQ: AAL) and Southwest Airlines Co (NYSE: LUV).

The second tier of holdings will consist of 4 percent stakes in the next five largest U.S. domestic airlines. Tier three will include 3 percent allocations to the four highest-ranked remaining U.S. airline companies based on cash flow, sales growth, gross margin and sales yield.

The bottom tier will consist of 1 percent stakes in the top 20 international airline industry companies based on similar metrics used for tier three.

Fundamentals in the airline industry have been improving for quite some time, but with share prices of the “Big 4” already up more than 80 percent in the past two years, Benzinga asked Frank Holmes if there is upside remaining for the industry. 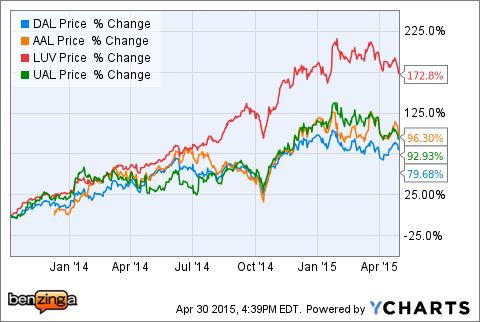 This Cycle Is Different

Holmes told Benzinga that he believes the current airline industry cycle is different from previous cycles.

“What there airlines have been doing, unlike previous cycles, is increasing their dividends, buying back their stock, and paying down their debts. When I look at the numbers from the first quarter, the free cash flow yield is up 500 percent from a year ago.”

According to a press release by U.S. Global, JETS is a smart beta, passively managed fund with an expense ratio of 0.60 percent.

Bulls Bought The Dip In American Airlines And United Airlines

With the vaccine rollout ramping up, customers are returning to the air to travel. Airline stocks were beat down during the course of the pandemic and have yet to return to the skies. read more

By Ship, Plane and Rocket: 3 Bullish Stocks For Technical Traders Going Into The Week