We woke up to some hope around a possible new U.S. relief package and European strength, and then saw weekly jobless claims come in above expectations. Stocks gave up some of their initial futures market gains after the depressing data.

New claims came in just above 1.4 million, up from 1.3 million the prior week and above analysts’ consensus of 1.28 million. Obviously, this is the opposite direction investors had been hoping for, and it means more tough times for many workers. The initial claims figure had been holding relatively steady near 1.3 million for a while, which is terrible from a historic perspective but at least it wasn’t going up. Now the question is whether this is a one-week blip or something more treacherous.

Some of the early optimism before the claims report likely reflected yesterday’s developments, including news of a coronavirus vaccine deal between the U.S. government and Pfizer Inc. PFE and BioNTech SE BNTX and apparent progress on U.S. stimulus negotiations.

There’s a lot of hope for another relief package, because any time the government sends new money in, it can help. There’s still a tightrope to walk because the deadline is getting close and the two parties seem to have a lot of space between them. This jobless data today might light a fire under Congress to hurry up the process, but you never really know.

The spotlight could shine on Tech again after the close as Intel Corporation INTC reports following a solid performance earlier in the week from Texas Instruments Incorporated TXN. The chip sector continues to roll up gains without much pause.

On the less shiny side of the coin, airlines keep suffering. Southwest Airlines Co. LUV reported a $915 million quarterly loss early Thursday and shares fell 1% in pre-market trading. The thing that’s worrisome is hearing LUV say demand has dropped in recent weeks. If you think back a few months ago, now was the time many had hoped airlines might be starting to recover. The new state-level quarantines could be getting in the way of some people’s summer vacation plans.

Other major earnings reports this morning include AT&T Inc. T, which topped analysts’ estimates and got a small pre-market boost, and Twitter, Inc. TWTR, which rose sharply as Monetizable daily active users (mDAUs) rose more than analysts had expected. The daily user base rise was incredible, stronger than anyone had expected. Revenue did fall, however, and like Facebook, Inc. FB, TWTR could continue to face a challenge on revenue from advertising.

You have to look overseas for one of today’s big earnings winners. Unilever shares surged nearly 9% after reporting profit growth in the first half. Apparently people were stocking up on ice cream and soap as the pandemic gripped consumers.

Four on the Floor as Tesla Profits Again

TSLA achieved kind of a landmark with earnings late Wednesday. It was the fourth consecutive quarter of profitability on a GAAP basis, which means it can now be considered for inclusion on the S&P 500 Index (SPX), CNBC noted.

That’s important for a simple reason. If TSLA gets into the SPX, a lot of index funds would have to buy shares so their holdings match the list of names in the index. That’s one reason some analysts have cited for TSLA’s huge run over the last few months.

TSLA shares are up 3% in pre-market trading as the company reported adjusted earnings of $2.18 and revenue of $6.04 billion, far outpacing the Wall Street consensus for a loss of $0.11 and revenue of $5.23 billion.

How much more runway do its shares have now that the positive news is out? Many analysts have said shares were overbought going into earnings, and now there’s a chance we could see some “buy the rumor, sell the fact” trading.

There wasn’t necessarily the same type of celebration over at MSFT headquarters up the coast from TSLA on Wednesday afternoon. Shares fell 1.6% in pre-market trading after MSFT came in a little bit slow on Azure cloud growth despite strong overall revenue.

There’s sometimes a knee-jerk reaction in the market to MSFT earnings lately, because many people look so closely at Azure. This single-minded focus might have put pressure on MSFT after earnings, because Azure growth of 47% in the company’s fiscal Q4 slipped from 59% sequentially and 64% year-over-year. Analysts looking at the post-market losses also said there was some disappointment around the company’s margins, The Wall Street Journal noted.

What investors should remember is that Azure might be running into the law of large numbers, which say the faster you grow, the tougher the comparisons get over time. Meanwhile, MSFT’s broader intelligent-cloud segment (which includes Azure), posted revenue of $13.37 billion, up 17% from a year earlier. Also, MSFT blew past analysts’ average earnings per share and revenue estimates.

The law of large numbers might also be true for MSFT’s stock price, which, like many others in the Tech sector, is outpacing the broader market this year by leaps and bounds. If MSFT shares stay under pressure today despite the earnings beat, that could be a lesson ahead of earnings from Apple, Inc AAPL, Facebook, Alphabet, Inc. GOOGL GOOG, and Amazon.com, Inc. AMZN in the coming days. All of these Tech or partially-Tech names have gotten way ahead of the SPX, and there are signs of investors beginning to rotate into lower-valued sectors.

That was evident, to some extent, in broader trading Wednesday before the big kahunas reported. Though Financials and Energy looked weak as those two sectors dealt with low interest rates and a slowdown in crude gains, strength showed up in some of the so-called “defensive” and cyclical sectors.

To build on what we said yesterday, Technology—once thought of as a growth sector that could get thumped in a bad economy—has kind of morphed into what many investors see as a “safe haven.”

While no investment is truly safe, what’s happened is that many investors want to go somewhere where they think a stock can still do well during a shutdown, and so far, that’s been Technology. Tech companies—in particular mature businesses like Microsoft, Apple, and Alphabet—might look more stable during a shock like the pandemic lockdown. Tech businesses have also been able to adapt to the new normal more quickly, as CNN noted yesterday, as certain products, like cloud services, did well during the lockdown and won’t go away in a recovery.

The other factor maybe helping Tech is that some stocks people used to embrace during an economic breakdown, like the traditional Consumer Staples, haven’t been able to deal with the pandemic as well as they did with past problems. Think about it. The 2008 financial crisis and recession were no picnic, but people still went to baseball games and bought soft drinks at the ballpark made by consumer product giants like The Coca-Cola Co KO and PepsiCo Inc. PEP. Lots of beer, too, for that matter. Things are different this time as the baseball season gets underway (finally) with no “meat in the seats,” the expression Hall of Fame slugger Reggie Jackson once used in reference to fans.

Yesterday we noted that the U.S. Dollar Index ($DXY) was approaching key technical support at 95. Well, on Wednesday it fell below that, declining 0.2% to 94.95. Gold futures increased 1.1% to $1864.30 an ounce and remain at nine-year highs. We already mentioned low yields. It feels like a broken record to say it again that caution is easy to find. 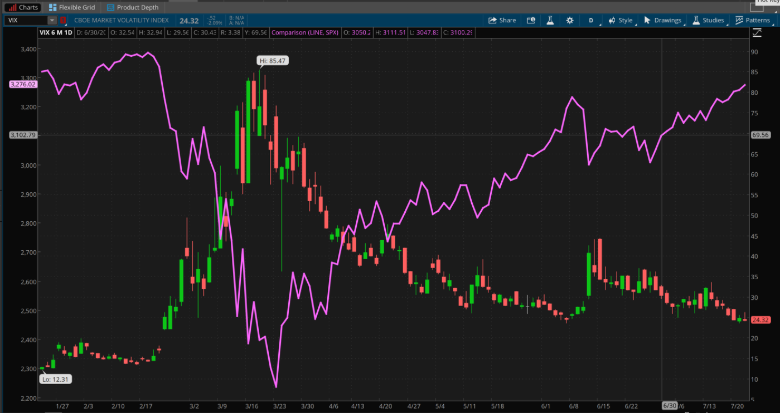 CHART OF THE DAY: AS WE WERE SAYING...Back when the pandemic first hit Wall Street in late February, the S&P 500 Index (SPX—purple line) and the Cboe Volatility Index (VIX—candlestick) were near 3300 and below 20, respectively, as this six-month chart shows. They went completely opposite ways after that, but now are quickly approaching levels last seen back then. The VIX is now below 25 and the SPX is above 3200. Can they make it back to where they were in the near-term, or is another stretch of volatility and falling stocks ahead? Data Sources: S&P Dow Jones Indices, Cboe Global Markets. Chart source: The thinkorswim® platform from TD Ameritrade. For illustrative purposes only. Past performance does not guarantee future results.

Nasdaq Beats 42-Year Old Streak: When you glance at Wednesday’s gain of less than a quarter of a percent for the Nasdaq (COMP), it doesn’t seem like much compared with, say, the 2% gain Monday. However, it does have some symbolism, because it’s now gone a record 48 trading days without consecutive losses. The longest previous stretch ended May 9, 1978, when disco ruled the pop charts, Reggie hit homers for the Yankees, and Marshall Field’s was a publicly-traded stock. That just reinforces the current strength of many Information Technology stocks, and how people are trading them a bit differently in some respects than they used to, as noted above.

Do It Yourself: It’s a bit anecdotal, but The New York Times ran a real estate article last weekend that might have ramifications for the home-building and housing industries. In a nutshell, the article focused on families leaving cities for the suburbs during this pandemic (something already written about a lot), but also mentioned how many new suburbanites are buying “fixer up” homes so they can get out to the ’burbs without spending so much money on well-preserved or new homes. If more people are buying these imperfect places, the thing to watch, potentially, is a bit down the road when home project stores like Home Depot Inc. HD and Lowe’s Companies Inc. LOW report. More people fixing up old homes could help their bottom lines.

Why Diversification Matters: As you watch Tech thrive, remember that several stocks, including AAPL, MSFT, and the other FAANGs, make up a huge valuation percentage of the SPX. That means index funds have to keep buying shares of these firms to match the valuation of the indices. That provides a second tailwind at times that arguably gives them an advantage over many less-highly valued stocks.

The downside is that any major decline in the FAANGs and MSFT would probably take a big bite out of the SPX, even though we’re just talking a handful of stocks. That’s why diversification remains important as an investor, so consider double-checking your portfolio and making sure your market exposure isn’t too dependent on the fortunes of only a small number of investments. Having an index fund is supposed to give you wide exposure, but these days when five stocks compose about 20% of the SPX, it’s not so elementary any more.