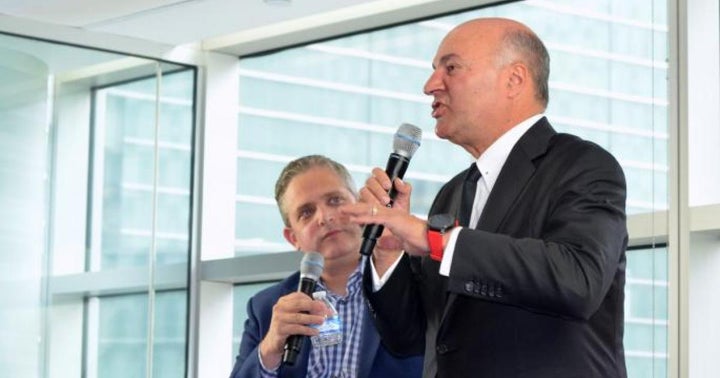 WallStreetBets: Raznick discussed the crazy trading action in GameStop Corp. (NYSE:GME) and Benzinga’s coverage of the surreal story behind the volatility on its live YouTube channel.

“Obviously the WallStreetBetters were behind this for a while, but the day Andrew Left from Citron Research was going public about [his short thesis], his Twitter video wasn’t working. He came live on our show when we had 600 viewers on our show. Within 8 minutes, the WallStreetBets guys showed up. We had 13,000 to 15,000 people in there going crazy,” Raznick said.

Within an hour-and-a-half of Left's Jan. 21 Benzinga interview, GameStop shares had skyrocketed from $41 to $80.

“They were calling me a boomer because I didn’t own the stock, and they were threatening if I didn’t buy the stock they were going to thumbs down, unsubscribe. I basically bought 100 shares live on the show because I’d never seen anything like it.”

O’Leary said he doesn’t believe there will ultimately be much regulatory fallout from the GameStop fiasco.

“The market actually performed quite well. Short squeezes have happened in the past, they’re going to happen in the future,” the "Shark Tank" judge said.

“The consensus is people are tired of being home and they’re going to be going out and taking action, not now but within the next couple of months. The perception has changed in the last month-and-a-half, I would say.”

O’Leary said the vaccination rollout may not go as smoothly as many are anticipating.

“What I think happens over the next 90 days is that we hit 66% with the vaccinations and we hit a brick wall. I think the rest aren’t going to do it, and as a result we’re going to be getting the COVID flu every year, slightly more deadly flu,” he said.

O'Leary said he and other professionals may never again be comfortable getting on a crowded elevator in December, which may be bad news for commercial real estate in the long-term.

Government Stimulus: Raznick said unprecedented government stimulus has been good for Benzinga’s business, but it’s also scary how many younger Americans appear to be treating their stimulus checks carelessly.

“It is a little concerning with rates going up right now that the mortgage market could get hurt. Is inflation going to spike up?” Raznick said.

In the short-term, Raznick said the government stimulus has been a major boon for stocks like Tesla Inc. (NASDAQ:TSLA) because the market is anticipating many Americans will use their checks to put deposits on cars.

O’Leary said the government needs to cut off its paycheck protection program at this point.

“There are businesses that are going to go out of business no matter how many rounds of funding we give them, so they shouldn’t be funded,” he said.

Raznick said the appetite for crypto content from Benzinga’s audience is staggering.

“The severe FOMO that happens in this world has happened in crypto,” Raznick said.

“It’s another asset base and you can diversify and be there, but you have to be careful.”

He urged crypto investors to remember the deep pullbacks in Bitcoin prices that occurred in 2018 and at other points in the past.

“People have to know it’s not as secure as putting money in a checking or savings account,” Raznick said.

O’Leary said he is up big on small investments he made in Bitcoin and Ethereum (Crypto: ETH) back in 2017.

The current crypto craze is similar to the California gold rush in the 1800s in that the most savvy investors were selling mining supplies rather than buying gold, he said.

“I’m going to invest in crypto infrastructure and put together a bunch of investments in that space and own the coin. But the point is I like to have less volatility but I want to capture the growth.”

Jason Raznick, the founder and CEO of Benzinga, on Thursday interviewed Kevin O'Leary on the "Raz Report." Among the topics discussed with the "Shark Tank" star and co-founder of O'Shares ETFs were read more