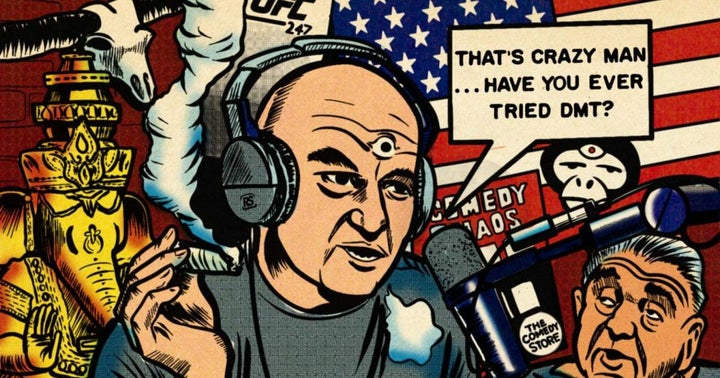 This article by Niki Perlberg was originally published on Reality Sandwich, and appears here with permission.

WHO IS JOE ROGAN?

Joe Rogan has been a pivotal trailblazer in the pursuit of dedemonizing psychedelics. In fact, many of the younger readers will know Joe Rogan for his famous podcast, The Joe Rogan Experience. However, Rogan has had a very full and colorful career prior to his podcasting days. For example, some of his many hats have included those of actor, comedian, and mixed martial arts color commentator.

A JACK OF ALL TRADES

Rogan kick-started his career in entertainment through stand-up comedy. He participated in his first open mic at Stitches Comedy Club in August of 1988. This inspiration for this performance was comedian Richard Pryor’s film Live on the Sunset Strip. Just as all artists do in the beginning, Rogan also held many other odd jobs in order to pursue his comedy career. Some of these jobs included teaching martial arts, delivering newspapers, driving a limousine, construction work, and completing duties for a private investigator.

In 1990, talent manager Jeff Sussman scouted Rogan, and after that Rogan was able to focus on his entertainment career full-time. Nearly four years into his journey, he relocated to Los Angeles and began landing roles and making deals with big networks.

Rogan then quickly moved his way through the entertainment industry, landing roles with Fox, MTV, NBC, and Disney. His first hired act was for a nine-episode sitcom entitled Hardball. Rogan played Frank Valente, the star of a professional baseball team, who was more often than not a douche. Rogan claims this particular hiring process was odd. The vice president of Walt Disney TV in those days told the young comedian, “If you can lie, you can act, and if you can lie to crazy girlfriends, you can act under pressure.” Condolences to those who are in a relationship with an actor.

Subsequently, Rogan was able to secure a multitude of roles. His most popular ones include Joe Garrelli in the NBC sitcom NewsRadio, Chris in Just Shoot Me, Richie in Venus and Vegas, and Gale in ZooKeeper.

But the majority of the other roles in Rogan’s career were him, simply being him. As a matter of fact, the most popular positions he filled were as the host of the television series Fear Factor, and as a color commentator for the UFC.

“Martial arts are a vehicle for developing your human potential.”

Rogan initially started with the UFC as a backstage interviewer. H moved his way through the organization with odd deals, such as working for free in exchange for prime event tickets. After about 15 “free” jobs, Rogan declared his worth and began getting paid for his commentator work. Eventually, he gained recognition as one of the best commentators in the sport. Additionally, he was twice awarded the Wrestling Observer Newsletter Award for Best Television Announcer—and was named MMA Personality of the Year four times by the World MMA Awards. What a star!

After a long run with the UFC, Rogan accepted an offer from NBC to host the infamous American edition of Fear Factor. A niche game show that played on particular phobias of the fragile human psyche. Fear Factor and Rogan had a successful run of over six seasons.

Podcasting has become a mainstream source of entertainment and education. And the psychedelic community has Rogan to thank for being a crucial source of psychedelic knowledge distributed on his critically acclaimed podcast series The Joe Rogan Experience.

In December of 2009, Rogan launched a free podcast with friend and colleague, Brian Redban. The podcast grew in popularity fairly quickly. By August 2010, The Joe Rogan Experience Podcast entered the Top 100 list on iTunes. Then, in 2011, it was picked up by SiriusXM Satellite Radio. For those of you readers unfamiliar with it, this podcast features guests of pure excellence to discuss current events, politics, philosophy, comedy, hobbies, and (of course) psychedelics.

The podcast can be heard streaming in nearly every dorm room across America. Other awards and milestones include 16 million downloads by 2015, making it the most downloaded free podcast ever.

Then fast forward to 2020: Rogan signed a multiyear licensing deal with Spotify for nearly $100 million—which may just be the largest licensing agreement in podcast history.

“It’s a weird experience when you’re just trying to talk openly about how you think psychedelic drugs and [cannabis] are beneficial, or a lot of different drugs, especially plant-based ones, can be beneficial. Especially those ones that have some connection to organic life, I feel like you can learn something from them, from psilocybin mushrooms, from peyote, from marijuana. They can be used as a tool.”

“There is not a therapy in the fucking world that will get a crazy, sociopathic, egomaniacal person to really look at themselves like a bag of mushrooms will.”

Among A-list thinkers, creators, and entrepreneurs, Rogan also has some of Reality Sandwich’s very own trailblazers on his show to discuss the facts and benefits of psychedelics. Below is a link to a potent discussion with Graham Hancock and the science behind ayahuasca. [Notice the psychedelic DMT art by visionary Alex Grey in the cover photo.]

And here is a plethora of Joe Rogan Quotes—because holy shit, Joe Rogan, you sure are quotable.

“Isn’t is problematic that the word “drug” is sort of this gigantic blanket that we throw over all these things that perturb consciousness?”

“There’s not a therapy in the fucking world that will get a crazy, sociopathic, egomaniacal person to really look at themselves like a bag of mushrooms will.”

“Like any tool, [drugs] can help you or hurt you.”

“I think psilocybin should be looked upon as a nootropic vitamin.”

“Work for that feeling that you have accomplished something … Don’t waste your time on this earth without making a mark.“

“One of the most fascinating lessons I’ve absorbed about life is that the struggle is good.“

“There’s a direct correlation between positive energy and positive results in the physical form.“

“Reality really is a theater. There’s no other way to describe it. It’s all so nonsensical, ridiculous, and chaotic.“

“I truly believe that in order to truly be great at something you have to give into a certain amount of madness.“

“We define ourselves far too often by our past failures. That’s not you. You are this person right now. You’re the person who has learned from those failures.“

“The number one reason why marijuana is illegal is because the Pharma Cartel does not want you to grow your own medicine. The Declaration of Independence was written on hemp paper. The first car ever made ran on hemp oil. Hemp seeds are also the healthiest food on the planet, with the highest protein content out of any plant.”

“You are one minuscule piece of a never-ending cycle. In fact, you’re not even a piece. You’re just a holder for billions and billions of other pieces. Whether that’s organic components, living organisms inside your body, bacteria or whatever it is, you’re just part of the soup of the universe, so just try to enjoy what’s good about it.”