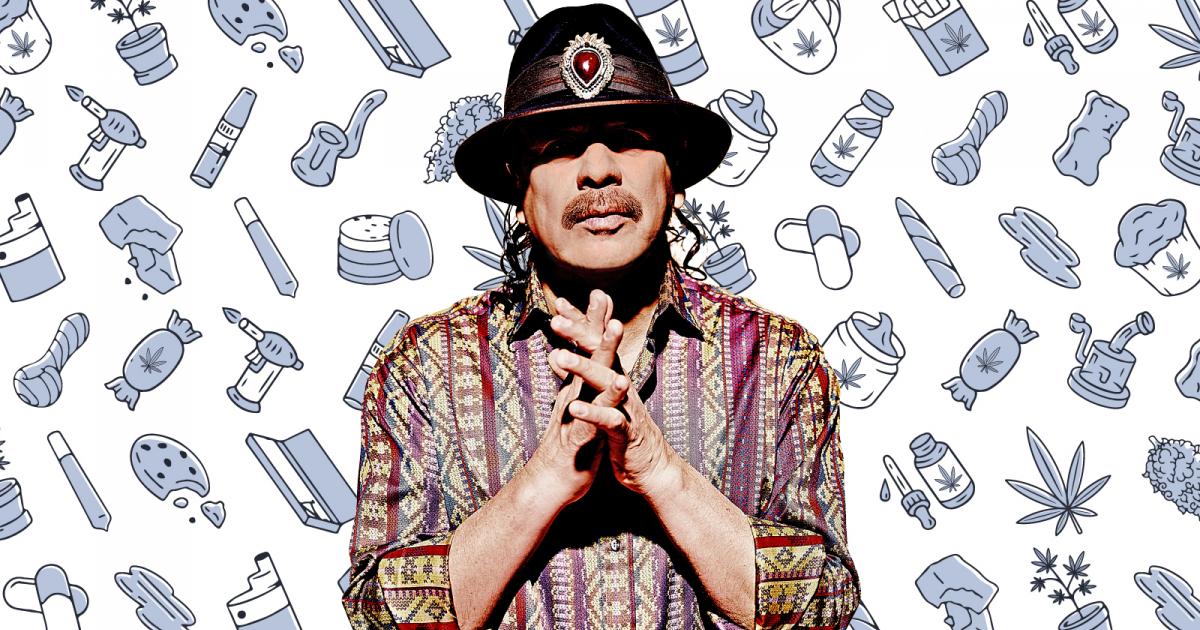 The magic of Carlos Santana transcends his status as one of the most legendary rock stars of all time. From shredding at Woodstock to winning ten Grammy awards with his pioneering blend of latin-influenced rock, all the while advocating for cannabis use and launching his own weed brand, the man behind the myth has always existed on a higher plane.

Named in Rolling Stone's “100 Greatest Guitarists” — coming in at number 20 — Santana shot to stardom from the creative nebula that was San Francisco's Haight Ashbury in the late sixties. One of the many iconoclastic rock stars that rose from the hotbed at that time, Santana aligned with bands like The Grateful Dead and The Jefferson Airplane. After playing one the sickest sets at Woodstock, which included an 11-minute instrumental version of “Soul Sacrifice,” the largely unknown artist found his fanbase, and the rest is history.

Known for pausing concerts to speak on the “spiritual use of cannabis” between songs, Santana views weed as less of the product-based commodity market it is becoming, and more as the medicine it's always been. As a young child growing up in Tijuana, his first experiences with cannabis were in his mother's garden.

“When I was a child my mom used to have this plant for medicine,” Santana told Weedmaps. “She would put it in alcohol and let it sit there. Then, you were able to take care of your knees for rheumatism or arthritis, any number of things.”

He continued, “She was really proud of being a gardener and cooking. It was my mom's fascination besides the family, the flowers that she had. She had beautiful roses and she noticed that the ants would come to get them because the roses were so beautiful and delicious and sweet. So she got the marijuana tincture and put it around the roses and the ants would get so high, they would forget what they were doing and turn around.”

It wasn't until Santana moved to San Francisco with his family and started playing music in the local scene that he began using cannabis as a spiritual tool for vibrating at an optimal creative frequency.

“I didn't start actually smoking it until '65, '66,” he said. “When I started hanging around Haight Ashbury, all that, you know the Grateful Dead, Quicksilver. That whole wave of consciousness awakening took place in the Haight Ashbury and at the Fillmore. That's when it became normal and natural.”

Santana believes cannabis is a tool for the artist to activate and realize imagination. “All artists need to stimulate their vision,” he said. “We say if you close your eyes and see it, you can paint it. If you hear it, you can play it. You know? So I think it is mainly for the creative process of stimulating, igniting, and activating your imagination on a whole other level.”

Santana's lifelong love of weed has recently culminated in a new cannabis line, Mirayo by Santana. “It's called Mirayo, and it comes from knowing that photosynthesis is a language that talks to plants,” he said. “There's medicine, and then there's drugs. Drugs humans make in a laboratory. Medicine, the sunlight makes with the earth.”

Available in California, Mirayo features sungrown cannabis in a few different forms, 5-packs of half-gram pre-rolls and 7-gram jars of flower. Products are available in three different strains, or “categories of consciousness,” like Centered (indica), Radiance (sativa), and Symmetry (hybrid).

He continued, “We want to emphasize how much photosynthesis plays a role with soil and water and sunlight to tell this plant to go and be this, so you can go and be you.”

In honor of the Mirayo launch, we spoke to the ethereal and seemingly all knowing being behind the brand on the kind of weed that takes him where he wants to go.

While Santana's relationship to cannabis exists on a broader plane than consciously sampling the strains and products du jour, he does list one of the trendiest product genres on the market today: Ice Cream strains. “I like the ones called Ice Creams,” he said. “Do you know the ones I'm talking about?”

Ice Cream strains like Ice Cream and Ice Cream Cake are award-winning hybrids with a balanced high that's at once alert and relaxing, making them perfect for creating.

“You can do martinis or scotch, but if you take a toke, your music or writing and creative process become a little different because it's not a depressant,” he said. “It seems like people who drink alcohol, they only write depressing songs about misery or victims or whatever. But people who smoke weed, they talk about changing the world, the Berlin wall coming down, or, you know, climbing out and telling the truth that the world needs to hear.”

“Cannabis is like having a personal relationship with something that suits your own unique authenticity and individuality,” said Santana. “For me, it's sativa strains because I like to be productive and creative. I can't do something that all of a sudden I can't function. So I want to be part of something that stimulates the creative process.”

He continued, “I like to be able to promote a frequency, which is really what it is. A frequency that's conducive to creativity. Whether you're dreaming awake or you're dreaming in your dreams, either way, you're still dreaming.”

“Even though I'm 73, I'm still curious like a young teenager and want to experiment, to explore different levels of consciousness,” he said. “Right now, I'm still mostly smoking, but I'm investigating and trying a little bit of the gummy things, too.”

While he wasn't sure what the brand was, they're raspberry-flavored, square-shaped, and great for nibbling on corners. “The gummy things, I find those to be interesting, especially because I haven't really done a lot of them. I'lI just take one little quarter and it helps me just to think like, 'Oh, that's what this is.' It's like filling in a piece of your curiosity.”

He continued, “For me, it's still always about consciousness. Finding something to stimulate your creativity, and dive into different kinds of consciousness that can collectively awaken people to create more peace, unity and harmony,” he paused. “That's what it's all about.”