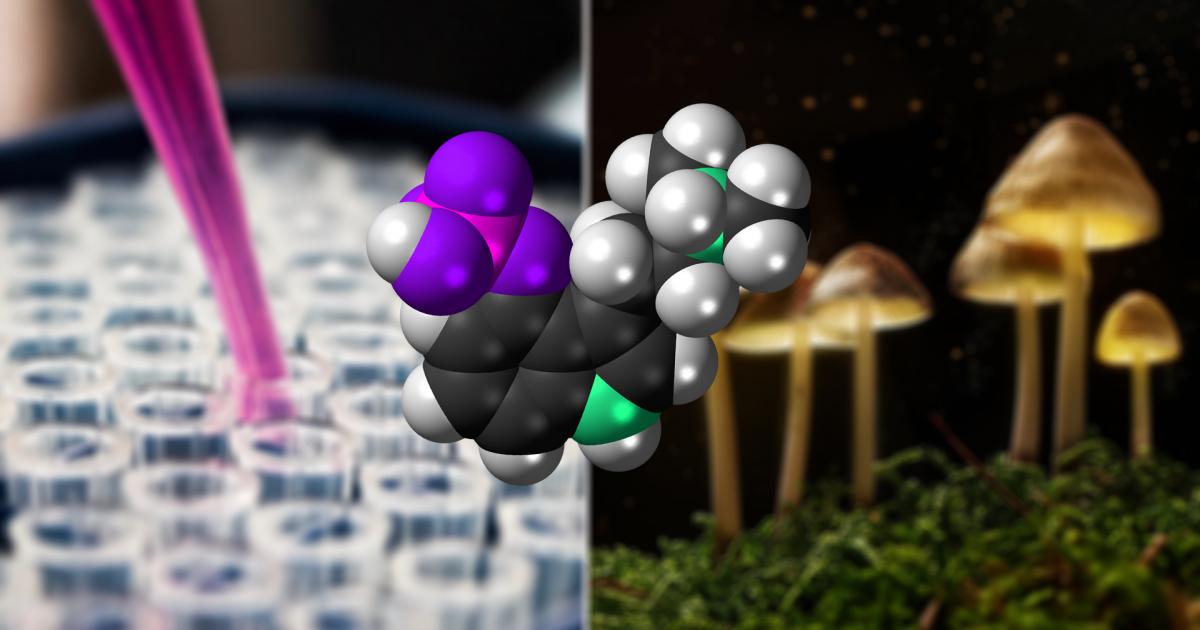 Psilocybin is known as the active compound in so-called “magic mushrooms”, yet most psilocybin used in clinical trials today is synthesized in laboratories without the use of biological material.

As psychedelics-assisted therapy gains momentum, investors need to understand the difference between the current available means of obtaining psilocybin.

One method will likely dominate the industry in decades to come.

Four methods will compete for the projected legal psilocybin markets, each with their own set of pros and cons, ranging from sustainability and therapeutic potential to production cost and scalability.

“There's a few different routes to producing psilocybin. The one that's been pursued most commonly in the legal and medical space is the total chemical synthesis of psilocybin,” says Marshall Tyler, Director of Research at Field Trip Health (CSE:FTRP) (OTCQB:FTRPF).

Isolated psilocybin was branded in the late 50s by Sandoz as Indocybin and sold commercially for therapeutic clinical research, until becoming scheduled by the United Nations in the 1971 Convention on Psychotropic Substances. The first chemical synthesis of psilocybin is attributed to Albert Hoffman, the Swiss chemist famously known for having also discovered LSD.

Today, synthetic psilocybin is the most widely-used form of psilocybin in clinical trials being conducted around the globe.

“I think that chemical synthesis is a very efficient way to make these molecules because they're structurally very simple molecules to make. They're not like cannabinoids or antibiotics that have a lot of complications in the molecular structure. They're pretty easy to synthesize,” says Andrew Chadeayne, founder and CEO of CaaMTech, an early-stage psychedelics research company.

Furthermore, being a crystalline compound, synthetic psilocybin can be purified into 100% pure individual molecules.

Today, more companies are entering the market as suppliers of research-grade psilocybin, in what continues to be a bottlenecked supply chain. While other methods are becoming available, Field Trip’s Tyler believes that chemically-synthesized psilocybin will continue to dominate clinical trials and the medical applications of the drug for the foreseeable future.

“It's getting easier and easier to do the chemical reaction that produces psilocybin. There are continuous advancements being made and it's actually not that expensive,” says Tyler who holds a Master’s degree in chemical biology.

“As with any drug development, unfortunately, it's very, very difficult to get a botanical drug approved. And so having this single molecule in isolation makes it a lot easier to push through clinical trials and ultimately get a drug approved for depression and other related disorders,” says Tyler.

COMP360, Compass Pathways’ (NASDAQ:CMPS) proprietary formulation of psilocybin is currently undergoing a phase IIb clinical trial to assess its efficacy in the treatment of  treatment-resistant depression.

The company said to Benzinga that, being a modified version of synthetic psilocybin, COMP360 can be registered as a new chemical entity and benefit from market exclusivity of up to 8 to 11 years in the European Union, and 5 to 7 and a half years in the U.S.

The Usona Institute, a nonprofit for psilocybin research, is also conducting phase II clinical trials on the efficacy of psilocybin for major depressive disorder, involving seven U.S. sites and 80 participants.

Today, both organizations provide their versions of synthesized psilocybin to accredited researchers free of charge, though extra charges are involved in the transportation and distribution of the scheduled substance.

For millennia, mushrooms were the only available source of psilocybin for human consumption. These days, they remain the most propagated way of taking psilocybin in informal circles outside of clinical trials.

Critics of chemically-isolated psilocybin argue that psilocybin-producing mushrooms contain a number of other compounds that could contribute to their overall therapeutic effect.

“The biggest advantage to naturally-occurring magic mushrooms is that [they] make sort of a cocktail of active ingredients, in that it’s not just psilocybin,” says Chadeayne.

He went on to say that the overall experience of consuming Psilocybe mushrooms comes from the interaction of psilocybin with other ingredients like monoamine oxidase inhibitors and aeruginascin.

“Those molecules might contribute to the overall psychedelic experience. So they might have a lot of value in their own right. And if you're doing chemical synthesis, you don't get any of those molecules. So you're losing out on this sort of chemical complexity that the organisms are able to produce naturally,” adds Tyler.

Psilocybin-producing mushrooms are thought to work in a similar way to cannabis flowers or whole-plant extracts, where THC and CBD are believed to interact with minor cannabinoids and terpenes to produce a different effect to that of the isolated compounds on their own.

In its lab located at UMass Dartmouth, CaamTech is working to understand the role of minor compounds in naturally-occurring psychedelics. The company’s own research shows how psilocin (the end product of psilocybin after being metabolized by the body) affects serotonin 2A receptors differently by itself than accompanied with other molecules present in the mushrooms.

Field Trip Health is pursuing this goal in Jamaica, where psilocybin is decriminalized. The company is researching the effects of whole mushrooms in a partnership with the University of the West Indies, though human trials have not been announced.

Psilocybin produced by mushrooms can also be isolated, to result in a product that is chemically identical to lab-synthesized psilocybin, but derived from mushrooms instead of a chemical reaction.

“Mushrooms aren't a very efficient biological factory,” says CaamTech’s Chadeayne, ”in that the active components of mushrooms are around 1% of the total mass of the dried mushroom. Compare that to cannabis where it’s like 30%.”

Field Trip’s Tyler added that in synthesizing psilocybin from a chemical reaction, the process involves “a lot less stuff to filter out,” than with organic synthesis. In the latter, a number of biological by-products need to be separated from the final product in order to isolate the resulting psilocybin.

However, some companies in the sector are betting on the possible success of this method above chemical synthesis. This year, Mydecine (CSE:MYCO) (OTC:MYCOF), a Denver-based psychedelics research company with operations in Alberta, Canada, announced a Schedule 1 Dealer's License from Health Canada to legally provide naturally-sourced psilocybin for therapeutic research around the globe.

CEO Joshua Bartch told us that in his view, sourcing psilocybin from its original organic material can actually be more cost-effective than chemical synthesis.

“Even when you put aside the costs, it’s still easier to naturally source psilocybin than it is to create it. The process of synthesizing any compound can be complicated, much less a psychedelic substance, and a lot can go wrong. Conversely, sourcing psilocybin naturally is just a simple extraction process,” said Bartch.

Psilocybe mushrooms in order to develop products that can provide the benefits of full-spectrum psilocybin while driving consistent pharmacological results.

“We strongly believe there are numerous valuable active compounds that can either have positive or negative effects on the overall consumer experience, and it is our responsibility to figure out and fix the unpredictable outcomes that come from Mother Nature,” said Bartch.

Pushing its way between nature’s methods and man-made chemical reactions, is a novel method that is gaining momentum: the production of psilocybin from yeast.

Earlier this year, a group of Danish scientists released a paper describing the successful biosynthesis of psilocybin from a genetically-modified version of the yeast fungi.

This process, which is already under production for cannabinoids, is poised to yield vast amounts of psilocybin at lower prices than natural extraction or chemical synthesis.

A Danish company called Octarine Bio is leading the sector in this regard. The company recently managed to raise $1.8 million to further its research. The investment was backed by Canopy Growth founder and former CEO Bruce Linton as well as the Danish State Growth Fund.

CammTech’s Chadeayne thinks that biosynthesized psilocybin can be an interesting hybrid.

While the area is still new, Chadeayne projects that modified yeast and bacteria can produce psilocybin more efficiently than magic mushrooms, but less efficiently than a chemical synthesis.

From a regulatory perspective, this approach could bring promising results.

While there appears to be no consensus among the industry as to which is the most cost-effective and convenient method to produce psilocybin, it’s likely that the market will choose its winners in the years to come. Unanticipated sets of nuances could also result in the coexistence of several methods for different applications and submarkets.

Picture created from images from Pixabay, Unsplash and Wikimedia Commons.

Welcome to the Cannabis Countdown. In This Week’s Edition, We Recap and Countdown the Top 10 Marijuana and Psychedelics Industry News Stories for the Week of January 4th – 10th, 2021. Without further ado, let’s get started. read more