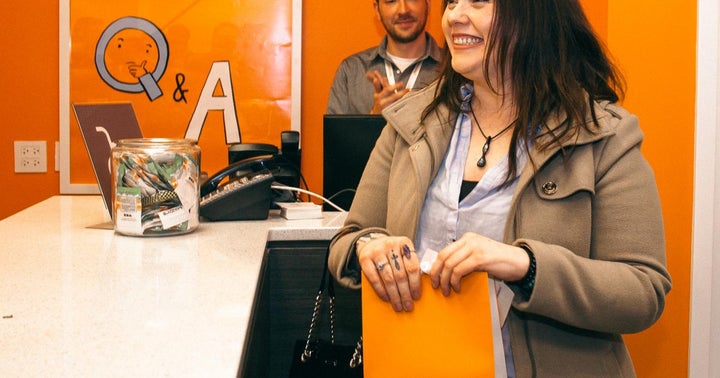 Illinois kicked off adult-use cannabis sales on the first day of the new year and the new decade, allowing the state’s residents ages 21 and up to purchase and possess 30 grams of cannabis.

Stratton bought “a 100 mg tin of Mindy’s Edibles Glazed Clementine Orange Gummies in a 5 mg per piece dose” at Cresco Labs' (OTC:CRLBF) Sunnyside’s Lakeview dispensary, according to the cannabis company.

The product is “a very popular microdose for beginning edible consumers,” Cresco said.

Stratton said she was pleased to support the event and took pictures of the dispensary.

“I’m here to celebrate a big day in Illinois,” she said.

Those convictions made it difficult for the offenders to find suitable jobs, housing and even financial aid for studies.

"Tomorrow when adult-use cannabis becomes legal, pay attention to the fact that we are beginning to accomplish four very important things: we are ending the 50-year-long war on cannabis. We are restoring rights to many tens of thousands of Illinoisans. We are bringing regulation and safety to a previously unsafe and illegal market. And we are creating a new industry that puts equity at its very core," Pritzker said in a statement.

Illinois customers had to deal with long lines outside stores on day one and limited choices once they entered, according to the Chicago Sun-Times.

On the first day of sales, NuMed Chicago near West Town sold all of its marijuana flower by about 4 p.m. and had to offer other cannabis products to customers, the newspaper said.

The dispensary also had to send away around a dozen customers 30 minutes before closing because of too many people being in the store, the Sun-Times said. NuMed served around 500 customers Wednesday.

Some customers found the price of legal weed shocking, the newspaper reported.

”It’s pricer than at street value, but you pay for the quality and convenience,” an anonymous student from Loyola University told the Sun-Times.

On the first day of recreational cannabis sales, Cresco Labs served 3,145 people at its five Sunnyside dispensaries, selling 9,258 cannabis products with an average ticket price totaling $135, according to the company.

“We’re ecstatic for our Sunnyside dispensaries to begin serving recreational customers on such a historic day that launches a new era of cannabis and the development of an industry that will bring greater justice, social equity and business ownership opportunities throughout the state,” co-founder and CEO Charlie Bachtell said in a statement.

Green Thumb Industries Inc. (CSE:GTII) (OTC: GTBIF) said Thursday that it has opened its 40th store, Rise Joliet, the only adult-use-only store in the state.

“Jan. 1 was a historic day in Illinois as adult-use cannabis sales launched in Illinois, and we’re honored that Rise Joliet is part of that history,” Ben Kovler, GTI's founder and CEO, said in a statement.

“Our stores that sell to all adults 21+ – Rise Mundelein, Rise Canton, Rise Joliet and 3C Joliet – have served thousands of people so far and the energy and enthusiasm from new customers has been overwhelming.”

Sunnyside customer Jacqueline Ryan made the first legal purchase of recreational cannabis in Illinois on Wednesday, according to Cresco Labs. Photo courtesy of the company.