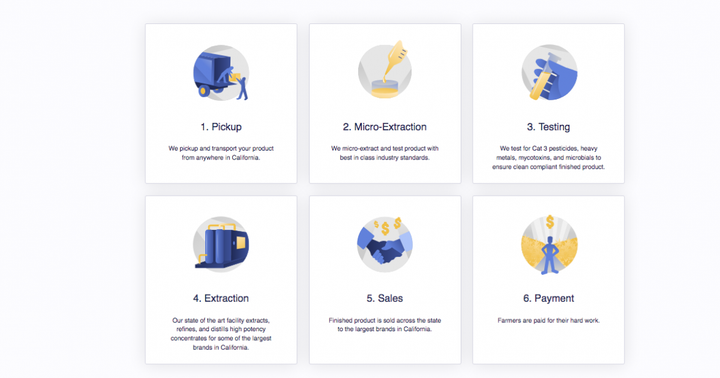 This lack of name recognition is not a result of failure. In the Golden State, Sisu Extracts is a powerhouse for distillates and other extracts. If you've ever used a vape pen in California, there's a high probability Sisu's oil was inside.

Sisu extracts provide the state with roughly 20% of its total cannabis distillate products, according to the company.

Beyond the product, what makes Sisu so fascinating is its human-centered business model. This divergence from the status quo caught our eye, and we reached out to Sisu Extracts to learn how one company is fighting to support multigenerational family farmers.

When Sisu Extracts launched, it commanded headlines by being the first permitted volatile extraction plant in Humboldt County, the epicenter of the Emerald Triangle.

Even more impressive was Sisu's promise to split all profits 60-40 with its cultivators. Within the first year of business, the company processed 146 million servings of high-potency cannabis oil and nearly 40 tons of cannabis in the first season alone.

The source of the staggering amount of plant matter needed to produce these oils was not a massive grow op; it was people who had spent their lives growing cannabis.

Rather than focusing on backward vertical integration, Sisu Extracts said it chose to support local farmers at a livable wage. Cultivators can contract with Sisu to supply any part of the cannabis plant for processing — “their whole crop, part of their crop, bottoms or just their trim," Greg Ivanov, Sisu's extracts sales coordinator, said at the Humboldt County Growers Alliance’s Seed to Sale Pre-Planting Planning Conference.

From their press statements to their website, Sisu Extracts gives credit where it's due — to California cananbis farmers.

The company prides itself on fostering close relationships with local farmers. After the tremendous success of last season's 60-40 split, Joe Wynne, Sisu's supply chain director said he realized that Sisu Extracts could do even more for its suppliers.

"Everyone says they want to help farmers, but I don't see anything more meaningful than putting more money in their pockets."

In mid-May, the company began exclusively offering northern California cannabis farmers 70% of profits made from the extracts they sell, and after seeing much success from go-to local farmers, Sisu expanded the offer to marijuana farmers across the state.

A ratio only means so much to those who don't work in the industry. Here's a look at how Sisu Extracts compensates farmers on a per-pound basis compared to other processors.

For plant matter with 12% THC biomass, most companies would offer cultivators approximately $140 per pound, but Sisu's 70-30 model will instead compensate at $198 per pound; this constitutes a 41% increase.

For small farmers, this can be a matter of survival. For 14% THC biomass, Sisu offers farmers up to 48% more versus competitors.

"Sisu's 60-40 split contracts helped me through the tough parts of this year," said Holly Hayes of Rustic Farms.

"I'm choosing to work with Sisu in 2019 because I know that we have our contracts signed and Sisu will turn my trim into more money."

Related Story: From Tea To THC: The Heady Rise Of Growpacker's Stephen Boyd

The only question left: what comes next?

As Sisu Extracts expands its operations, its ambitions include any cannabis cultivator in California.

As a result of its generous profit splitting business model, larger-scale farms such as Emerald Queen Farms have also signed contracts with Sisu.

"This year we are locked in with Sisu as a superior solution to higher prices and steady sales."

When a brand chooses to enact social change for more than just marketing purposes, it can make a massive difference in the quality of life of those at the foundation of this industry.

After all, someone has to grow the plants at the end of the day. Why not make sure they have a chance at the American Dream too?