Another Spark For Russia ETFs

Among single-country emerging markets exchange-traded funds, few, if any, have spent more time in the post-election limelight than the VanEck Vectors Russia ETF (NYSE:RSX).

RSX, the largest and most heavily traded Russia ETF listed in New York, was one of last year's best-performing single-country emerging markets ETFs, thanks in large part to rising oil prices. Russia is the largest oil-producing nation outside the Organization of Petroleum Exporting Countries and RSX is reflective of that status with an energy weight of 38.7 percent. That is more than double the ETF's second-largest sector allocation, which is materials at 16.8 percent.

RSX is up more than 2 percent to start 2017, though that sharply trails the more than 7 percent gained by the MSCI Emerging Markets Index. Still, data suggest professional investors are warming to Russian equities.

In a note out Monday, Azous went on to point out that “fund managers have increased their active allocations to the Russian equity market quite rapidly to a multi-year high level.”

Increased interest in Russia is also reflected in the US-listed leveraged ETFs risk-tolerant traders often turn to position for short-term moves in that country's stocks. 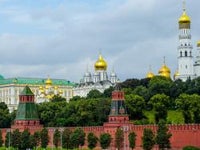 Some Good News For The Russia ETF

To Russia For An Inauguration Trade

From Russia With Cash ... Sort Of