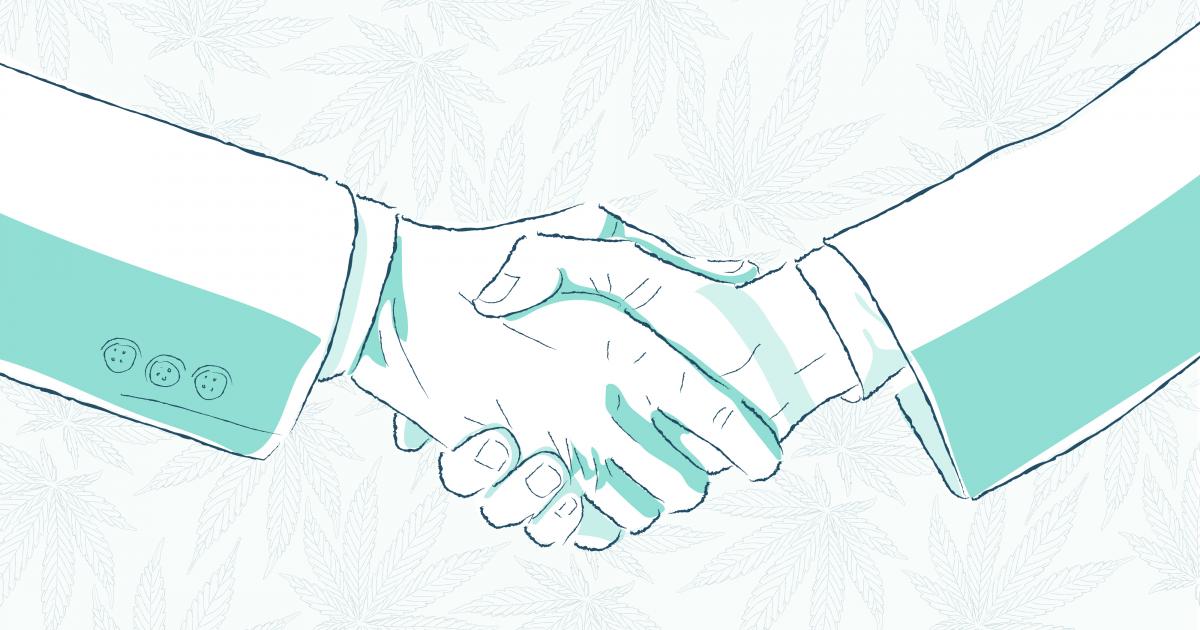 The deal would create the largest enterprise in the cannabis industry by revenue.

It is estimated that the combined entity will be valued at roughly $3.9 billion, boasting pro-forma yearly sales of $685 million.

Benzinga caught up with Aphria CEO and chairman Irwin D. Simon, who will maintain those two positions in the new company, and Tilray CEO Brendan Kennedy, who will serve in the new corporation’s board of directors alongside one other person picked by Tilray, and seven others (including Simon) from Aphria.

Conversations between Tilray and Aphria started 12 months ago. At first, Simon said, Kennedy was not entertaining the idea of a merger, at all.

“We were really not talking about an acquisition. It was just trying to understand what each of us were doing and how it was complimentary,” Simon says.

But ongoing conversations softened him up.

Now, Kennedy seems quite comfortable passing the torch to Simon, leaving his spot as CEO after many years at the helm.

“I'm thrilled to announce this today, to have someone with Irwin's knowledge and expertise in public markets, at the helm of the company,” he added.

Simon is eager too. He finally gets to run a public company of a size that’s comparable to the one he had co-founded in the early 1990s — The Hain Celestial Group.

“I now find myself in the position to run a company with the same market cap of Hain, if not bigger, in an industry that, if you look at the size of this industry from around the world, it's $100 billion dollar-plus industry, and an exciting transformational industry,” he said, praising the Tilray team he’ll be closely working with in the coming years.

The excitement is evidenced very clearly by the choice to keep the Tilray name for the combined entity.

Recognizing that both names are very popular, but have also had their issues in the past, Simon explained the decision was based on Kennedy’s personal connection to the Tilray name, as well as the fact that the brand resonates strongly with Millennial investors and consumers alike.

‘On The Edge Of Breaking Through’

Aphria and Tilray intend to create a global cannabis company that can overtake any of the large U.S.-based MSOs.

To achieve that, their strategy is multifaceted.

“I am an operator. I am an entrepreneur. I am a team builder. And I like to be a visionary, defining incredible categories, incredible brands, and incredible products," he added. "And that's what I see here — Aphria and Tilray coming together means we’ll have the dollars to invest in research and technology, to come out with some conclusive studies that we're trying to do on the benefits of cannabis.”

“This is no longer an industry about just rolling up pre rolls and getting high. This is a lot more. There are new attributes, and a lot more professionalism, and a lot more branding that's brought to this industry,” Simon declared.

“The Canadian LPs are kind of not in vogue right now. There's been a lot of market cap loss with Canadian LPs. There's a lot of cash loss. But if you come back on the combination, if I have to compete with Canopy and Aurora today, we're much larger, in Canada, in Europe, and in the U.S.," he added. “There's going to have to be some moves, no matter where the U.S. market goes, that will give me a seat at the front of the table in the U.S. and we'll be ready for it.”

According to Tilray and Aphria, the combination should result in pre-tax cost savings of at least $78 million. A big part of these cost reductions will come from moving Tilray’s purchasing of cannabis from other LPs into Aphria’s facilities in Leamington, Ontario.

Also big will be the savings from:

“There is at least C$100 million in savings from low hanging fruit. And we think there are other major savings out there that will come as we get deeper into putting these businesses together,” said Kennedy.

Sadly, “cost savings” has become almost a synonym of layoffs in the cannabis industry in the last year. And thus, the elephant in the room: will there be layoffs following the merger?

“We have very few layoffs during COVID,” Simon clarified quickly. “The great thing about this is, the big layoffs come in regards to closing facilities. There is not a big overlap here; if anything complimentary. And with moving a lot of the growth opportunities of Tilray into Aphria facilities, there will be hiring. I don't see massive layoffs there for the organization.”