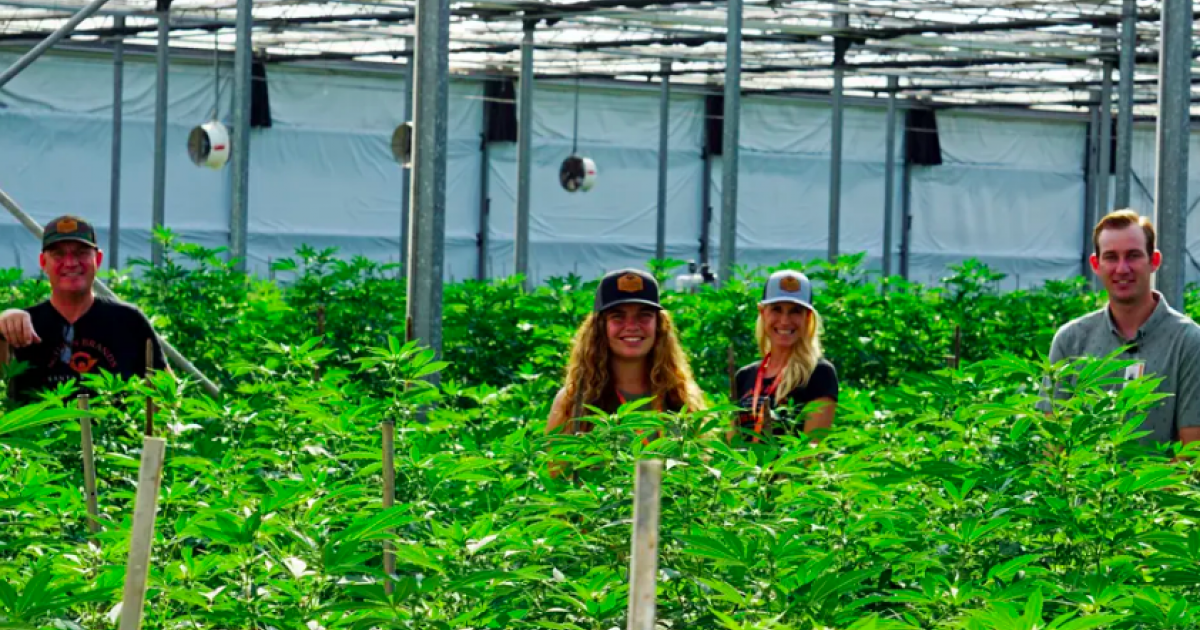 Three years ago, Hans Brand had his “eyes opened” to an issue that would change his family and his company.

Brand is a co-owner of Autumn Brands, a cannabis grower in Santa Barbara County Calif. As Autumn Brands transitioned from a nonprofit MED collective into the state’s newly legal REC market, Hans said he was issued a challenge to stop using pesticides – even those billed as “organic” – on his crop.

The person pointed out that some pesticides had been deemed safe for use on edible crops, like vegetables, but that not much information was available on the effects of burning and inhaling those same chemicals.

With that in mind, the company, which is owned by Hans, his son Johnny Brand, his daughter Hanna Brand and Autumn Shelton, a longtime colleague and friend of the family, instituted some new practices that are now its lifeblood.

Autumn Brands is among a minority of operators its size that uses no heavy machinery in its four acres of greenhouses and also uses no pesticides, whether classified as organic or not. Having all the trimming and other cultivation tasks performed by hand improves quality control, said the owners, who turn to so-called “beneficial” bugs to handle pests.

Those farming practices can negatively affect the company’s bottom line, as its crops are more susceptible to damage from pests and its insect treatments are more expensive than chemical pesticides. Still, the owners say they’re fine with taking some losses if it means they can also protect the health of their customers and the environment.

“If we have a problem, either it’s going to be fixed by nature or the plant is not going to make it to market because we have to throw it away,” Hans said. “That happens sometimes. That’s part of the commitment to being pesticide-free. It does not always work. It’s not the highest yielding crop in the world, but that’s OK because you do have the best quality product in the world, in my mind.”

Photo by Willis Jacobson
Hanna Brand, left, and Autumn Shelton stand in one of the Autumn Brands greenhouses in Carpinteria, Calif.

Autumn Brands, which started as a nonprofit MED collective five years ago, has experienced tremendous growth over the past year. The company has seen its market share rise significantly and its products – jarred flower, pre-roll packs and vape cartridges – are now available in more than 300 dispensaries across the state. The products are generally sold for a mid-tier price-point.

To handle that growth, the company is in the process of obtaining local permits to expand to another 1.5 acres. But Shelton, who manages the company’s finances, pointed out that Autumn Brands does not have any big-money backers and is focused on growing “within our means.”

“We’re self-funded and not really looking to have investor money come into our company to try to grow faster than what we can do,” she said. “We’re very frugal in how we do things, and it’s allowed us to be very successful.”

Despite its higher rate of crop loss due to its lack of pesticide use, the company is able to produce more crops than a traditional outdoor operation. Outdoor grows typically experience one to two harvests per year, while cultivators in greenhouses can harvest year-round.

“So the consumer is also always getting something new, something fresh,” Shelton said.

Hans said he was hopeful Shelton and the younger Brands would carry the company into the future – after whenever he steps away – while sticking to the health-focused practices that got it to this point.

“You give up a little bit [by not using pesticides], but the plant loves it better,” he said. “So the plant, in the end, you might not get as much weight per meter, but you get better weight per meter.”

“Is no-spray more expensive? Absolutely,” he added. “But it’s the right thing to do.”

From one flower to another

Autumn Brands is the result of each of the owners’ experience in the cut-flower industry.

Hans, who developed his first flower farm as a 12-year-old on his parents’ property in Holland, moved to the U.S. as an 18-year-old in 1985. He and his brother started a cut-flower business in northern Santa Barbara County before splitting a few years later to branch out on their own.

Hans ended up in Carpinteria, where he used the same greenhouses now utilized by Autumn Brands to build his B and H Flowers into what he says was at one point the second-largest cut-flower company in the country. The company went under a little more than a decade ago, as did much of the country’s cut-flower industry when labor laws made it much cheaper to produce plants overseas.

Hanna Brand, who now manages the business side of the Autumn Brands operation while her dad and brother focus on the farming, recalled growing up in and around the same facilities she now controls.

“We used to run around these greenhouses full of flowers and steal the electric carts at like 10 years old,” she said, laughing. “And then we’d help sleeve bouquets before and after school, and during the holidays.”

Hanna and Johnny both went to Cal Poly, where they studied agriculture, before taking the reins at Autumn Brands.

Autumn Shelton had been CFO for Hans’ former flower company and fills the same role, in addition to regulatory compliance, for Autumn Brands. Shelton said she’s enjoyed her experiences in the cannabis industry and encouraged more women to seek out careers in the still-developing market.

Autumn Brands is half-owned by women, while it’s estimated that only about 27% of cannabis brands are woman-owned.

Photo by Willis Jacobson
Hans Brand points to beneficial bug larva that he and his crew utilize in the Autumn Brands greenhouses.

Johnny, who manages the farming operation, said he’s proud to put out a product that the company considers among the “cleanest” on the market.

He said consumers have told him that the Autumn Brands products taste different than other brands.

To manage pests, the company orders a variety of bugs and larva each week. The insects include ladybugs and coreus, which eat mites and aphids that can damage crops.

Johnny said that many of the beneficial bugs are native to the region, which is helpful because they often attract mates through the greenhouse’s windows. Those windows are kept open, he said, to take advantage of the breeze from the Pacific Ocean, located less than a half-mile away, that wafts across the property daily.

“We definitely have a program and a strategy that works for us, but that came after spending a lot of time figuring out what works and what doesn’t work,” he said.

Hans backed up that assessment, noting that the past three years included a lot of trial and error.

Because of Autumn Brands’ practices, customers can be reasonably assured they won’t get pesticides in any of the company’s jars. But that doesn’t mean customers can’t get other surprises.

Sometimes a ladybug larva will go to market on buds that have been jarred – better that than the dead pest that would be left behind by pesticides, Hans argued – and customers will complain.

“We kid around like, ‘Oh, please send it back home. It needed to stay here; it didn’t listen,’” Hans said with a laugh. “But that can happen because it’s a life cycle. Sometimes the larva might not hatch here, but in the jar after it’s shipped out.”

While most cannabis cultivators do their best to avoid harmful pests, Hans noted that the critters are welcome in his greenhouses.

“We need pests to come in, because if you don’t have pests then all our beneficials will die,” he said. “So we are OK to live with a certain level of damage. You have to be OK that your greenhouse is not going to be perfect at all times. It’s the finished product, that’s what counts.”