The reality is that finding anything resembling a bright spot among emerging markets exchange-traded funds these days is becoming an increasingly difficult task. That task is even more difficult when evaluating the largest emerging markets.

China just posted its lowest GDP growth in a quarter of a century. Russia is mired in its worst post-Soviet era recession, one that could worsen this year. And Brazil, to put things delicately, is the epitome of the phrase “hot mess.”

Though the performance of the lone ETF tracking it is not yet reflecting it, Vietnam could be a bright spot among developing world economies this year.

To be precise, for the purposes of indexes and ETFs, Vietnam is classified as a frontier market, hence its spot as the tenth-largest country weight in the iShares MSCI Frontier 100 ETF (NYSE: FM). Investors looking for a more direct play on Vietnam should consider the Market Vectors Vietnam ETF (NYSE: VNM).

The country has not been shy about its desire to earn a coveted promotion from frontier to emerging markets status from index provider MSCI, but Vietnam is not on the index provider's list of countries positioned to earn that promotion.

As noted above, economic growth is faltering in several marquee developing markets along with smaller emerging economies, but that is not the case in Vietnam, as the Southeast Asian nation is expected to post GDP growth of 7 percent this year.

“Vietnam’s stock market has also attracted foreign investors, with overseas investors net buyers for the 10th consecutive year in 2015,” according to Bloomberg.

VNM has $332.1 million in assets under management, about $41 million of which has come into the ETF since the start of last year. 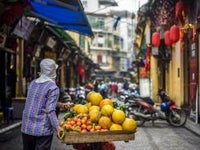 Why Money Is Flowing Into This Country ETF