No-Surprise No-Change From The Fed: Zero Rates Through 2023, Bond Purchases To Continue

These microscopic interest rates are here to stay for a while, the Fed confirmed Wednesday.

That was the crux of the news coming out of its meeting, and the stock market didn’t seem to register much surprise in the first few minutes after the announcement. Most major indices continued to trade both sides of unchanged, as they’ve been doing a lot of the day.

The Fed wrapped up its meeting with a quarterly outlook showing only one member of the Federal Open Market Committee (FOMC) expects a rate hike as early as 2022, and a small handful expect rates to begin rising in 2023. The majority of FOMC members see no rise in rates through 2023, meaning the zero-rate policy in place since last March is going nowhere fast.

That’s potentially good news for the stock market, which has rolled up better than 60% gains since zero rates took hold nine months ago in the early days of the pandemic. Many analysts think there’s more room for stocks to gain in 2021, especially if the economy starts to reopen thanks to the vaccine and fiscal stimulus comes into play. That remains to be seen, but at least it’s very clear the Fed has no plans to get in the way.

The central bank also remains committed to its asset purchase program, designed to keep borrowing costs low. The Fed will continue to increase its holdings of Treasury securities by at least $80 billion per month and of agency mortgage-backed securities by at least $40 billion per month “until substantial further progress has been made … to sustain the Committee’s maximum employment and price stability goals,” the Fed said in its statement.

It’s also still committed to letting inflation run “moderately” above its 2% goal to fight unemployment, the statement said, in words unchanged from the last meeting. The Fed’s assessment of economic conditions was also unchanged from the November meeting.

“Economic activity and employment have continued to recover but remain well below their levels at the beginning of the year,” the Fed said. “Weaker demand and earlier declines in oil prices have been holding down consumer price inflation.”

Importantly, the Fed—at least in its statement—didn’t hint at any changes in the asset purchase program. Some analysts think down the road the Fed might want to trim the purchases if inflation starts to show up. However, since the Fed sees no inflation threat at the moment, maybe that’s something it won’t have to face anytime soon. Rising commodity prices, on the other hand, have started to raise some eyebrows. And if a fiscal stimulus does become reality, that too, might force the Fed’s hand. But it probably won’t be for many months.

Another possibility some analysts see is the Fed shifting its focus to long-term bond purchases. That would potentially put pressure on longer-term rates so that consumers and businesses can still borrow at low costs for their long-term needs like infrastructure and mortgages. This would be more likely if the economy continues to sag.

The dollar index stayed relatively steady after the Fed’s announcement near two-year lows, while crude came back from early losses. The 10-year Treasury yield moved higher, reaching 0.94%, but that might reflect hopes of Congress coming through with a stimulus.

Fed Grapples With Forces Beyond Its Control

There used to be some drama associated with Fed meetings, an element of surprise, so to speak. Not much of that these days, and if you think that’s going to change in 2021 thanks to the vaccine and economic reopening, you probably haven’t paid a lot of attention to the Fed’s consistent dovish statements this year.

The long-term outlooks released by the Fed today provide a closer look at what the central bank thinks might happen in coming years, but it’s hard to imagine the Fed getting more hawkish anytime soon. Going into today’s meeting chances of a rate hike by next September stood at 6%, according to CME Fed Funds futures. The reading was unchanged minutes after the Fed’s meeting.

If you just go by the stock market, it might be hard to understand how the Fed could keep rates at zero into 2022 or even beyond. The fact is, there’s an incredible hole the economy needs to dig out of, and even with stimulus and vaccinations starting it could be a very dark winter. Shutdowns have already led to slower hiring, according to the government’s last payrolls report, and some analysts believe that disappointing data didn’t fully reflect all the layoffs seen in November. That means December’s data might be worse. Inflation shows no sign of moving either, which means there’s even less pressure on the Fed to hike anytime soon.

Then there are retail sales, which we now know fell sequentially in both October and November. That’s not good news considering we’re in the heart of the holiday shopping season. While retail sales are up a decent 4% year-over-year, the November data was far worse than analysts had expected, meaning consumer demand might be falling faster than expected as the shutdowns and lack of stimulus hurt households. The Fed can print money, but if people don’t use it to support businesses great and small, it will be difficult to expand the job market. So in that regard, there’s a limit to the Fed’s effectiveness.

This is probably why Powell and other Fed leaders have been pounding the table for months asking Congress to get money directly into consumers’ hands, either through direct checks or extra unemployment compensation. If the Fed’s calls for fiscal stimulus didn’t work, maybe today’s retail sales data and the November payrolls report helped light a fire under Congress, which now seems to be getting close to an agreement, according to news reports.

In his press conference, Fed Chairman Jerome Powell said the pace of jobs growth has moderated in recent months. He expects 5% unemployment by the end of 2021, down from nearly 7% now. He added that consumer prices “have leveled out recently.” The FOMC sees 1.8% inflation next year, up from a projected 1.2% this year.

Powell declined to name specific numbers that the Fed is targeting for its maximum employment and price stability goals. He promised that once the economy gets there, the central bank will “put the tools” it’s using now “back in the box” but will use them “for as long as it takes to make sure the job is done.” He also said the market would get warning before the Fed starts tapering the amount of its asset purchases. That could be designed to avoid another “taper tantrum” in the market like what happened in 2013 when the Fed started pulling back on quantitative easing.

Powell said he’s cheered by the recent vaccine news, but that “the next few months are likely to be very challenging.” He added that the “highly accommodative” policy has helped the economy, especially housing, durable goods, and vehicle purchases. The service industries, however, remain weak, he said, mainly due to the virus.

He also declined to talk about what he called the “hypothetical situation” in which the Fed would consider shifting its bond purchases more toward the longer end of the curve. 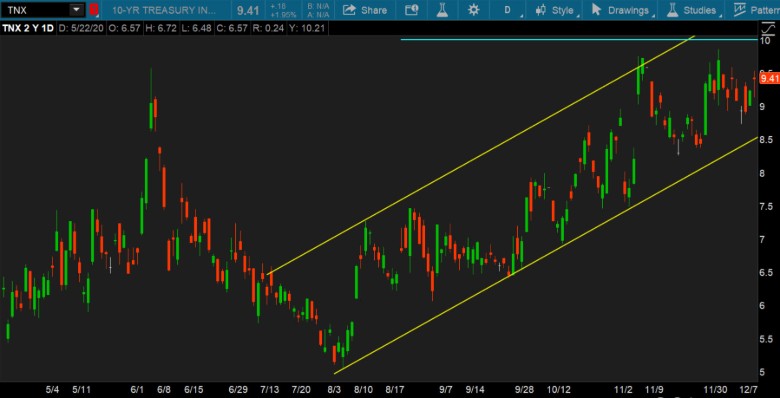 CHART OF THE DAY: CHANNELING UP. CHANNELING UP. The 10-year Treasury Index (TNX—candlestick) has been trending up in a channel (yellow lines). While it’s still moving within the channel, it’s worth noting that it topped out below 1% (blue line) twice. Data source: Cboe Global Markets. Chart source: The thinkorswim® platform from TD Ameritrade. For illustrative purposes only. Past performance does not guarantee future results.

Inflation Still Hibernating: Anyone who watches the Fed knows how closely the Fed watches inflation. Earlier this year, Chairman Powell made clear the central bank would be comfortable letting inflation go above its long-term 2% goal if that’s what’s needed to ease unemployment. When you think of unemployment, you might think of the official number, now below 7% after climbing into the teens last spring. However, the Fed also looks at the number of people who’ve been forced to leave the job market and aren’t counted in that official number. In other words, just getting the official rate down to 5% might not be enough to satisfy the Fed, especially if inflation remains benign with these bottom-basement rates.

Coming out of the 2008 recession, inflation took a long time to revive. It did rise 3% in 2011, but a lot of that reflected high crude oil prices. For the most part, inflation stayed below 2% until finally clawing slightly back above it in 2017 and 2018. By 2019, even before Covid, it was back below 2%. The recession we’re going through now is arguably far worse than 2008, and the dampened inflation could last even longer. That’s why the Fed might not have its hand forced by prices. And if you remember, it took seven years for the Fed to finally raise rates after the 2008 downturn.

Are U.S. Airline Stocks Flying Too High? Airline stocks may be down 28% from pre-pandemic highs, as tracked by the Amex Airline Index (XAL), but they’ve staged an impressive 86% rally from the “COVID Crash” in March. However, according to recent news from industry site Freightwaves, trouble could be ahead as the expiring CARES Act—which prevented employee termination in exchange for stimulus funds—could mean less financial support moving forward. Already, around 36,700 airline jobs have been terminated, meaning that the industry has fewer employees now than it did in the last three recessions going back to 1990. Also, crude prices have started to rise and are at their highest levels since February, potentially raising costs and pressuring margins. Is the industry due for more turbulence? The jury is still out, though let’s see if any potential stimulus from Congress contains new funds for airlines and other travel-related firms. Also, consider keeping a close eye on travel data over the holiday season. We’ll provide some updates soon.

Value at a 39 P/E? Turning back to yesterday’s steep rally in Apple Inc AAPL, another thing maybe in AAPL’s favor is that some analysts still perceive it as a “value” stock. That probably sounds surprising considering its valuation has roughly doubled over the last few years and its price-to-earnings ratio now stands near 40. However, that could look cheap to some investors compared with valuations of some of the other firms whose stocks rocked the market this year thanks to their “stay at home” offerings. If consumers recover in 2021 as vaccine use grows more widespread, you could argue that AAPL—as a company that mainly focuses on consumer products—has more to gain than some of the other mega-caps focused on social media and cloud applications, and that could be influencing this rally in AAPL’s shares.

Photo by Erol Ahmed on Unsplash