Video: KushCo CEO Explains How Greenlane Merger Catapults Them To 'The Next Level' 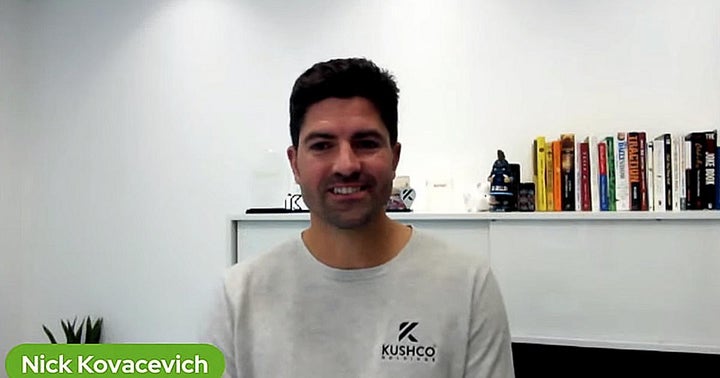 Under the agreement, KushCo will become a wholly-owned subsidiary of Greenlane, and the company’s co-founder, chairman and CEO, Nick Kovacevich will become CEO of the combined company.

The joint company is estimated to generate pro-forma revenue of approximately $310 to $330 million this year.

Soon after the merger announcement, KushCo posted its second-quarter earnings with $32.9 million in revenue, representing a 23% sequential increase, and 9% year-over-year growth.

The company has been even busier in the recent period, having completed a $40 million equity raise, with plans to pay down its debt of around $17 million.

“We just, for once, got some tailwinds behind us, and after fighting headwinds for 18 months, that sure feels good,” Kovacevich commented on its recent activities during Monday’s Benzinga Cannabis Insider live show.

During the interview, Kovacevich explained the idea of the merger was on the table for several years, even getting close to happening just before the pandemic came about.

“We just think it makes sense, and people have agreed with that. That’s the general sentiment,” Kovacevich said.

“Both of our companies need a little bit more scale to get to that meaningful profitability and EBITDA standpoint. Putting them together, we get that scale overnight.”

KushCo's CEO pointed out that, although people usually think of KuchCo and Greenlane as competitors, they actually have different businesses with very little overlap. This means that the merger would help diversify the pro-forma company across products, geographic markets, and customers.

With Greenlane having a notable presence in Europe, KuchCo is getting global via this deal, added Kovacevich.

Furthermore, institutional investors will be provided with the opportunity to play a proxy through Greenlane/KushCo to get access to multi-state operators.

Big Companies Shouldn’t Do Everything In-House

Explaining the need for ancillary providers in an industry known for trending toward vertical integration, Kovacevich said that “people have realized it's not efficient to try to create everything in-house, especially if it's not within your core competency.”

Taking packaging as an example example, he said that, for companies that are competing for a soon-to-be $50 billion market, turning their focus to packaging, which accounts for around 1% of that, makes no sense. What’s more, with companies having so many products, they need too many different products, fromm syringes and concentrate containers, to small jars and joint tubes. That’s why even the ones doing some of it in-house choose to do it for only a few products, and not for all of them.

Another way to secure your position is through intellectual property and through contracts, he went on.

“We announced the combined company will have over 200 articles of intellectual property,” he said, adding that they have already confirmed a big supply contract with a leading vape operator on the West Coast, and a contract with one of the top five largest publicly traded multi-state operators.

While Kovacevich doesn’t reject the idea of possibly expanding across other industries in the future, such as pharma, he pointed out that the company’s focus currently remains on the cannabis and CBD markets.

Making A Very Profitable Company And Choosing The Focus

With this merger, KushCo will also have a chance to create its own brands on the ancillary side, attain global reach, and work on “expanding the margin ceiling,” said Kovacevich.

The CEO further reminded how the combined company will have a market cap below $500 million (projected around $350 million), which is very surprising considering the high growth industry they are operating in, the fact that both companies were pioneers in the space, and one of them is even listed on the NASDAQ.

By means of conclusion, Kovacevich went into his plans to "make this a very profitable company,” and to be in a perfect position to acquire other ancillary businesses in the future.

The merger “catapults us to that next level and puts us on scale with really anyone out there, from a size and infrastructure standpoint, and global reach.”

Complex legal frameworks pose all sorts of challenges. One of them is setting up infrastructure in every new market a cannabis company wants to get into. This means only a small number of companies in this industry are really global, or national for that matter, explains Kovacevich.

On the other hand, being an “ancillary provider, we don’t have to do that, so we can go global much quicker,” he ended. “The bigger challenge is really going to be where do we focus and what do we say no to rather than what do we say yes.” 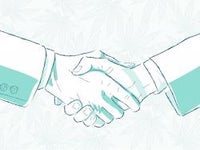 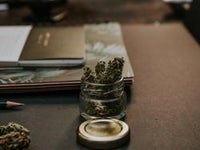 Don’t miss this opportunity to connect with THE cannabis movers and shakers from across the globe during Benzinga’s Virtual Cannabis Capital Conference on October 15. read more 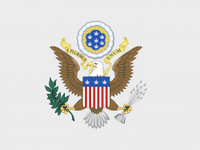